Combining data from NASA's Chandra X-ray Observatory with radio observations and computer simulations, an international team of scientists has discovered a vast wave of hot gas in the nearby Perseus galaxy cluster. Spanning some 200,000 light-years, the wave is about twice the size of our own Milky Way galaxy.

The researchers say the wave formed billions of years ago, after a small galaxy cluster grazed Perseus and caused its vast supply of gas to slosh around an enormous volume of space.

"Perseus is one of the most massive nearby clusters and the brightest one in X-rays, so Chandra data provide us with unparalleled detail," said lead scientist Stephen Walker at NASA's Goddard Space Flight Center in Greenbelt, Maryland. "The wave we've identified is associated with the flyby of a smaller cluster, which shows that the merger activity that produced these giant structures is still ongoing."

A wave spanning 200,000 light-years is rolling through the Perseus galaxy cluster, according to observations from NASA's Chandra X-ray Observatory coupled with a computer simulation. The simulation shows the gravitational disturbance resulting from the distant flyby of a galaxy cluster about a tenth the mass of the Perseus cluster. The event causes cooler gas at the heart of the Perseus cluster to form a vast expanding spiral, which ultimately forms giant waves lasting hundreds of millions of years at its periphery. Merger events like this are thought to occur as often as every three to four billion years in clusters like Perseus.
Credits: NASA's Goddard Space Flight Center
Download HD video and additional images from NASA's Scientific Visualization Studio

A paper describing the findings appears in the June 2017 issue of the journal Monthly Notices of the Royal Astronomical Society and is available online.

Chandra observations have revealed a variety of structures in this gas, from vast bubbles blown by the supermassive black hole in the cluster's central galaxy, NGC 1275, to an enigmatic concave feature known as the "bay." 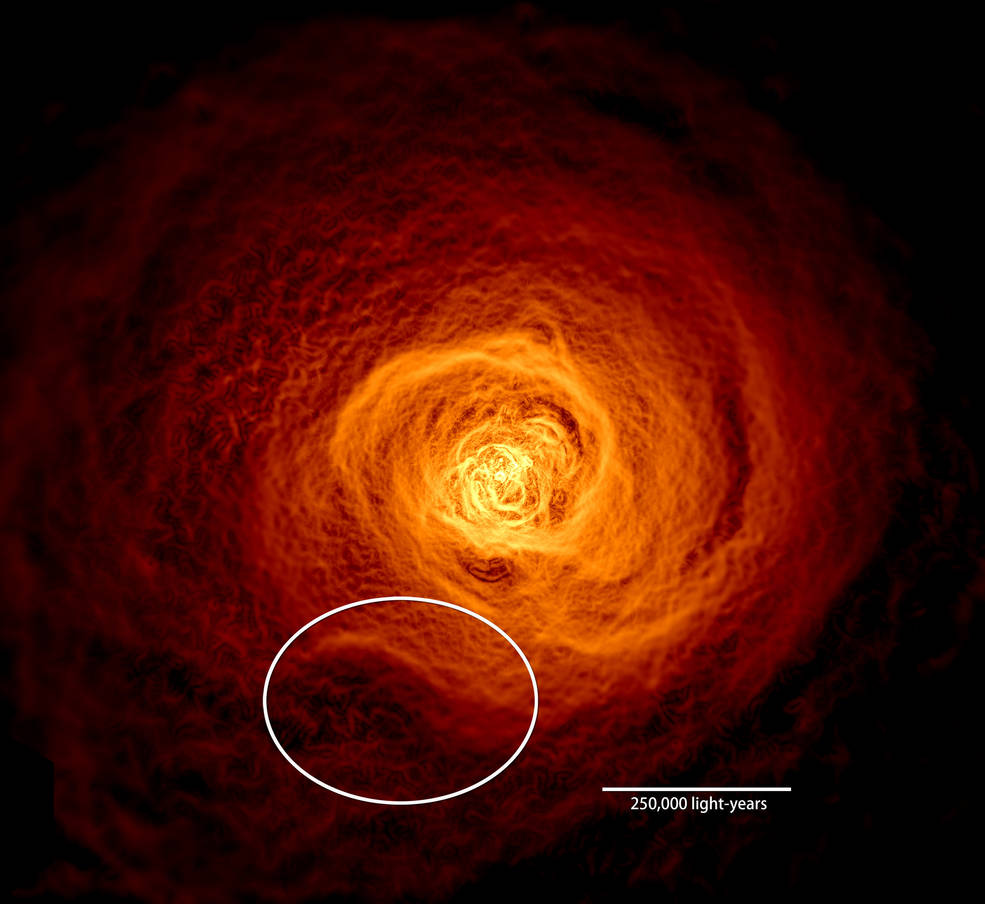 This X-ray image of the hot gas in the Perseus galaxy cluster was made from 16 days of Chandra observations. Researchers then filtered the data in a way that brightened the contrast of edges in order to make subtle details more obvious. An oval highlights the location of an enormous wave found to be rolling through the gas.
Credits: NASA's Goddard Space Flight Center/Stephen Walker et al.

The bay's concave shape couldn't have formed through bubbles launched by the black hole. Radio observations using the Karl G. Jansky Very Large Array in central New Mexico show that the bay structure produces no emission, the opposite of what scientists would expect for features associated with black hole activity. In addition, standard models of sloshing gas typically produced structures that arc in the wrong direction.

Walker and his colleagues turned to existing Chandra observations of the Perseus cluster to further investigate the bay. They combined a total of 10.4 days of high-resolution data with 5.8 days of wide-field observations at energies between 700 and 7,000 electron volts. For comparison, visible light has energies between about two and three electron volts. The scientists then filtered the Chandra data to highlight the edges of structures and reveal subtle details.

Next, they compared the edge-enhanced Perseus image to computer simulations of merging galaxy clusters developed by John ZuHone, an astrophysicist at the Harvard-Smithsonian Center for Astrophysics in Cambridge, Massachusetts. The simulations were run on the Pleiades supercomputer operated by the NASA Advanced Supercomputing Division at Ames Research Center in Silicon Valley, California. Although he was not involved in this study, ZuHone collected his simulations into an online catalog to aid astronomers studying galaxy clusters.

"Galaxy cluster mergers represent the latest stage of structure formation in the cosmos," ZuHone said. "Hydrodynamic simulations of merging clusters allow us to produce features in the hot gas and tune physical parameters, such as the magnetic field. Then we can attempt to match the detailed characteristics of the structures we observe in X-rays."

One simulation seemed to explain the formation of the bay. In it, gas in a large cluster similar to Perseus has settled into two components, a "cold" central region with temperatures around 54 million degrees Fahrenheit (30 million Celsius) and a surrounding zone where the gas is three times hotter. Then a small galaxy cluster containing about a thousand times the mass of the Milky Way skirts the larger cluster, missing its center by around 650,000 light-years.

This animation dissolves between two different views of hot gas in the Perseus galaxy cluster. The first is Chandra's best view of hot gas in the central region of the Perseus cluster, where red, green and blue indicate lower-energy to higher-energy X-rays, respectively. The larger image incorporates additional data over a wider field of view. It has been specially processed to enhance the contrast of edges, revealing subtle structures in the gas. The wave is marked by the upward-arcing curve near the bottom, centered at about 7 o'clock.
Credits: NASA/CXC/SAO/E.Bulbul, et al. and NASA's Goddard Space Flight Center/Stephen Walker et al.

The flyby creates a gravitational disturbance that churns up the gas like cream stirred into coffee, creating an expanding spiral of cold gas. After about 2.5 billion years, when the gas has risen nearly 500,000 light-years from the center, vast waves form and roll at its periphery for hundreds of millions of years before dissipating.

These waves are giant versions of Kelvin-Helmholtz waves, which show up wherever there's a velocity difference across the interface of two fluids, such as wind blowing over water. They can be found in the ocean, in cloud formations on Earth and other planets, in plasma near Earth, and even on the sun.

"We think the bay feature we see in Perseus is part of a Kelvin-Helmholtz wave, perhaps the largest one yet identified, that formed in much the same way as the simulation shows," Walker said. "We have also identified similar features in two other galaxy clusters, Centaurus and Abell 1795."

The researchers also found that the size of the waves corresponds to the strength of the cluster's magnetic field. If it's too weak, the waves reach much larger sizes than those observed. If too strong, they don't form at all. This study allowed astronomers to probe the average magnetic field throughout the entire volume of these clusters, a measurement that is impossible to make by any other means.