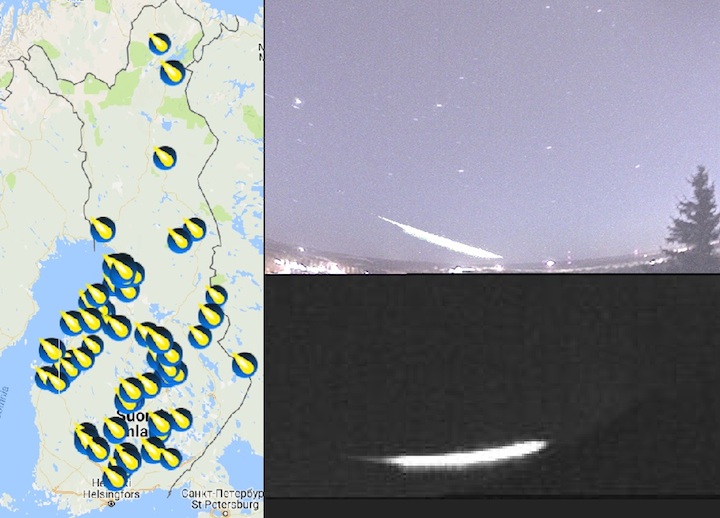 Wednesday morning came past the observation locations of Heaven guard on the map. In the upper right Aki Taavitsainen and Jani on Saturday as well as at the bottom right Jari Tuukkanen picture fireball near the horizon. Images Google Maps, Heaven guard / Jari tuukkanen, Aki Taavitsainen and Jani Lauanne
08/02/2017 | Mikko Suominen Marko Pekkola
Wednesday morning's bright fireball was visible almost everywhere in Finland
On Wednesday morning, 8.2. at 6.35 was seen a bright fireball that burned down a large extent the end of the atmosphere. Ursa Heaven guard-finding service has become an event for about 100 observations.

Possible minor survived in mid air forcing have been able to end up on the Russian side of the border. Initial estimated impact area is Salla direction.

"Morning Walk in the home in the alley when I stopped to stare at the strange light phenomenon," says Susanna Kiviniitty Snow from the river. "Fireball flew silently and was already very low down on the fly."

Fireball Members of the Group Jari tuukkanen (Karstula) and Aki Taavitsainen and Jani Lauanne (Mikkeli) were able to describe the body of air with automatic camera-asem under him.

"The main colors green light was moving from southwest to northeast fast, a height of about 20-30 degrees. After missed the reddish sparks", described Pentti Tiihonen, who saw Kuopio phenomenon affecting the southern motorway.