A tornado on Tuesday damaged the NASA facility in New Orleans where workers are building key components of the agency's new deep-space rocket.

The twister touched down before noon and ripped holes in the roof and walls of the sprawling Michoud Assembly Facility. NASA employees and contractors there are building the huge hydrogen and oxygen fuel tanksfor the heavy-lift rocket known as the Space Launch System.

A NASA statement said all personnel were accounted for. A damage assessment was underway late Tuesday afternoon.

Stephen C. Doering, manager of the SLS Stages Element Office for NASA, told The Washington Post that he was watching the twister from the parking lot when it moved toward the assembly facility. He and his colleagues ran inside to shelter in the restrooms, he said. “You could see it come in the parking lot. It took about a half a dozen cars and picked them up and knocked them over like rag dolls,” Doering said.

After the tornado passed, workers smelled gas and were ordered out of the building. But with other tornadoes reported in the area, everyone had to shelter in place again, he said.

Doering said he had heard of one injury but didn't know the severity. While the hardware for the new rocket was undamaged, he said, workers were busy patching holes in the building's exterior, hoping to prevent water damage to the elaborate and expensive equipment used to weld the big fuel tanks.

“We didn’t get to do a full damage assessment yet, because after the first [tornado] we had to shelter in place as two more of them came by,” he said.

With the SLS, NASA is planning the first uncrewed flight for late 2018. The first mission with astronauts is not expected until early in the next decade; that flight would put astronauts aboard the Orion capsule in orbit around the moon. NASA is not currently building a lunar lander.

A version of the SLS could potentially be used for missions to Mars.

Recovery efforts are underway at NASA’s Michoud Assembly Facility in New Orleans, which was impacted by a tornado at 11:25 a.m. CST Tuesday. All 3,500 employees at the facility have been accounted for, with five sustaining minor injuries.

“Our hearts go out to our employees and the people in New Orleans who have suffered from this serious storm,” said Keith Hefner, director of the facility. “The safety of our team is always our main concern, and we are pleased to report that we’ve identified only minor injuries.”

The facility is currently closed and will remain closed Wednesday, Feb. 8, with only emergency personnel on site to continue damage assessments. All NASA employees and tenants who are not involved in emergency operations have been evacuated. Local law enforcement helped ensure employees arrived home safely. All utilities and services to the facility are being secured and efforts are underway to restore power.

At this time, emergency personnel have identified damage to building numbers 103, 350 and additional structures. Building 103, Michoud’s main manufacturing building, has roof damage in several areas. Approximately 200 parked cars were damaged, and there was damage to roads and other areas near Michoud.

“Michoud has a comprehensive emergency plan that we activated today to ensure the safety of our people and to secure our facilities,” said Hefner. “I am proud of our dedicated team onsite who are successfully implementing that plan.”

Hardware for NASA’s heavy-lift rocket, the Space Launch System, and the Orion spacecraft is secure, and no damage from the storm has been idenfied to hardware or the barge Pegasus docked at Michoud. 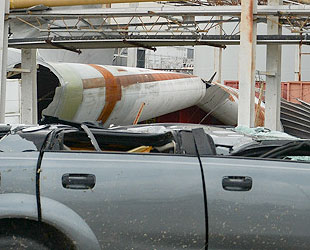 — NASA's first space shuttle external tank to stand on a launch pad was destroyed on Tuesday (Feb. 7) when a tornado impacted the New Orleans facility where it was built 40 years ago.

The external tank-ground vibration test article (ET-GVTA) was in outdoor storage at the Michoud Assembly Facility in Louisiana when the storm hit the site at Tuesday morning. Reports of the tank being "sent flying and destroyed" were shared by people at the facility.

Five people, out of the facility's 3,500 employees, suffered minor injuries as a result of the tornado, which left several structures and about 200 cars with damage. The facility's main manufacturing building sustained damage to its roof, but the hardware for NASA's Space Launch System (SLS) heavy-lift rocket and Orion spacecraft were unaffected, per an early assessment by the space agency. 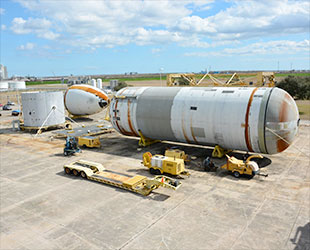 The tornado was one of at least seven that were reported to have touched down in southeast Louisiana on Tuesday.

"The safety of our team is always our main concern," said Keith Hefner, director of the Michoud Assembly Facility, in a statement released by NASA on Tuesday. "Our hearts go out to our employees and the people in New Orleans who have suffered from this serious storm."

Founded in 1940 to build wooden airplanes for World War II, the Michoud Assembly Facility was transferred to NASA control in 1961 to support construction of the massive first stages for the Saturn IB and Saturn V rockets used during the Apollo program. After the missions to the moon ended, the facility produced the external tanks for the 135 space shuttle missions.

ET-GVTA was one of the first three external tanks that was manufactured at Michoud. Built to represent a flight article, it was not covered in insulating foam like those that would later launch to space, but was painted white. 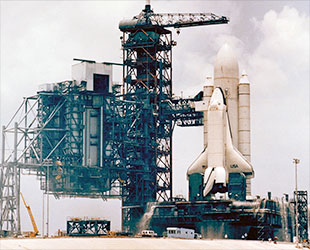 "ET-GVTA played a critical role in the early testing for the space shuttle," said Dennis Jenkins, the author of the new book, "Space Shuttle: Developing an Icon, 1972-2013" and a former project manager for the space shuttle program. "It was the subject of several iconic photos."

First used with the prototype orbiter Enterprise for a series of vibration tests at NASA's Marshall Space Flight Center in Alabama, ET-GVTA helped establish the bending modes and nodal crossing points to validate various analyses and locate the rate gyros and accelerometers used by the flight control system.

It was then moved to the Kennedy Space Center in Florida for a series of facility verification tests, culminating with it being paired with two solid rocket boosters and mounted to Enterprise in the Vehicle Assembly Building and moving to Launch Complex 39A for the first time.

ET-GTVA was subsequently shipped back to Louisiana for its possible refurbishment into a flight tank, but that did not happen. Instead, it was disassembled and its liquid oxygen and liquid hydrogen tanks, as well as its interstage, were put into storage, eventually being parked outside Building 103, the facility's main manufacturing building. 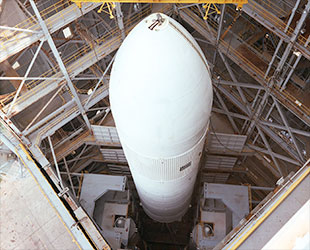 "Reportedly, NASA intended to use the pieces of ET-GVTA for an exhibit showing the major structures of the external tank — something that will obviously not happen," Jenkins wrote in an email to collectSPACE.

Of the other two test tanks built, the structural test article (STA) was displayed at the Kennedy Space Center Visitor Complex for 17 years before being moved to Green Cove Springs, Florida, to wait its exhibit by the Wings of Dreams Aviation Museum. The main propulsion test article (MPTA) is on outdoor display at the U.S. Space & Rocket Center in Huntsville, Alabama, mounted to two solid rocket boosters and NASA's Pathfinder orbiter mockup.

Until last year, the Michoud Assembly Facility was also the home to ET-94, the last remaining built-for-flight external tank, and S-IC-15, the Saturn V first stage that would have launched the Apollo 19 mission had it not been canceled.

The tank was transported to the California Science Center in Los Angeles and is now undergoing preparations for its vertical exhibit with space shuttle Endeavour. The Saturn V first stage was moved for display at the INFINITY Science Center, near NASA's Stennis Space Center in Mississippi.