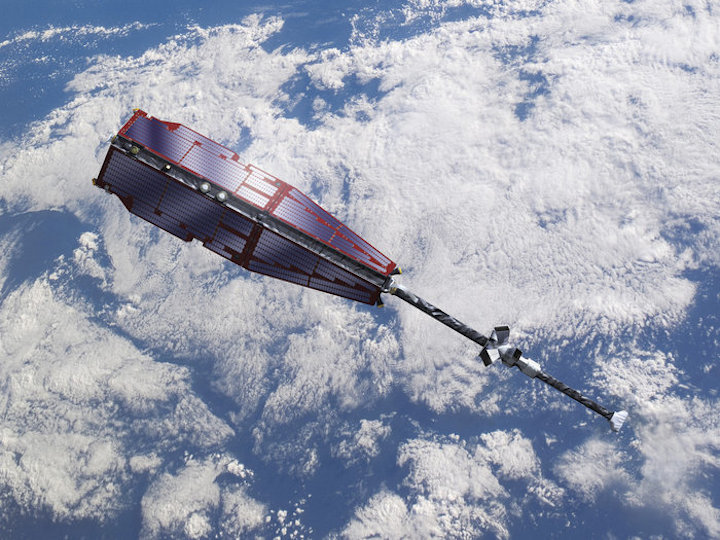 Swarm is ESA's first Earth observation constellation of satellites. The three identical satellites are launched together on one rocket. Two satellites orbit almost side-by-side at the same altitude - initially at about 460 km, descending to around 300 km over the lifetime of the mission. The third satellite is in a higher orbit of 530 km and at a slightly different inclination. The satellites' orbits drift, resulting in the upper satellite crossing the path of the lower two at an angle of 90 in the third year of operations. The different orbits along with satellites' various instruments optimise the sampling in space and time, distinguishing between the effects of different sources and strengths of magnetism. The three-satellite Swarm mission aims to unravel one of the most mysterious aspects of our planet: the magnetic field. The field protects our planet from cosmic radiation and charged particles that bombard Earth in 'solar winds'. Without this protective shield, the atmosphere as we know it would not exist, rendering life on Earth virtually impossible. By analysing the different characteristics of the field, the mission will provide new insight into many natural processes, from those occurring deep inside the planet to weather in space caused by solar activity. In turn, this information will yield a better understanding of why the magnetic field is weakening. Swarm is ESA's fourth Earth Explorer mission, following GOCE, SMOS and CryoSat. Image courtesy ESA-P. Carril, 2013.

A space debris avoidance manoeuvre planned for ESA's Swarm mission proved unnecessary last week, but the close encounter highlighted the growing risk from space debris. It's an increasingly common occurrence: ESA's Space Debris Office starts monitoring a piece of debris - there are over 22 000 tracked in space now - that could pass near one of the Agency's satellites.

Additional tracking data indicate the object - maybe a chunk of some old satellite already long abandoned - might pass too close, within the 'risk threshold' that surrounds each active spacecraft.

This is exactly what happened on 24 January, when space debris experts at ESA's mission control centre in Darmstadt, Germany, alerted the Swarm flight control team that one of their three satellites, Swarm-B, would have a close call from a 15 cm chunk of the former Cosmos 375.

Launched in 2013, the trio of Swarm satellites are measuring and untangling the different magnetic fields that stem from Earth's core, mantle, crust, oceans, ionosphere and magnetosphere.

The close encounter between Swarm-B and the debris was forecast to take place on 25 January at 23:11 GMT on the following day.

At that point, a 'team of teams' began taking action to assess the situation, plan a debris avoidance manoeuvre and upload a set of commands to execute the manoeuvre - all before the forecast flyby just 39 hours away.

The situation was complicated by the fact that there were only two communication slots - a radio link established when Swarm-B flies over its ground station at Kiruna, Sweden - prior to the flyby.

Taking action
Following a first coordination meeting on Tuesday morning, engineers from the Swarm mission control team began working with specialists from flight dynamics, from the Space Debris Office and from the Swarm project team at ESA's centre near Rome to prepare the manoeuvre.

Following a detailed analysis by the flight dynamics and space debris experts, it was determined that boosting Swarm-B higher in its orbit by about 35 m would do the trick.

"There was at this point still some uncertainty in our knowledge of the debris object's trajectory, but we were confident that this boost would reduce the risk of a too-near flyby, or even an actual collision, to below the acceptable threshold set by the mission managers," said Holger Krag Head of ESA's Space Debris Office.

The boost would require the satellite to fire its cold-gas thrusters for about 44 seconds.

Flight control engineers used data files provided by flight dynamics to prepare a set of commands for upload to Swarm-B. The craft would be commanded to shut down its science instruments, reorient itself in space, execute the manoeuvre on its own (out of contact with ground) and then reconfigure to resume science, all overnight between 25-26 January, starting around 45 minutes before the encounter.

Just after breakfast on Wednesday morning, 15 hours before the flyby, the commands were uplinked, fully enabled and ready to execute automatically without any further action from mission control.

"This was a good plan, and it had the primary aim of ensuring spacecraft safety now and to provide some good margin against a possible future encounter with this debris object," said Swarm mission manager Rune Floberghagen.

Gathering the latest facts
On Wednesday morning, however, two new batches of information were received. First, during the same ground station communication slot when the manoeuvre commands were being uploaded, Swarm-B also sent down a fresh set of GPS data recorded during the previous 20 hours. The highly precise data provided a record of the satellite's actual current orbit.

"This allowed us to make a fresh orbit determination and prediction, and this could be used to reduce uncertainty in the satellite's position at the forecast conjunction time this evening to very small values," said Detlef Sieg, the flight dynamics specialist assigned to Swarm.

Second, the Space Debris Office received a fresh set of tracking information from the debris tracking radar system operated by the US armed forces, providing new and more precise data on the impending object's orbital trajectory.

"As this was acquired less than 24 hours prior to the forecast conjunction, it had lower uncertainty related to the object's position during the conjunction than previous tracking data," said Klaus Merz an analyst in the Space Debris Office.

Klaus and his team ran a number of detailed manual calculations using the new object tracking data and ESA's own debris assessment software tools, assessing the risk of a collision if the avoidance manoeuvre was performed - and if one was not.

"As a result of the reduced uncertainties in the object's trajectory, the risk of collision is now well below the mission's threshold," said Klaus.

Last chance to abort
Knowing that time was crucial, mission manager Rune Floberghagen asked everyone for their recommendations at a final 'go/no-go' meeting at 10:40 GMT on Wednesday morning.

With close flyby now no longer presenting an unacceptable risk, it was clear the satellite could be left in its current orbit.

"Further, we could confirm that removing the uploaded commands could be done in a very safe way and would have no effect on the continuing operation of Swarm," said spacecraft operations manager Elia Maestroni.

"Therefore the decision was taken to abort the manoeuvre and return the satellite to its usual science-gathering timeline."

And Swarm-B - a marvellous satellite on a vital science mission 500 km above our heads - continued safely on its way, oblivious to all the human activity focused on its wellbeing in the past 36 hours.

The future is now
"In the end, the situation this week turned out not to need a debris avoidance manoeuvre," said Holger.

"While this is the case with the majority of initial alerts, we are nonetheless seeing an increase in the number of avoidance manoeuvres that must be fully executed."

At ESA's Space Debris Office, the number of potential conjunction events that must be analysed for a mission like Swarm is several hundred per year. Of these, typically 10 turn out to be critical and deserve particular attention.

With additional updates leading to improved orbit information - like this one with Swarm-B - most of these occurrences turn out to be false alerts. Ultimately, a typical Earth observation mission has to conduct a collision manoeuvre once or twice a year.

Compared to the situation before 2007 (when a Chinese satellite fragmented in orbit during an antisatellite missile test and before the collision between Iridium-33 and Cosmos-2251 happened), this is roughly a duplication of the avoidance actions.

"This highlights the need for all space-faring organisations to strictly follow debris mitigation guidelines that aim to limit the creation of new debris," said Holger.

"The current space debris situation is already at a 'tipping point' in some orbits. This requires urgent action."