A new analysis of a rare Mars meteorite resets the clock for when our neighboring planet was covered with lava flows. 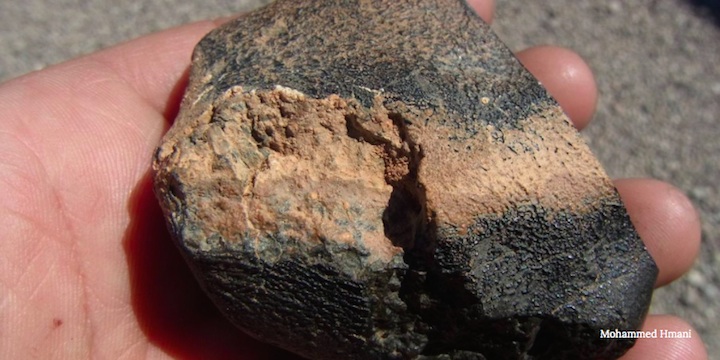 A new analysis of a half-pound meteorite from Mars shows that the Red Planet was volcanically active as far back as two billion years ago, making Mars home to not only the biggest volcanoes in the solar system, but the most long-lived ones as well.

The meteorite, known as Northwest Africa (NWA) 7635, was found in 2012 in Algeria (pictured above). A new isotopic analysis, headed by University of Houston geologist Tom Lapen, ties NWA 7635 with 10 other Martian meteorites that likely were blasted out from the same volcano or lava plain by an impacting asteroid or comet about 1.1 million years ago.

"We don't know exactly where these stones were launched from, but it is likely that they are from the volcanic plains and shield volcanoes of the Tharsis or Elysium regions on Mars," Lapen told Seeker.

"The discovery of a single Mars ejection site with over 2 billion years of stacked lava flows is critical for understanding the volcanic history of Mars," Lapen said. "These data are exciting because this is the first direct evidence for the absolute timing, mantle source characteristics, and spatial associations of volcanism on Mars."

The research also "sets a template for further testable hypotheses regarding the periodicity of magmatism, timing of volcanic gas fluxes into the atmosphere, and the nature of mantle dynamics over most of Mars' history," he added.

The analysis confirms that some of the oldest volcanoes in the solar system are located on Mars.

Mars already was known to host the largest known volcano in the solar system, Olympus Mons, which is as wide as the state of Arizona and about 16 miles high, according to NASA.

NWA 7635 is among about 124 meteorites from Mars that have been recovered on Earth, NASA's Mars Meteorite website shows.