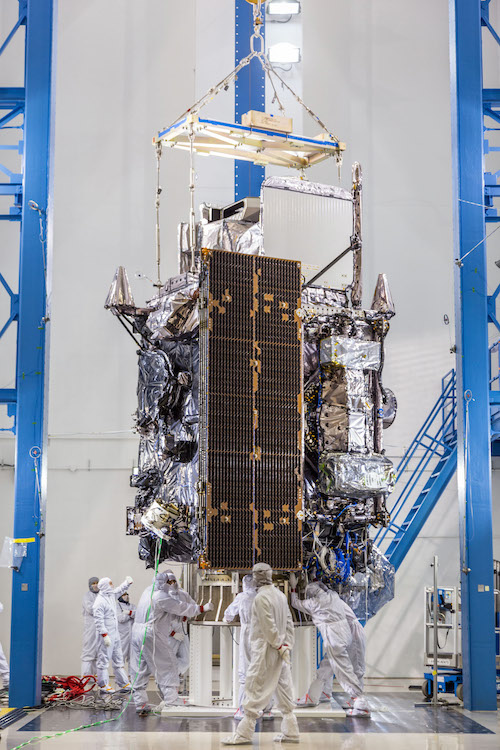 DENVER, Lockheed Martin (NYSE: LMT) has completed assembly of NOAA's GOES-S weather satellite and is now beginning critical mechanical and environmental testing of the spacecraft. GOES-S is the second of four next-generation geostationary weather satellites called the GOES-R series, and will provide a major improvement in our nation's weather observation capabilities leading to more accurate and timely forecasts, watches and warnings.

The GOES-S satellite is now undergoing environmental testing to simulate the conditions of launch and the extreme environment the satellite will experience in space. It recently completed a reverberant acoustics test and sine vibration test, both designed to expose the satellite to the sound and vibrations of a launch on a United Launch Alliance Atlas V 541 rocket.

"Mechanical and environmental testing is an important time for the program," said Tim Gasparrini, vice president and GOES-R Series program manager at Lockheed Martin Space Systems. "This period validates the satellite's overall design, assembly workmanship, and survivability during launch and on-orbit operation in the cold vacuum of space."

In preparation for launch, the 20-foot-tall satellite will undergo a variety of tests including separation and deployment of solar arrays and antennas, shock tests, electromagnetic interference and compatibility testing, and thermal vacuum testing.

The first satellite in the series, GOES-R, was launched on Nov. 19 from Cape Canaveral Air Force Station, Florida. It recently was moved into its geostationary orbit and is going through a comprehensive post-launch test and checkout phase. Now in orbit, NOAA has officially changed its name to GOES-16.

NOAA funds, manages and will operate the GOES-R Series satellites. NASA oversees the acquisition and development of the GOES-R spacecraft, instruments and launch vehicle. The program is co-located at NASA's Goddard Space Flight Center in Greenbelt, Maryland.