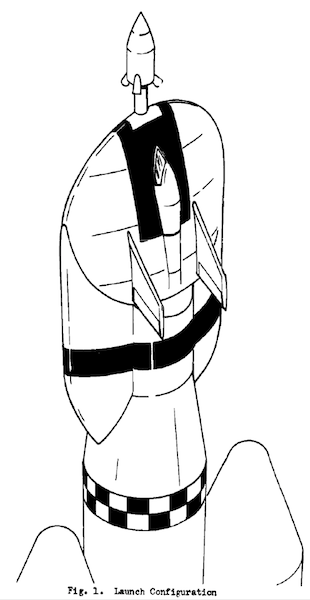 The USAF had the SAINT (Satellite Inspector for Space Defense) anti-satellite system under study since June 1958 and had awarded the development contract to RCA for a three-phase Saint I unmanned program covering the Green Saint and White Saint inspection and satellite destruction spacecraft. Studies were also underway on Blue Saint, a Saint II follow-on manned vehicle. 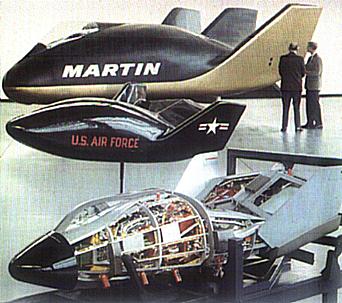 Blue Saint was seen as competing with the well-advanced Boeing X-20 Dynasoar manned glider program, and in October 1961 it was criticized by a USAF panel for over-optimistic schedule and budget. All of this was heavily classified. It is not known if there was a competitive bidding for Blue Saint, or if Convair submitted a proposal. It seems that Martin Aircraft was the winner, as it was connected with the related public experimental SV-5, X-23, and X-24 lifting body spacecraft in the early 1960's. Another player was McDonnell Aircraft, who was beginning work leading to the Isinglass reconnaissance spacecraft in 1965.

Against this turbulent background Earl Honeywell suddenly emerged in public at the Eighth Symposium on Ballistic Missile and Space Technology in San Diego on 17 October 1963 to describe in considerable detail Convair's ultimate derivative of Pye Wacket, the Manned Anti-Satellite System. This looks like it may have been Convair's losing proposal for Saint II. Making it public was rather remarkable given the deep black nature of Saint. However McNamara had essentially cancelled Saint in October 1962 and it is possible that there was no longer any prohibition in discussing it. Or it may have been deliberate misinformation, to hide the fact that behind the cancellation of Saint was a move to the deeper-black air-launched Isinglass program. For whatever reason, Honeywell was careful to note that his paper "...was the result of General Dynamics/ Pomona-funded research and in no way can be construed as having the endorsement of the Department of Defense or the U.S. Air Force". That research had begun during Pye Wacket Phase II, with the first report issued in March 1961, only a month after the FTV report.

The Manned Vehicle (MV) was designed for launch by the same man-rated Titan III launch vehicle in development for the Dyna Soar. The approach was that the MV would stand off at a safe fifty-mile distance from the target satellite while a small Interspector/Killer (I/K) device would rendezvous with the target, examine it up close, then destroy it on command if needed. This approach allowed the MV and the I/K devices to have very large delta-V capabilities (7000 feet/second for the MV and 9600 ft/sec for the I/K). This would allow a quick response. Any satellite could be intercepted within 100 minutes with launch at almost any time. Alternatively multiple satellites in varying orbits could be intercepted on a single mission. This was in contrast to coplanar schemes like Saint I or the Soviet IS-A ASAT, which had to be launched into the orbital plane of the target. Their limited maneuverability meant tight once- or twice-daily launch windows. The scheme also allowed the crew to remain at a safe distance from the hostile satellite. Soviet military satellites were in fact equipped with self-destruct charges, although it is not known if US intelligence was aware of this. 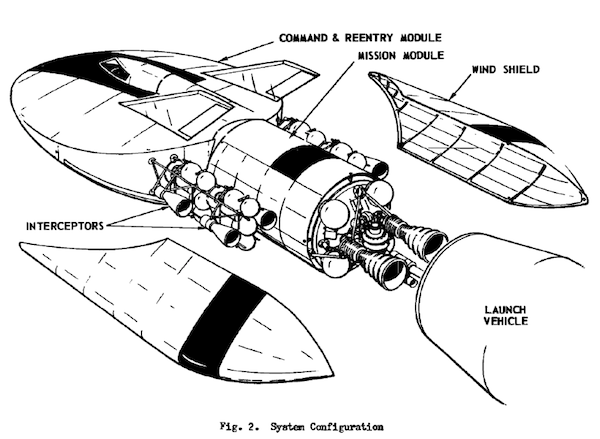 The MV in orbit had two modules. Weight breakdown was as follows: 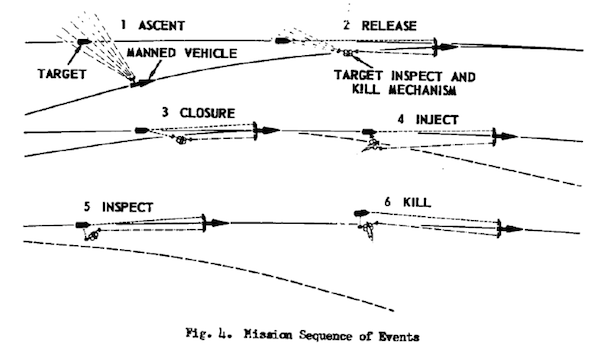 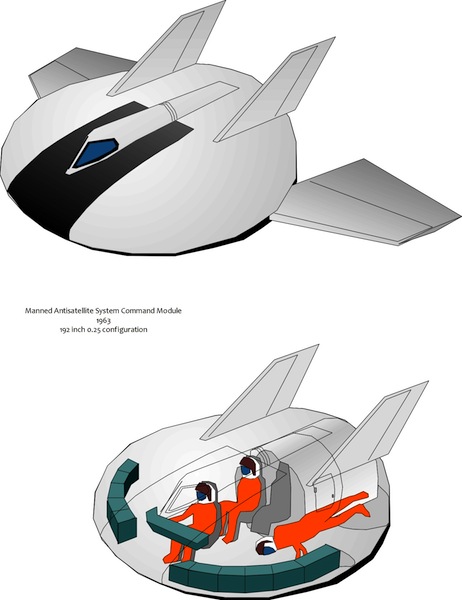 The CM was a lenticular reentry vehicle with a crew of three based on Pye Wacket work. The this was the only module of the system that returned to earth. The cockpit section could be separated from the command module at subsonic speeds for abort on the launch pad, during the initial phases of ascent, or in case of difficulties in landing. 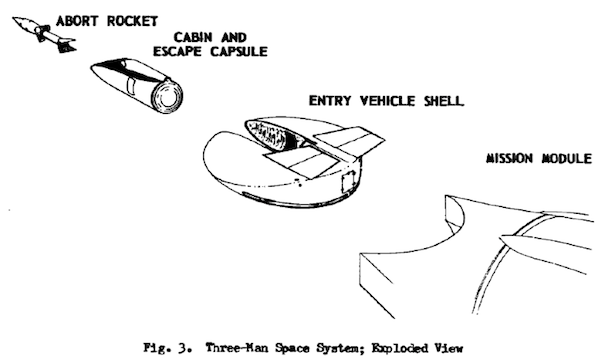 The CM would reenter at a 60 to 75 deg angle of attack, presenting a thin blunt surface which was optimum for deceleration at higher altitudes. Trajectory control woud be by rolling while still maintaining the high angle of attack. The lenticular vehicle minimized heat shield requirements while providing a high hypersonic L/D ratio, maximizing cross range capability. Once the saucer slowed down to transonic speed, horizontal stabilizers were deployed.

The 16-foot-diameter CM would have been rather cramped. The thickness of the saucer is not indicated, but even with the cockpit section above the top of the saucer, the cockpit could not have had a height much greater than five feet and the saucer thickness had to be greater than the 21% maximum considered for Pye Wacket. How the deployable wings, and landing gear or skids were housed is not clear. One crew member at a time could work their way from the cockpit module through a small hatch into a claustrophobic pressurized cabin which at least allowed them to stand up while working. The 8500 pound estimated mass of the densely-packed vehicle seems optimistic compared to the 13,000 pounds of the Apollo command module. 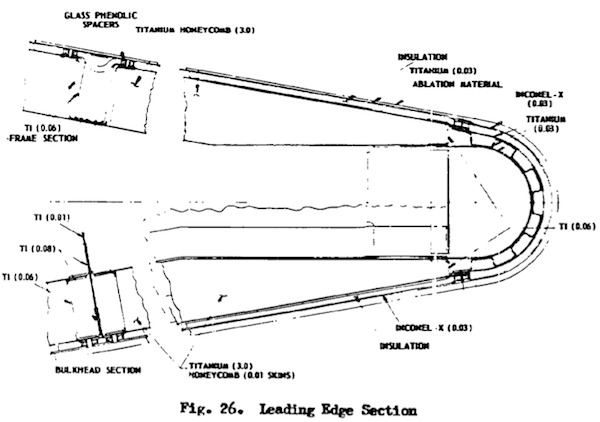 The MM Mission Module consisted of four satellite inspector/killer mechanisms the fire control radar, and the propulsion system for orbital maneuvers. This propulsion system is not described in detail, but appears to be a smaller-diameter version of the Titan Transtage with about half the propellant load. 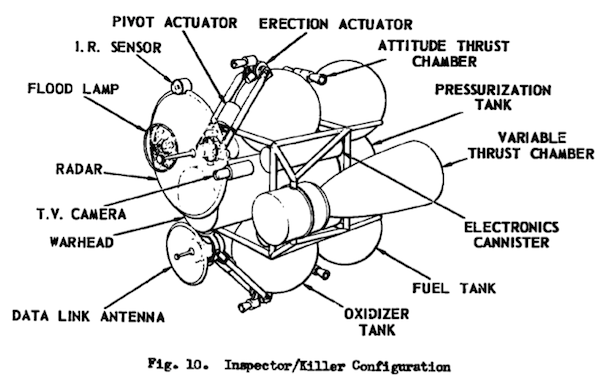 The I/K devices had two main engines of 1600 lbs thrust each and six separate attitude control engines of 5 lbs thrust each. Aside from the propellant and pressurization tanks, the device carried a data link antenna, target tracking radar antenna, TV camera, IR sensor, warhead, and a flood lamp for inspection while in the earth's shadow. The radar and data link antenna were folded for minimum storage volume in the mission module. The I/K device fit in a volume of 47 in. by 38 in. by 38 in. when packaged in the launch configuration.

The I/K's two gyro-stabilized antennas tracked the target and the MV simultaneously. The guidance system used these two positions to keep the device oriented horizontally between the MV and the target.

Optical inspection of the target would be accomplished by the MV using telescopes. In the earth's shadow the I/K device would illuminate the target. Any necessary detailed assessment would be made by a fly-around of the target by the I/K using television, infrared, and radiation sensors. Commands to the I/K and data from it would be relayed via a PCM/FM data link.

The I/K semi-active seeker was a pulse receiver compatible with the fire control radar on the manned vehicle. A home-on-jam mode was also be provided. If the target took evasive maneuvers, the I/K would fly a modified proportional navigation course to intercept. The I/K's shaped charge fragmenting warhead had a theoretical kill probability of 95.3% for a 2-square-foot target with an aiming error of 10 ft.

The I/K propellant was nitrogen tetroxide / 50% hydrazine - 50% unsymmetrical dimethyel hydrazine. The 3200 lb thrust provided a 12 G acceleration. Packaging requirements required the use of two chambers with a 30:1 nozzle area ratio and two sets of propellant tanks. Total weight of each I/K was 473 pounds, of which 290 lbs was propellant. Electronics, the communication link, and inspection system took up 48 pounds, the warhead 38 pounds, the dry mass of the propulsion system 96 pounds, with only 8 pounds for the light-weight structure. 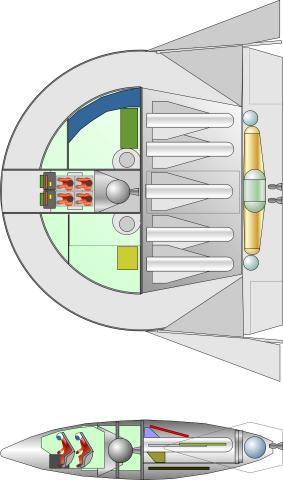 The highest priority target would be an enemy orbital bomber. This was not a fantasy; such spacecraft were under study and development in both countries. This would require sensors for nuclear bomb detection; target mass determination; multispectral electromagnetic radiation detection. A decoy exterminator function would be necessary in case an orbital bomber went into action. None of these capabilities was included in the initial design, but could be developed in the future.

In one scenario ferret equipment could be fitted on the I/K to allow it to monitor enemy communications. It would loiter near the target and proceed with destruction only when the target received an order from the ground to initiate hostile operations. It was also possible that some "clever device" could be installed on the I/K to reveal and destroy decoys without requiring the firing of the warhead.

After the 17 May 1963 appearance Earl Honeywell disappears completely from the documentary record. No further papers have been declassified to date that appear with his name or that of the elusive D R Geise. Public records show that he continued to live in the Pomona area, probably continuing to work for General Dynamics. His wife passed away on 7 October 1969, and he remarried on 5 February 1971. Sometime before 1993 he returned to the Seattle, Washington area. He died there on 9 October 1998 and was buried at Tahoma National Cemetery. On the other hand Hatalsky and Velton had well-documented careers and continued at General Dynamics Pomona until retirement.

Did Earl Honeywell continue his work on deep black programs? Or was Pye Wacket the young engineer's biggest project? Was he, like Orson Welles, someone who lived his life in reverse, with the biggest accomplishment being followed by decades of mundane work?

On the other hand it is known is that the Air Force continued to pursue manned spaceflight on behalf of the CIA. By 1964 there were competing designs for an air-launched manned reconnaissance spacecraft by General Dynamics Fort Worth and McDonnell Saint Louis. It is possible Earl Honeywell was involved with the Convair project. However the nod seems to have gone to McDonnell, who pursued development of Isinglass until 1968. Officially, neither of these concepts were found to have advantages in comparison to satellites to justify the high development and operating risk and costs.

Then in March 2006 Aviation Week and Space Technology made the astounding claim that the United States had developed a reusable two-stage-two-orbit manned spacecraft in the 1990's, dubbed Blackstar, and flown it on numerous orbital and suborbital missions. Development began after the Challenger shuttle disaster in 1986 and the Blackstar was only retired in 2005. If this system actually existed and was flown, the history of manned spaceflight would have to be revised. 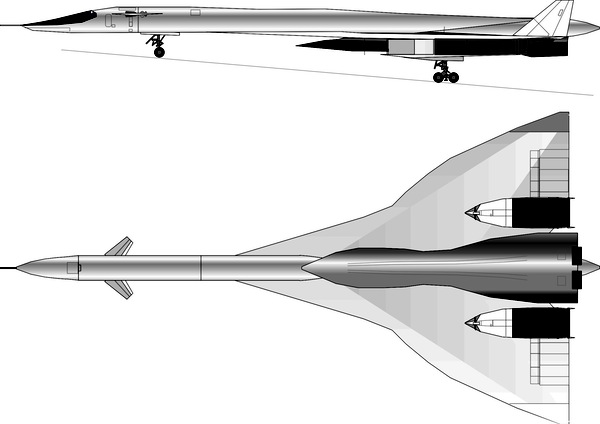 The first stage of the Blackstar system was said to be a Mach 3+ winged air-breathing first stage evidently developed from North American's XB-70 bomber. The second stage was the XOV manned eXperimental Orbital Vehicle lifting body. The system was developed by a "consortium of US aerospace companies" at the behest of an "unspecified US government agency". The system was so classified that it remained unknown to the nation's top military and civilian space planners, while they labored to design, but never developed, an equivalent white-world system. Blackstar was designed to handle numerous missions: strategic reconnaissance; anti-satellite; quick-reaction small satellite launch; and delivery of small conventional warheads. 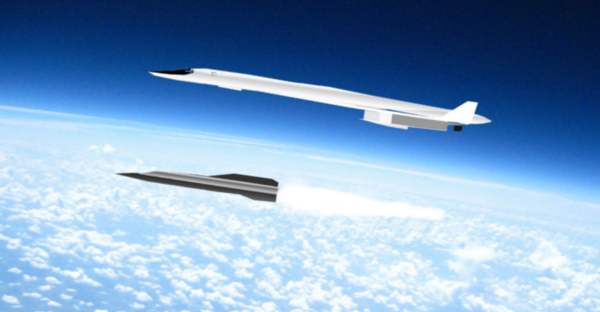 Did Blackstar exist? Did Earl Honeywell and the mysterious D R Geise have black-world careers building Pye Wacket derivatives? We may never know.

12-23 September 1960: Tests of a 1/3-scale Pye Wacket missile conducted in the PWT 16-Foot Transonic Circuit for the Convair Division of General Dynamics Corporation.

22 December 1960: Convair/Pomona Letter No. II-8837/2217 dated 22 December 1960 to Directorate of Procurement, Eglin AFB, Florida Phase III of the Feasibility Studies Proposal - involved fabrication of a number of flight vehicles and flight test of these missiles from a high speed sled (12 vehicles proposed).

McPhee, John, The Curve of Binding Energy: A Journey into the Awesome and Alarming World of Theodore B. Taylor, Farrar, Straus and Giroux,1994