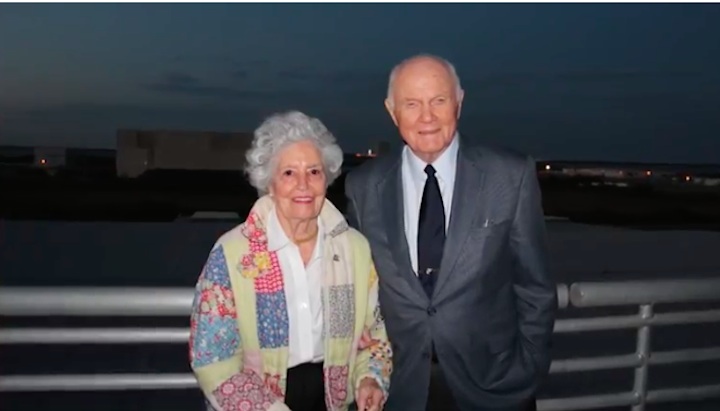 Vice President Joe Biden speaks at the ceremony held for John Glenn at the Mershon Auditorium on Dec. 17. Credit: Sheridan Hendrix | For The Lantern

John Glenn, the first U.S. astronaut to orbit Earth, was honored Saturday afternoon at a memorial celebrating his lifetime of public service. His family and friends, including Vice President Joe Biden, shared memories and stories of the American hero with an audience of almost 2,500 during the two-hour service at Ohio State’s Mershon Auditorium.

Glenn’s body was escorted down High Street from the Ohio Statehouse to OSU’s campus, preceded by a group of more than 30 Marines. His body lay in state in the Statehouse rotunda on Friday, an honor only eight others, including Abraham Lincoln, have had.

The service began with a prayer led by Amy Miracle, pastor of Broad Street Presbyterian Church. Miracle noted in her address that given Glenn’s lengthy resume of honors and accolades, it would prove difficult to fit them all into only one service.

“We won’t be able to capture the depth and breadth of his life, but we will try,” Miracle said. “We will try.”

University President Michael Drake called Glenn’s life of service “exemplary and inspiring,” and said that “as truly outstanding people do, he let his actions speak for himself.”

The John Glenn Institute for Public Service and Public Policy was founded at OSU in 1998, eventually becoming the John Glenn College of Public Affairs in 2015. The college was designed to inspire students to a life of public service. Drake said that Glenn served as a faculty member in the college “energetically and with distinction.”

“Every one of us on planet Earth has benefitted from having him on our side.” — Charles F. Bolden, Jr., administrator to NASA

General John Dailey, director of the National Air and Space Museum and retired U.S. Marine Corps general, recalled Glenn’s years as a Marine aviator who served in both World War II and the Korean War. Dailey said Glenn was “always a Marine,” and joked that he chose the branch “because we have the best looking uniforms.”

“The man himself was bulletproof,” Dailey said, recounting one flight where Glenn’s plane sustained damage from 250 bullets.

Dailey also mentioned Glenn’s “most memorable mission,” when he flew across the country in three hours, 23 minutes and 8.4 seconds, setting the then-record for the fastest transcontinental flight in 1957. University President Michael Drake speaks at the ceremony held for John Glenn at the Mershon Auditorium on Dec. 17. Credit: Sheridan Hendrix | For The Lantern

Charles F. Bolden, Jr., the current administrator of NASA under President Barack Obama and a former astronaut himself, said Glenn’s time as an astronaut in the space program is something that even today has planted a seed of inspiration in the hearts of many Americans.

Bolden also said that because of his accomplishments, NASA is still “standing on John Glenn’s shoulders,” even today as the program continues explorations on Mars.

“Every one of us on planet Earth has benefitted from having him on our side,” Bolden said.

Glenn became the first U.S. astronaut to orbit Earth on Feb. 20, 1962 while piloting the spacecraft Friendship 7. Three decades later, Glenn became the oldest person to travel into space aboard the Space Shuttle Discovery in 1998 at the age of 77.

Bolden said that Glenn’s political career was one of honor and respect “from both sides of the political spectrum,” a sentiment shared by many of Glenn’s fellow statesmen Saturday afternoon.

He also shared memories of Glenn from their years spent serving together in Congress, recalling a recent conversation Biden had with Secretary of State John Kerry, saying that it was Kerry who described Glenn best. Marines carry John Glenn’s casket out of the ceremony held for him at the Mershon Auditorium on Dec. 17. Credit: Sheridan Hendrix | For The Lantern

Ohio Sen. Sherrod Brown, who first met Glenn when he was a young Eagle Scout, said Glenn’s childhood was greatly influenced by the notion that “government can change people’s lives for the better.”

“John believed in an activist government and an active citizenship. And he warned that cynicism and apathy were a threat to democracy itself,” he said.

Glenn’s children, David and Lyn, shared memories of a different side of the American hero, one they knew only as “dad.”

David Glenn recalled stories his father shared of his childhood, of selling rhubarb and horseradish door-to-door and playing trumpet in the town band. He also recalled moments where his father taught him and his sister about the stars by laying on blankets on their front lawn. Annie Glenn exits the ceremony held at the Mershon Auditorium for her husband, John Glenn, on Dec. 17. Credit: Sheridan Hendrix | For The Lantern

Lyn Glenn said that despite her father’s national fame, he always “remained a small town boy” and “wore celebrity lightly.”

She also said that her father’s Ohio ties ran deep, even through his time as a senator. Lyn Glenn recalled that her father would often scour the ground of the Capitol for Buckeyes, which he would place in a bowl in his office. He did this so “visitors could take a little piece of Ohio home with them.”

No tribute or mention of John Glenn throughout the service was complete though without mention of his wife of 73 years, Annie.

Biden, who choked up recalling the marriage, said that John and Annie’s marriage was characterized by an “infectious love,” and, that of all his passions, one could feel his love for his wife the most.

John Glenn will be buried in a private ceremony in Arlington National Cemetery outside Washington, D.C. next week.