On April 30th, Ted Roe, of the National Aviation Reporting Center on Anomalous Phenomena (NARCAP), posted a UFO (not UAP) challenge on Facebook. He wanted people to explain some photographs taken by an amateur photographer of a UAP appear- ing near an aircraft back in 2005.1 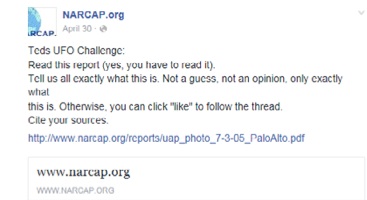 Several members of Gilles Fernandez’ Facebook group “UFO Pragmatism” saw the challenge and discussed the event. We noted several anomalies that indicated the story was not as good as indicated in the NARCAP report and some mistakes were made.

The report in question involves an amateur photographer, who was photographing the evening sky at the Montebello open space preserve, near Palo Alto, California. The date was July 3, 2005 and the time was 2031 PDT. Using his Canon digital SLR (A Rebel XT), the witness managed to record some images of an airplane that, according to him, was flying eastward towards Santa Cruz. The initial photograph was a wide angle image with the plane visible to the north of the observer. 2 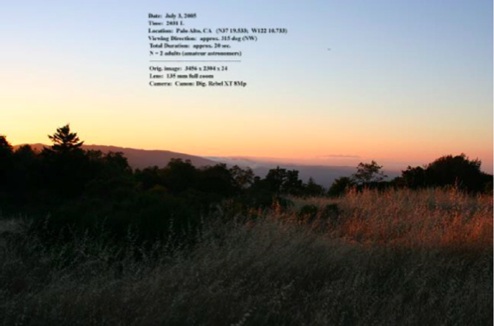 Seeing something odd, the witness then zoomed in and managed to record a bright dot that was traveling in the opposite direction of the aircraft. According to NARCAP, this was something truly anomalous that could not be explained.

NARCAP interviewed the witness and made all sorts of measurements from the photographs. They determined that the plane traveled north of the observer from an azimuth of 315 degrees to 030 degrees. 3 In addition to the wide angle image, the witness provided three images taken with a 135mm lens showing the aircraft and the UAP. These photographs were the centerpiece of their report.

What is wrong with this picture?

When our group chose to examine the report, several explanations were proposed but something caught everyone’s eye that made us question the analysis. The photographs of the airplane do not appear to match the description of what the witness stated happened. Even more of an issue is that NARCAP never noticed these problems and seemed to have blindly accepted the story told by the witness.

NARCAP makes much of the 135mm photographs of the plane pointing out where the different parts of the aircraft are. They even note the speck of reflected sunlight on the front of the aircraft’s nose. However, they ignored how the sun was illuminating the aircraft when they accepted the witness testimony that the plane was flying East or Southeast and was north of the photographer’s location. 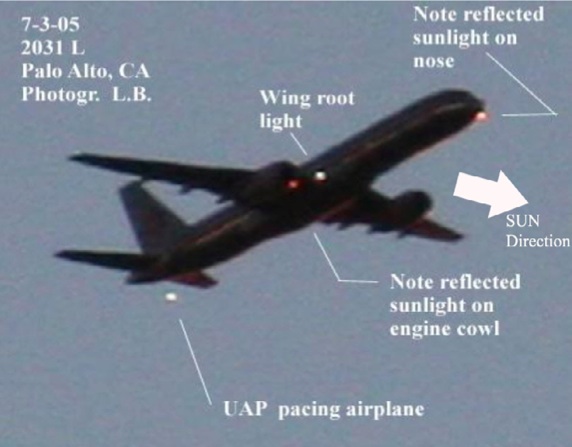 At the time of the event, the sun was setting in the west. Had the plane being flying to the East or SouthEast, the plane’s tail section and part of the starboard side of the aircraft would have been illuminated by the sun. Instead, as one can see in photograph #24, the port side of the plane is illuminated by the setting sun. This means the plane would had to have been flying in a northerly direc- tion (NW, N, NE) and be to the west or southwest of the observer. This contradicts what the witness stated and the path proposed by NARCAP. We do not even know if this was the same aircraft shown in the wide angle image taken a few seconds prior to this.

Wondering if there was confusion, several of the group tried to contact NARCAP on their Facebook page hoping to get access to the RAW images or, at least, the EXIF data, which was missing from the report. NARCAP claims that there are copyright concerns and would not provide the images or the EXIF data!5 While I can see not providing the images, I don’t understand how the EXIF

data could fall under the copyright protection. One would think that Dr. Richard Haines would have looked at the EXIF data and published it.

The reason we wanted to see the EXIF data was to see if the times for the photographs were in the same sequence as the published information. It seems that there appeared to be serious problems with what the witness described and what the photographs showed. This is indicative of a possible hoax. 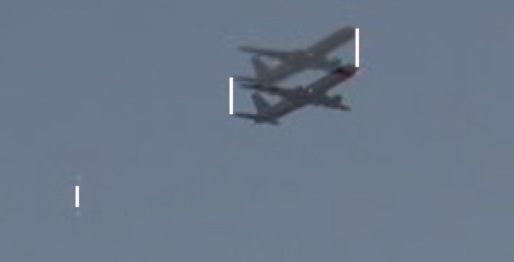 This indicates that they are the same photograph. Another image in the report, which is listed as coming from figure 4 (photograph #3) verifies this because it shows the UAP in a different location.7 How could a scientific paper, that has undergone peer review, allow such an error to appear? 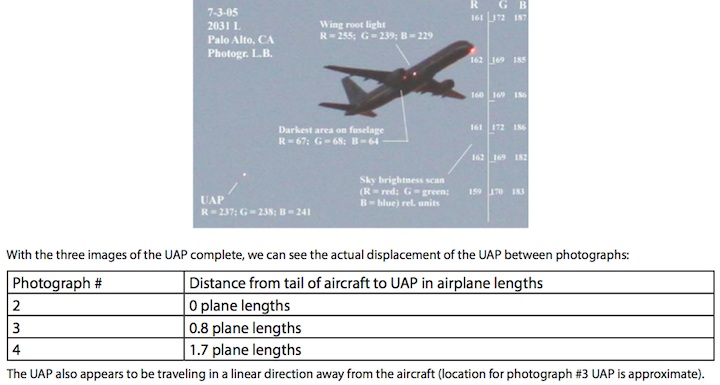 This demonstrates that the UAP was moving away from the aircraft at the same rate and in the opposite direction the plane was moving. It seems possible, based on this information, that the displacement may have been more to do with the plane’s motion and not the UAP itself.

A lack of proper analysis?

Without the raw data (the original images), it is hard to compute the angular distances as well as test the conclusions of NARCAP. Since NARCAP chose not to calculate these values or present measurements so others could reproduce the work, we are stuck with using cropped images that are difficult to evaluate.

NARCAP states that at the time of photograph #1, the plane was at a 40 degree angle of elevation.8 We are also told that this pho- tograph was taken using a 28mm lens. A 28mm lens has a vertical field of view (FOV) of about 30 degrees.9 If the plane was at a 40 degree elevation, it would be impossible for the plane to be in the same FOV as the horizon, which means NARCP did not bother to check up on the value provided by the witness. In photograph #1, the plane is only about 1/3rd of the FOV above the horizon, which is about 10 degrees.

NARCAP also states that the plane was 8211 feet from the camera.10 They don’t show how they calculated this but it appears to be based solely on the estimates by the witness. In photograph #4, the plane’s size is about 4.3% of the full horizontal frame shown. A 135 mm lens has a horizontal FOV of 10 degrees.11 This means the plane was about 0.43 degrees across. While the plane is not being seen from a right angle, an approximate distance can still be calculated. A Boeing 757 is 179 feet long, which means the distance to the plane was approximately 24000 feet. This is much further away than 8211 feet.

Another value that should have been determined by NARCAP was how fast the UAP was moving relative to the aircraft. By using the plane’s length and physical size in the image, one can compute the approximate speeds of the object as it is separating from the plane.

The report states that the camera was using burst mode, which produces approximately one frame per second.12 This is not correct. According to the Canon Rebel XT manual (as well as other sources), the actual frame rate for the camera in “burst mode” is three frames per second!13 This means that each frame is approximately 1/3rd of a second apart. Since the Boeing 757 is 179 feet long, the distance traveled between photographs 2 and 3 would be:

We don’t know the plane speed but we can estimate it based on the plane’s apparent pitch angle. Looking at the image, it appears that the plane is in a climb. Below 10,000 feet, climbing speed for a 757 is about 250 knots indicated air speed.14 Indicated air speed is not the same as true air speed but this can be converted using an on line calculator. 15 For a 5000 foot altitude, the plane would be flying at 275 knots true air speed (about 316 mph).This means the UAP would have to be flying in the opposite direction at about 9 mph IF it were at the same distance as the aircraft. If it were closer to the camera, it would be traveling much slower. With such a slow speed, one can assume it is possible that the UAP was essentially stationary in between photographs and that the separation had more to do with the aircraft’s motion than the UAP moving in the opposite direction.

What we appeared to have discovered is that there was little effort by NARCAP to evaluate the evidence properly and multiple errors have been made. Is this really a reliable UFO/UAP case when the hard data was apparently ignored in favor of the anecdotal report?

In an effort to obtain the information our group desired, I sent a letter to the witness (one of the Facebook group had found a potential address) because there was no e-mail address. I encouraged the witness to contact me so we could ask him questions about the photographs. He never responded. I can only assume the person I mailed the letter to was not the witness, the witness moved, or the witness did not want to discuss the matter for their own personal reasons. It was hoped that he could resolve the problems with the supposed path of the aircraft and the imagery sequence since NARCAP was unwilling/unable to provide the information upon request.

It might be important to note that the witness was not just a stray photographer, who had no interest in UFOs/UAPs prior to taking these photographs. He specifically mentioned listening to “Coast-to-Coast AM” and being aware of the National UFO Reporting Center for a significant period of time prior to submitting these UFO photographs for examination:

...the only reason I even thought to photograph what I was seeing was hearing Mr. Davenport on Coast-to-Coast AM for years now.16

Several in our group thought the white object was the planet Venus. With Venus stationary and the plane in motion, the object would appear to go in the opposite direction of the plane. My only problem with the Venus explanation was that the planet Venus was not that bright and only about 24 degrees from the sun at the listed date and time of the photographs.

I originally thought the object might be a hot pixel and the plane’s motion made the object appear to go in the opposite direction. Without the full frames being available, this theory could not be tested but after examining all the images, this explanation seems unlikely.

A very possible candidate is that it was a small balloon. NARCAP states that the winds do not support a balloon hypothesis because

they were blowing to the east and the object moved to the west. The object’s direction of movement is based on what the witness told them and not what we see in the photographs. Since less than a second separated the three photographs, one would see very little motion associated with an object being blown by the wind unless it was within a few hundred feet of the camera. As stated previously, if the UAP was a balloon floating relatively stationary in the sky and was closer to the camera than the plane, the plane’s motion would probably create all of the displacement seen between the three photographs.

Without more data, it is difficult to come up with a firm conclusion. Based on what we can determine from the photographs, the witness’ story is suspect as is the analysis in the report. Failure to share the raw information from the images indicates that NARCAP was never interested in giving those answering the challenge a fair opportunity to do so.

In my opinion, this report appears to contain editing errors and was poorly researched. The lack of EXIF data being provided, get- ting the images wrong, and failing to do simple angular calculations indicates some pretty poor analysis. Either the report was sloppily written or the analysis was specifically written so the reader only saw information that supported the desired conclusion. Issuing a challenge to a report with so many flaws indicates that NARCAP did not conduct a thorough review of what was present- ed. If NARCAP was trying to promote the case as proof of UAPs being something under intelligent control, they failed and, instead, appeared to expose their research as flawed.