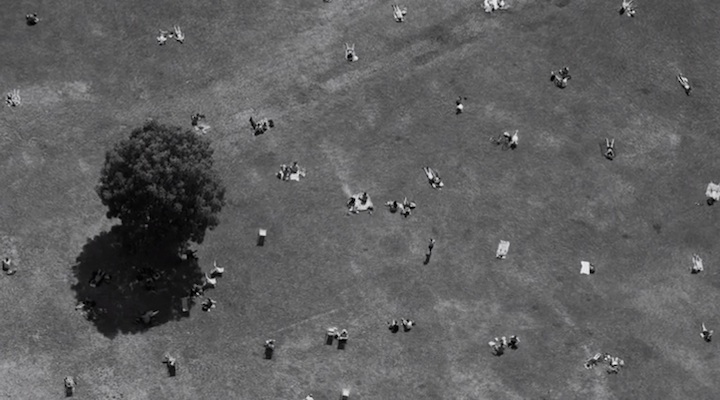 Sorry to break it to you, but Google Earth ain't all that.

In a pre-digital era more than 30 years before Google Earth, an ultrasecret US satellite program spied on other countries by taking much higher quality photos of the planet's surface.
The intelligence community called this program Big Bird and Keyhole-9, but its codename was Hexagon.
"These were much better pictures than Google Earth," Phil Pressel told CNN's "Declassified."
Pressel should know. He was a top engineer at Massachusetts-based Perkin-Elmer, designer and builder of Hexagon's cameras -- which played a huge role in protecting the United States during the Cold War.
"I honestly think that the Hexagon program was responsible for preventing World War III," Pressel said. Hexagon photos allowed US intelligence analysts to conclusively count numbers of Soviet troops, tanks, aircraft and missiles to make sure Moscow wasn't violating arms control treaties.
The Hexagon program is part of a legacy of American spies in the sky stretching from the 1950s to today, aimed at finding early warning signs about potential threats to the US.
Read the National Reconnaissance Office's declassified file on Hexagon
The US National Reconnaissance Office launched 20 Hexagons between 1971 and 1986. One reason their cameras captured so much detail was because they were big.
Each satellite was the size of a school bus and weighed 30,000 pounds. They created photos showing 370-mile swaths of the planet. From 100 miles in orbit, those pictures clearly showed objects as small as 2 feet wide (61 centimeters.) 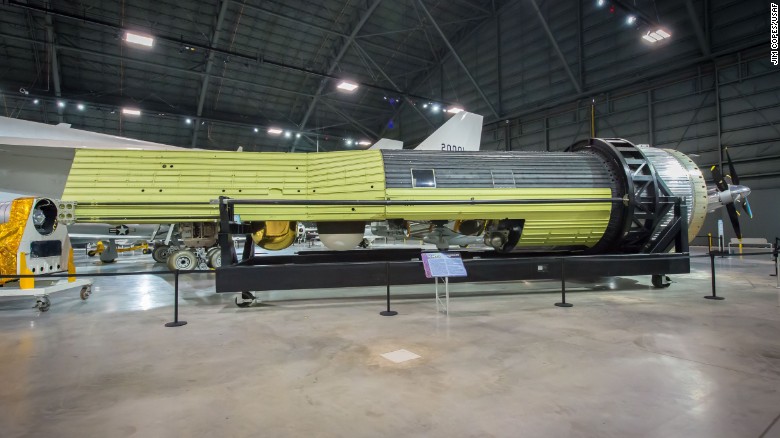 A Hexagon spy satellite at the National Museum of the US Air Force in Dayton, Ohio.
At that level of resolution, you could see a picnic blanket and count the number of people on it, said Pressel, "... you might see a ball being tossed." 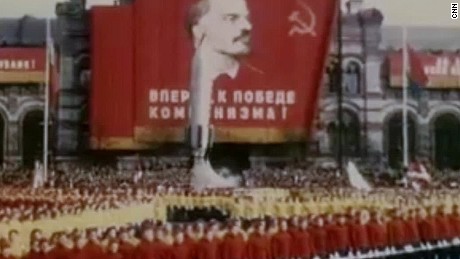 The satellites that engineers say prevented a US-Soviet war. 01:08
Although some of Google Earth's images shot from aircraft are very clear and show people on the ground like Hexagon's, that's not the case with Google Earth's color photos from satellites. Google wouldn't respond to CNN's questions asking for specific resolution figures for its satellite images, but at best, their color photos only show objects as small as about 3 feet wide, or about 1 meter, according to several satellite industry reports.
For security reasons, "U.S. companies are currently limited to selling imagery that has a ground resolution of 0.25 meters (9.8 inches) on the commercial market," said Brian Weeden, space surveillance expert and technical adviser at the Secure World Foundation.

What was really crazy about these satellites is how they delivered the goods.
After the film was shot, the satellites loaded the footage into capsules and dropped them from orbit into the atmosphere. These so-called "buckets" descended to an altitude of 50,000 feet -- where they popped their parachutes off the Hawaiian Islands.
Hexagon spy satellite

Source: National Museum of the USAF

While the buckets floated toward the ocean surface, they broadcast radio beacons that helped Air Force pilots flying C-130 cargo planes zero in on their locations. The planes then used a special system of cables to snag the buckets in midair.
In 1972, a bucket parachute failed to open and it crashed into the Pacific. Although the buckets were designed to float, this one sank, experts said, probably because it was damaged by the force of hitting the water.
The United States mounted a secret, dramatic and unprecedented deep-sea search and recovery mission to find the bucket, a story revealed in CNN's "Declassified."
After each satellite ran out of film, controllers intentionally let the Hexagons fall out of orbit back to Earth, where they burned up in the atmosphere during re-entry, like falling stars.

Film buffs may know that a lost canister from a US spy satellite inspired the plot of the 1968 Rock Hudson film, "Ice Station Zebra."
In 1959, the Air Force accidentally caused the satellite Discoverer II to send its re-entry vehicle down over the Arctic, said Dwayne Day, historian and space policy analyst.
The United States suspected the vehicle landed on Norway's Spitsbergen Island, prompting a search mission.
Supposedly, Day said, US searchers saw tracks in the snow that led back to a Soviet mining camp, which sparked suspicions that Moscow got its hands on that secret US re-entry vehicle.
Day said the Air Force officer responsible for the launch "kind of scoffed at the story. He told me, 'I find it really hard to believe that in all that big ocean the thing happened to come down on that one tiny piece of land.' He just thought it was all a lot of bunk," Day said.

Task a satellite with your smartphone

Fast forward to today, when just about anybody can get in on the satellite game.
Got a credit card and a smartphone? You can change a satellite's orbit and take photos of specific areas of Earth from space with a phone app called SpyMeSat.
But those are commercial satellites, owned and operated by companies. They may have the high-res capabilities of some imagery spy satellites, but they're not allowed to sell those images commercially. Access to the ultra-high resolution stuff captured by commercial satellites is limited to the US government.
Even without high-res photos, access to commercial satellites allow just about anyone to do cool things with the technology, like a project with DigitalGlobe to count Weddell seals in Antarctica.

So, what kind of space-surveillance gear is Uncle Sam packing these days?
There are "probably a handful" of secret US satellites today that take ultra-high resolution photos of the Earth from space, said Day. "Some have been up there many years -- five to 10 years."
These satellites are even better than Hexagon, Day said, with higher resolution and the ability to see at night -- using sensors that detect infrared electromagnetic radiation -- like heat coming off machines, buildings or people. 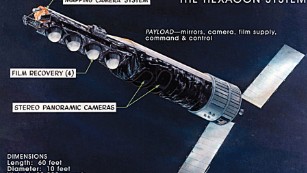 A National Reconnaissance Office diagram of Hexagon (Click to expand)
Although their dimensions are classified, we know these modern photo satellites are fairly large because of the size of the rockets that launch them into orbit.
The United States has more than 120 secret satellites in orbit, according to the Union of Concerned Scientists, which updates a list on its website.
Just like human spies, top secret satellites actually have cover names.
These names begin with the letters "USA" followed by a three-digit code. The most recent secret satellites, USA-270 and 271, were launched on August 19.
Today's spy photo satellites transmit images back to Earth electronically. That allows for somewhat smaller satellite designs because it eliminates the need to store film. Hexagon had to haul 60 miles of film -- 30 miles in two cameras -- and eight buckets to drop the film back to Earth.
First launched in 1976, a US spy satellite program called Kennen "was the first near-real time system," Day said. Images were beamed down minutes or hours after they were taken, he said, as opposed to waiting days or weeks for them to be dropped, like the Hexagons. Current US photo satellite systems are descendants of that technology, said Day.

There are other amazing ways that snooping governments can get a look at us.
Radar satellites bounce radio waves off objects on the ground, allowing analysts to precisely evaluate their shapes. These satellites can determine a building's dimensions down to the centimeter, day or night.
Multispectral and hyperspectral satellites monitor many kinds of electromagnetic waves on the planet's surface that are invisible to the human eye. With this technology, for example, analysts can determine what materials make up an object.

The US government remains the global leader in satellites that boast extreme surveillance capabilities -- so-called "exquisite" platforms, experts say.
"The US is second to none in terms of quality, quantity and diversity of different types of spy satellites. It has far more reconnaissance imagery satellites than anybody else and they're much better quality," said Weeden.
But other nations are rushing to catch up.
France and Israel "have some very good imagery and electronic intelligence and -- in the case of the Israelis -- radar imagery satellites, but they have only very few of them," said Weeden, who is technical adviser for the Secure World Foundation.
"Russia is pretty good," he said, "but they're definitely a step behind" the United States. "Same with China," said Weeden. "They've gotten much, much better just within the past 10 to 15 years."
China's 2013 space budget was estimated at $6 billion, outspending Moscow by about a billion dollars, according to Organisation for Economic Co-operation and Development. The US government's civilian and military space budgets together total around $44 billion a year,according to the US Government Accountability Office. Of that, Washington spends about $22 billion a year on military national security space programs, according to the Defense Department.
"China is making a concerted effort on space, across the board," Weeden said, "everything from human space flight to military intelligence, because they see space as being a key to power in the 21st century."
As more nations develop increasingly sophisticated spy satellites designed to gather the best intelligence data, the space surveillance arena will only become more competitive.
The whole scenario offers a reminder that -- now more than ever -- prying eyes are looking down on us 24/7.
Quelle: CNN
1876 Views
Created with page4