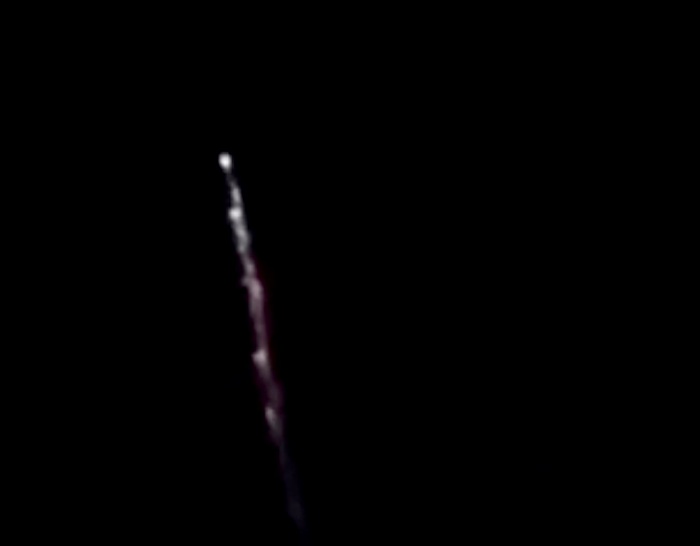 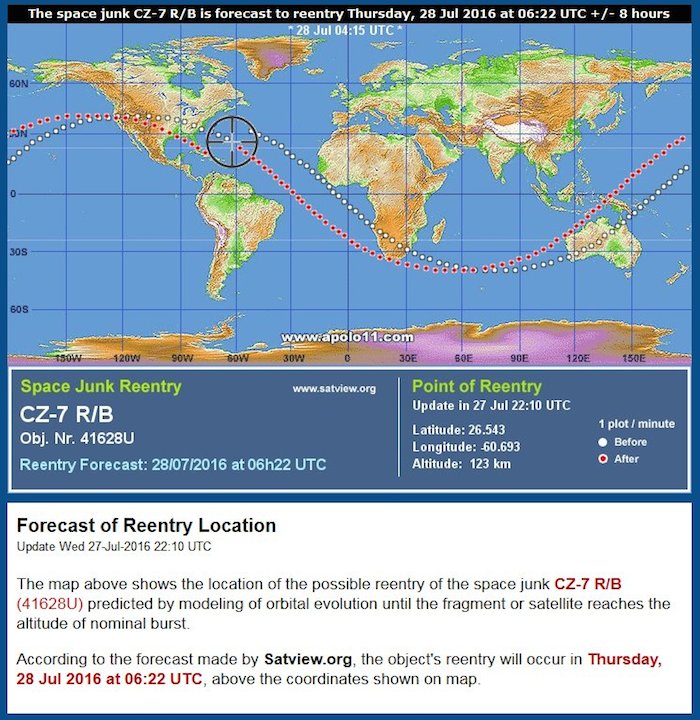 A flaming fragment of space junk from China’s newest satellite launcher blazed through Earth’s atmosphere over the Western United States late Wednesday.
Darting across the skies of California, Nevada, Utah, Idaho and Colorado, the object disintegrated into numerous chunks before disappearing. The relatively slow speed of the fireball — it took nearly a minute to cross the sky — ruled out a natural origin, experts said.
The video above was captured by Matt Holt in Utah County, Utah.
The source of the unexpected sky show around 9:40 p.m. PDT Wednesday (12:40 a.m. EDT; 0440 GMT Thursday) was the second stage from China’s Long March 7 rocket, which took off June 25 on its maiden test flight, according to Jonathan McDowell, a scientist at the Harvard-Smithsonian Center for Astrophysics who tracks global satellite and launch activity.
A notice issued a few hours later by the Joint Space Operations Center, the U.S. military unit responsible for monitoring space traffic, confirmed the Long March 7’s re-entry over the United States.
McDowell matched the time of the event with the Long March 7 rocket’s orbit, which carried the object from west to east over the Western United States. He said the second stage of the Long March 7 booster initially launched into an orbit ranging between 126 miles (203 kilometers) and 234 miles (378 kilometers) above Earth, but natural drag from the rarefied outer layers of Earth’s atmosphere pulled the uncontrolled rocket to an altitude of less than 90 miles (140 kilometers) by Wednesday.
The U.S. military’s space traffic trackers issued re-entry predictions for the Long March 7 rocket body before Wednesday night’s fall from orbit, but such events are impossible to predict with specificity. Re-entry forecasts usually predict an object will reach the atmosphere some time during multi-hour windows with geographic footprints spanning the globe.
While the exact dimensions for the Long March 7’s second stage have not been published by China’s government, McDowell estimates the rocket segment measures 36 feet (11 meters) long and 11 feet (3.35 meters) in diameter. After consuming its liquid oxygen and kerosene propellants during launch, the rocket fragment’s mass was likely around 13,000 pounds, or 6 metric tons, he told Spaceflight Now via email early Thursday.
That ranks among the largest objects to come back to Earth unguided over the last few years. Small debris rains down on Earth every day, vaporizing from the scorching temperatures of re-entry, but the re-entry of chunks space junk as large as the Long March 7 second stage are less common.
McDowell said the last time such a big piece of debris came down uncontrolled was in January, when a stage from a Ukrainian-built Zenit booster re-entered Earth’s atmosphere over Vietnam, littering the countryside with small bits of rocket components.
The Long March 7 stage’s size and mass were comparable to NASA’s Upper Atmospheric Research Satellite, a defunct Earth science observatory that crashed back into the atmosphere in 2011, generating widespread public attention despite a quantifiably low risk of causing injury or death to someone on the ground.
Most of the Long March 7 rocket that fell Wednesday night burned up in the atmosphere, but a few parts could have survived and landed intact.
. 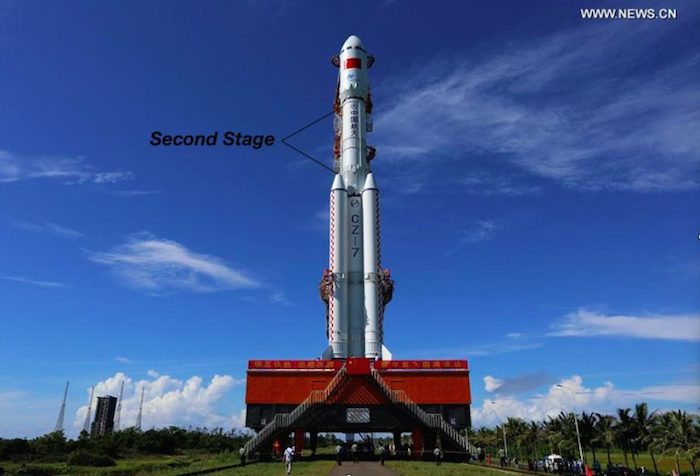 This image of the Long March 7 rocket was taken before launch. Credit: Xinhua
The Long March 7 rocket is the most powerful rocket ever launched by China. Its debut flight June 25 from a new spaceport on Hainan Island in the South China Sea deployed a payload of several small research satellites and a sub-scale unpiloted prototype capsule for a next-generation Chinese crew spaceship in the early stages of development.
The rocket’s second stage was abandoned in orbit.
Future Long March 7 missions will launch supplies to China’s planned space station, with test deliveries due to begin in 2017 to the Tiangong 2 space lab, a pathfinder to a larger research complex in the early 2020s. The Long March 7 will also be certified to launch astronauts in the future, Chinese officials said.
In development for eight years, the Long March 7 is one of several new rockets Chinese officials plan to replace the country’s existing launcher fleet.
The Long March 2, 3 and 4 series of rockets are based on technology originally developed in the 1970s and 1980s. They also burn a toxic mix of hydrazine and nitrogen tetroxide propellants, chemicals that are harmful to humans and the environment.
The Long March 7, together with the smaller Long March 6 and bigger Long March 5, burns kerosene and liquid oxygen, a more environmentally-friendly propellant combination.
Quelle: SN
-
Update: 29.07.2016
.

Maybe it was a meteor? Or space junk? People on the West Coast weren't sure what the bright object was that streaked across the sky Wednesday night, but they knew it was spectacular. Now comes word that the object — which separated into bright fragments — was a stage of China's large new rocket.
Americans who spotted the flaring object Wednesday night could be forgiven for not knowing that. "Oh my gosh!" was a common reaction, as in a video taken in Utah by Matt Holt.
The light show appeared in skies over the western U.S. around 9:30 p.m. PT, sparking a flood of reports to meteor-monitoring groups, a flurry of tweets and a number of striking videos. While first-person accounts on Meteorite News differed, some details were constant: The string of objects moved from west to east, with alternating colors and a bright trail.
We got in touch with Holt to ask him about his experience — and whether he, like others in his video, was worried by what he saw.
"I was not concerned at all; just in awe at the science of space," he says. Noting the reports that the object has since been identified as a large Chinese rocket booster re-entering Earth's atmosphere, Holt adds, "I think a world-ending light show would be, um, over a lot quicker."
"What the hell is it?" is how another video starts — one that, we warn you, also includes some profanity. Taken by Ian Norman in an open area in Alabama Hills, Calif., near the Sierra Nevada mountains, the video shows the object streaking across the sky and over the horizon, in a scene that lasts for well over a minute.
. 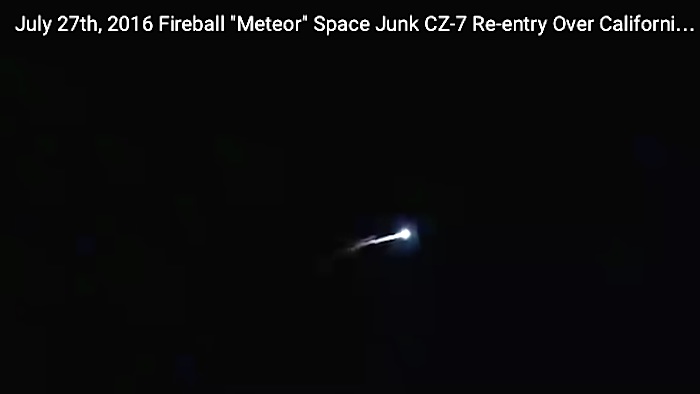 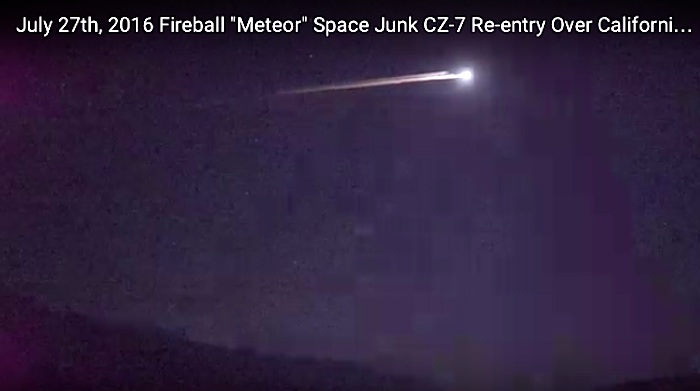 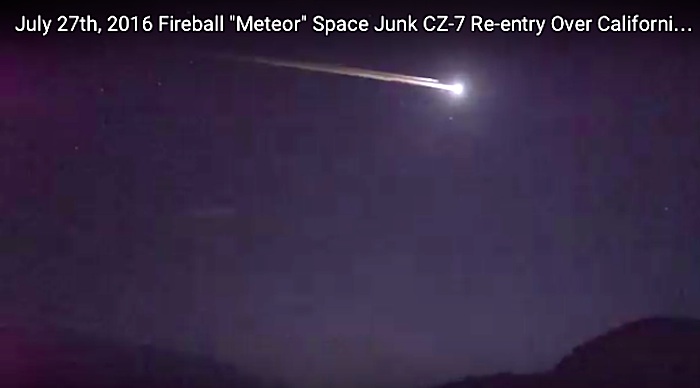 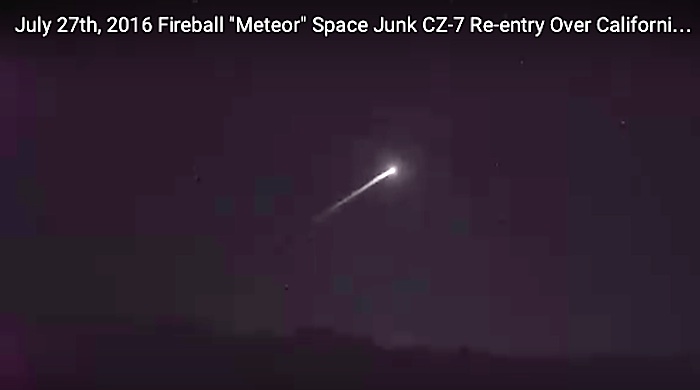 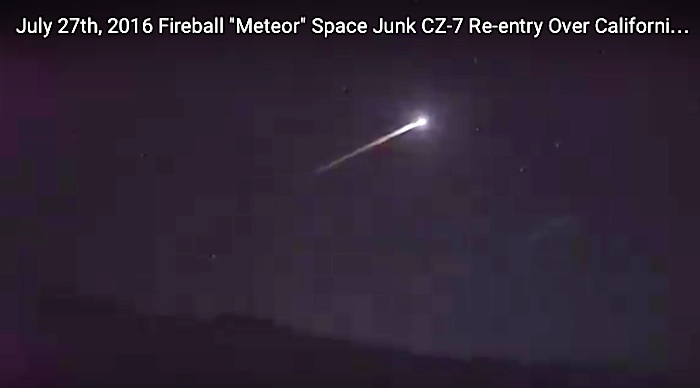 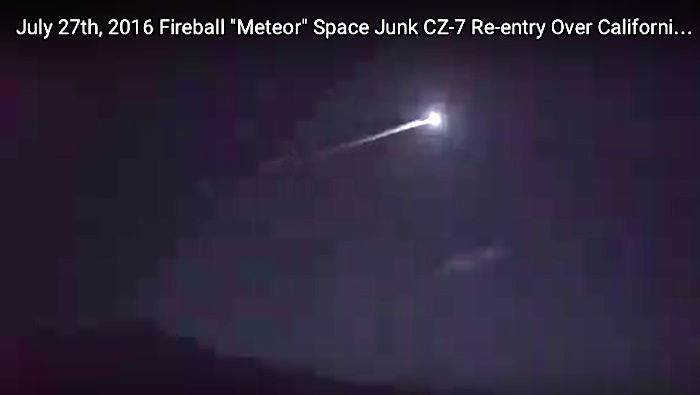 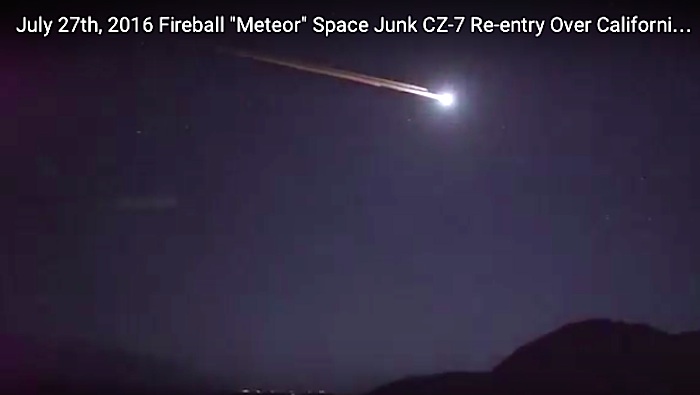 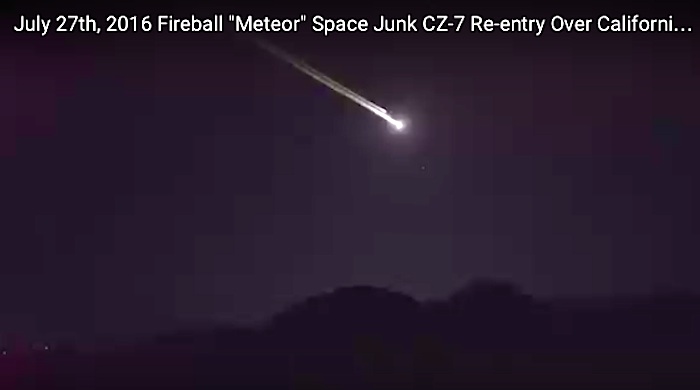 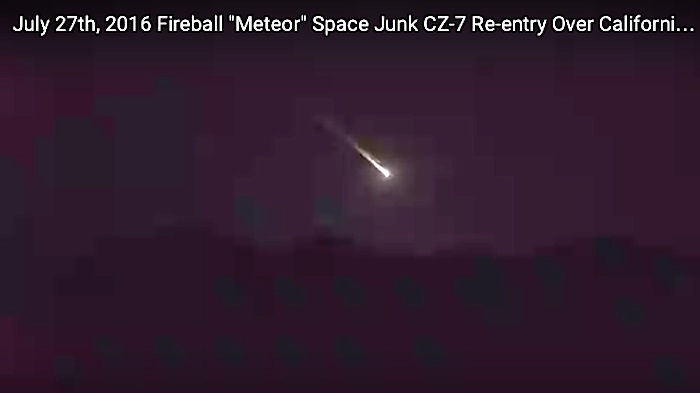 The object was the second stage of China's Chang Zheng 7 rocket that was launched on June 25, according to astronomer Jonathan McDowell of the Harvard-Smithsonian Center for Astrophysics, who cites confirmation from the Space-Track organization and the Joint Space Operations Center.
This was the first CZ-7 launched, McDowell says, adding that it's rare for objects of more than 5 tons to re-enter Earth's atmosphere.
A spokesman for U.S. Strategic Command confirmed the re-entry, saying that its Joint Space Operations Center, which tracks objects that orbit our planet, "removed a Chinese rocket body, a CZ-7 rocket body, from our U. S. satellite catalog as a 'decayed object' last evening."
As McDowell tells NPR's Nell Greenfieldboyce, "The only bigger event this year was a Russian rocket stage that re-entered over Vietnam on New Year's Day."
"It's pretty. You can immediately tell that it's probably space junk. It lasts longer, moves slower than a natural meteor or fireball, and it has this characteristic sort of shedding material," he says. "Because what's happening of course is that you're dropping a several ton hunk of aluminum into the atmosphere at 18,000 miles an hour and parts of it melt and then you get several separate chunks falling through the sky."
McDowell also tells Nell that while the risk of anyone being struck by objects falling to Earth's surface is very low, many engineers and designers make sure that a re-entry takes place over an ocean or another safe place.
Discussing China's space program, McDowell says, "It's a bit surprising that their new, fancy modernized launch system didn't include the ability to safely dispose of the upper stage."
At the Joint Space Operations Center, Air Force Capt. Nicholas Mercurio tells Nell that the rocket section was more than 30 feet long, and that it had been tracked for the past month. In 2015, Mercurio says, there were 110 re-entries of tracked objects — his agency keeps track of those objects that are 10 cm or larger.
People had time to stare at the fragmented object as it sparkled in the sky — reportedly as bright as the moon or any star — and also to record the scene, because it persisted for at least 20 seconds, and in some cases for much longer, according to observers who sent a record of their impressions to the American Meteor Society.
The society says it received 47 reports about the fragmented object, from as far north as Montague, Calif., as far east as Salt Lake City, and as far south as San Diego. Sightings were also reported in Las Vegas and in Big Bear, Calif.
One TV reporter who happened to snag footage of the spectacle had the same reaction, saying as the bright fragments trailed across the dark sky, "Holy... no way!"
.

That's the impression of Nicole Vowell of KSL 5 TV, who then added, "I don't know, that's pretty much the sweetest thing I've ever seen in my life." 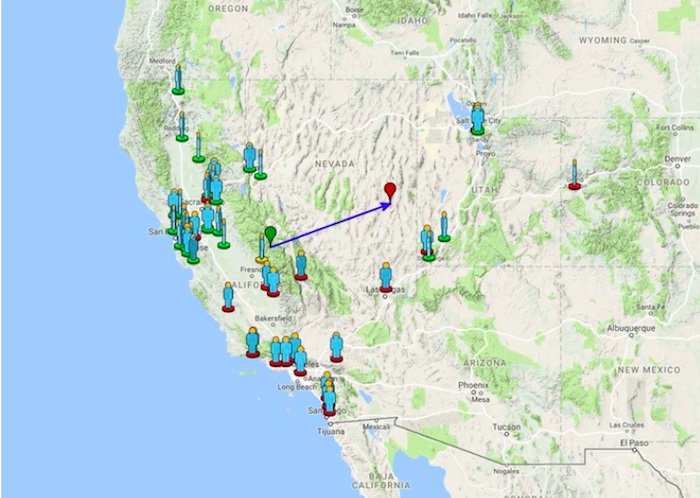