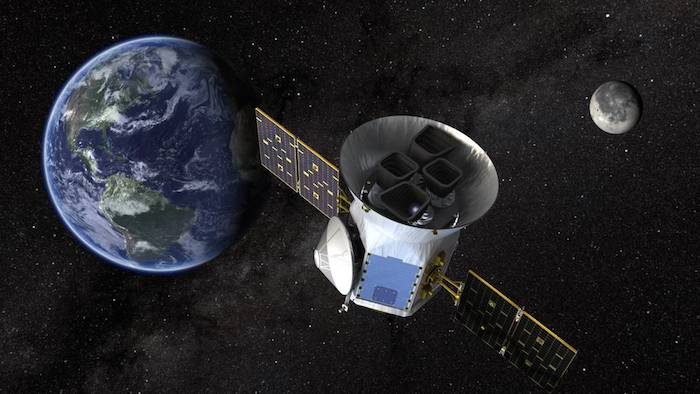 TESS will look at the nearest, brightest stars to find planetary candidates that scientists will observe for years to come.
Credits: NASA's Goddard Space Flight Center
-
As the search for life on distant planets heats up, NASA’s Transiting Exoplanet Survey Satellite (TESS) is bringing this hunt closer to home. Launching in 2017-2018, TESS will identify planets orbiting the brightest stars just outside our solar system using what’s known as the transit method.
When a planet passes in front of, or transits, its parent star, it blocks some of the star's light. TESS searches for these telltale dips in brightness, which can reveal the planet's presence and provide additional information about it.
TESS will be able to learn the sizes of the planets it sees and how long it takes them to complete an orbit. These two pieces of information are critical to understanding whether a planet is capable of supporting life. Nearly all other planet classifications will come from follow up observations, by both TESS team ground telescopes as well as ground- and space-based observations, including NASA's James Webb Space Telescope launching in 2018.
Compared to the Kepler mission, which has searched for exoplanets thousands to tens of thousands of light-years away from Earth towards the constellation Cygnus, TESS will search for exoplanets hundreds of light-years or less in all directions surrounding our solar system.
TESS will survey most of the sky by segmenting it into 26 different segments known as tiles. The spacecraft's powerful cameras will look continuously at each tile for just over 27 days, measuring visible light from the brightest targets every two minutes. TESS will look at stars classified as twelfth apparent magnitude and brighter, some of which are visible to the naked eye. The higher the apparent magnitude, the fainter the star. For comparison, most people can see stars as faint as sixth magnitude in a clear dark sky and the faintest star in the Big Dipper ranks as third magnitude.
Among the stars TESS will observe, small bright dwarf stars are ideal for planet identification, explained Joshua Pepper, co-chair of the TESS Target Selection Working Group. One of the TESS science goals is to find Earth- and super-Earth-sized planets. These are difficult to discover because of their small size compared to their host stars, but focusing TESS on smaller stars makes finding these small planets much easier. This is because the fraction of the host star's light that a planet blocks is proportional to the planet’s size.
Scientists expect TESS to observe at least 200,000 stars during the two years of its spaceflight mission, resulting in the discovery of thousands of new exoplanets.
While the search for transiting exoplanets is the primary goal of the mission, TESS will also make observations of other astrophysical objects through the Guest Investigator (GI) Program. Because TESS is conducting a near all-sky survey, it has the capability to perform interesting studies on many different types of astronomical target.
“The goal of the GI Program is to maximize the amount of science that comes out of TESS,” said Padi Boyd, director of the Guest Investigator Program Office at NASA’s Goddard Space Flight Center. "Although TESS was designed to be capable of detecting planets transiting in front of stars, its unique mission characteristics mean that the potential science TESS can do includes far more than just exoplanets.” According to Boyd, the broad range of objects TESS could detect as part of the GI Program include flaring young stars, binary pairs of stars, supernovae in nearby galaxies, and even supermassive black holes in distant active galaxies. “We hope the broader science community will come up with many unique science ideas for TESS, and we hope to encourage broad participation from the larger community,” she said.
With the potential to expand our knowledge of the universe for years to come, researchers are excited about the potential discoveries TESS could bring.
“The cool thing about TESS is that one of these days I’ll be able to go out in the country with my daughter and point to a star and say ‘there’s a planet around that one,’” said TESS Project Scientist Stephen Rinehart.
Quelle: NASA
Astronomie
« Zum vorherigen Eintrag Zum nächsten Eintrag »
2597 Views
Created with page4