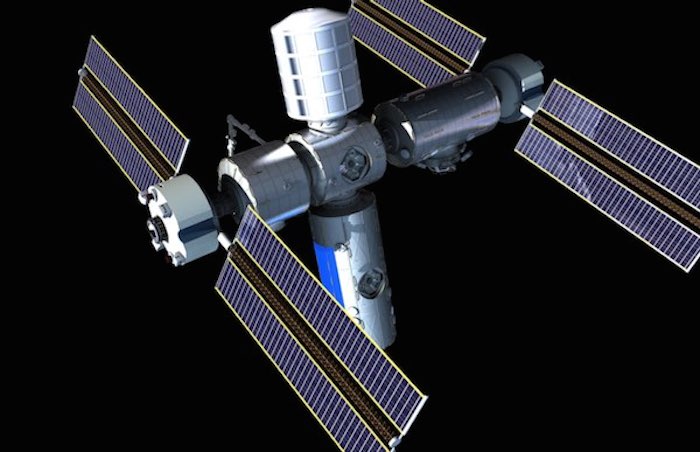 An illustration of a potential future commercial space station proposed by Axiom Space, based in part on a commercial module the company hopes to initially install on the ISS. (credit: Axiom Space)
-
In December, European ministers are expected to vote on a proposal to extend the European Space Agency’s participation in the International Space Station through 2024. If they decide to do so—and the leadership of ESA as well as some European national space agencies expect just that—ESA will be the last of the major ISS partners to agree to that extension, securing the station’s future for the next eight years.
“What we would like to do is fly a module that begins its life at the International Space Station,” Suffredini said of Axiom Space’s plans.
What happens to the ISS after 2024 remains uncertain. Barring any unforeseen technical problems, or an accident of some kind, the station could continue to operate beyond 2024, to 2028 or even later. Whether the ISS partners will want to continue spending billions of dollars a year to operate it past 2024, though, is less certain. NASA, for example, expects to wrap up the research it needs to conduct there to support its long-term human Mars exploration efforts by the mid-2020s, largely ending its need for a government-operated space station.
What NASA expects—or, perhaps more accurately, is hoping for—is that the private sector takes over, developing one or more commercial space stations that could serve as platforms for research, tourism, or other applications, and be facilities that NASA could lease space on to support any additional research it wanted to conduct in low Earth orbit post-ISS. But how NASA gets from the ISS of today to an independent commercial station in the mid-2020s is unclear. Increasingly, both NASA and private industry believe there needs to be an intermediate step, in the form of a commercial module on the ISS itself.
Axiom versus Bigelow
One company with commercial space station ambitions has already talked about adding a module to the ISS. In April, Bigelow Aerospace unveiled its proposal to attach one of its B330 modules to the station as soon as 2020. The Expandable Bigelow Advanced Station Enhancement, or XBASE, would be available for both NASA and commercial users on a timesharing basis, Bigelow Aerospace’s president, Roberg Bigelow, said at the time (see “Expanding the space station market”, The Space Review, April 18, 2016). He said that his company has had “several discussions” with NASA about the XBASE concept.
But Bigelow Aerospace is not alone in showing an interest in both commercial space stations and commercial modules on the ISS. At the NewSpace 2016 conference in Seattle in June, Michael Suffredini, the former NASA manager of ISS and the current president of the commercial space division of Stinger Ghaffarian Technologies (SGT), unveiled his own plans. Suffredini said that he was working on a new venture, called Axiom Space, that also planned to develop a commercial ISS module.
“What we would like to do is fly a module that begins its life at the International Space Station,” Suffredini said in an interview after his conference. “That will help us transition from research and manufacturing and everything else done on ISS on a future platform.”
When attached to the station, it would be available for use by NASA and as well as companies. One the ISS reaches the end of its life, he said, the module could be detached and used as the core of an independent, commercial space station that is part of Axiom Space’s long-term plans.
Axiom Space, co-founded by Suffredini and SGT chief executive Kam Ghaffarian, is still in its earliest phases. Suffredini said the company has raised a seed round of funding and is talking with investors now about raising a larger round of funding this fall. He added the company is also is discussions with companies to build that module, and hopes to select a company to build it by early next year, shortly after the module completes a preliminary design review.
Suffredini, though, appeared to rule out working with Bigelow Aerospace and its expandable, or inflatable, module technology. “In order to make money, we have to get to orbit fast,” he said, citing a goal of having the module on the ISS by 2020 or 2021. “I think it’s going to take a while to build a spacecraft out of inflatable technology.”
“We essentially have one of the ports on the space station that we’re going to make available to the private sector to go utilize how they want,” Gerstenmaier said.
That could put Axiom and Bigelow into competition with each other, since the ISS, in its current configuration, appears unable to support two such modules. “Ports are a precious resource,” Suffredini said, referring to docking ports on the ISS. “NASA has to figure out how to deal with that.”
. 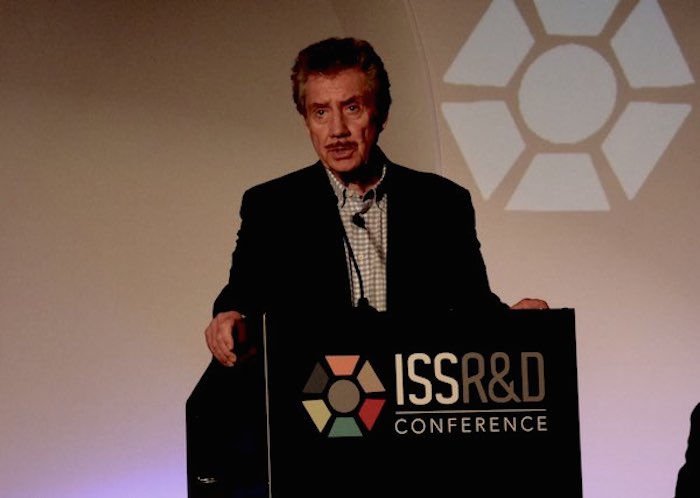 Robert Bigelow said during the ISS Research and Development Conference in San Diego that he has submitted a proposal to NASA to attach a B330 module to the ISS. (credit: J. Foust)
-
NASA seeks advice
NASA appears to be starting to do just that. On July 1, the agency issued a request for information (RFI) titled “Advancing Economic Development in Low Earth Orbit (LEO) via Commercial Use of Limited Availability, Unique International Space Station Capabilities.” The agency is seeking input for industry on how to use “limited availability” resources on the station to support commercial ventures.
Among the specific capabilities included in the RFI is the aft port on the Node 3, or Tranquility, module on the station. That port is currently in use by the Bigelow Expandable Activity Module (BEAM), the prototype of a future expandable module developed by Bigelow Aerospace under a NASA contract. The module, flown to the station on a cargo resupply in April, expanded to its full size in late May and is expected to remain there for two years.
Bill Gerstenmaier, NASA associate administrator for human exploration and operations, told the space subcommittee of the Senate Commerce Committee during a July 13 NASA hearing that the agency would effectively provide one docking port—presumably the one currently occupied by BEAM and mentioned in the RFI—for a commercial module at some point in the future.
“We essentially have one of the ports on the space station that we’re going to make available to the private sector to go utilize how they want,” he said. NASA would provide power and life support for that module in addition to the docking port itself, he added. The company using the port, though, would be responsible for contracting for commercial cargo and crew services to support the module.
Gerstenmaier also suggested, as both Bigelow and Suffredini have previously said, that the module could serve as a core of a future commercial space station once the ISS reaches the end of its life. “And then at some point, when the station’s life is exceeded, they could undock from the station and be the basis for the next private sector station,” he said at the hearing.
Gerstenmaier didn’t indicate what schedule NASA had for selecting a company to use that port for a commercial module. Those plans will depend on what responses the company gets to the RFI. The deadline for responses is July 29, although Gerstenmaier told a meeting of the NASA Advisory Council’s (NAC’s) human exploration and operations committee July 25 that the deadline could be extended “a little bit.”
“This is an unbelievable opportunity for folks to give us input,” he said at the committee meeting, “and then we’ll figure out, based on their input, what our next steps are.”
The companies most likely to respond to the RFI, of course, are Axiom Space and Bigelow Aerospace. Suffredini, asked about the RFI after speaking at the ISS Research and Development Conference in San Diego July 14, confirmed that his company planned to respond to the RFI. Bigelow, asked at the same conference about the RFI, said he wasn’t sure if his company would respond, but added that the company had already submitted a proposal to NASA regarding its XBASE concept.
Bigelow, in the panel session at the ISS conference devoted to post-ISS commercial platforms, didn’t mention XBASE specifically. However, he did discuss the role he sees the ISS playing in helping support the development of later commercial space stations, as his company has long talked about developing. “Starting with the purpose going forward for the ISS, I couldn’t think of a better metaphor than as an incubator,” he said.
Suffredini, also on the panel, said that while his company’s long-term goal is to build a “space city” (including showing an illustration of a notional design of a wheel-shaped rotating station that he suggested could be developed by the 2040s), the market for commercial space stations isn’t mature enough yet to warrant their development.
“Starting with the purpose going forward for the ISS, I couldn’t think of a better metaphor than as an incubator,” Bigelow said.
“We’ve made great strides, but we have a long way to go to be at the point where we can pay our own way,” he said of ISS utilization. “Today, where we are is not enough for investors to separate themselves from the hundreds of millions of dollars it takes to get started.” He called on conference attendees to help find new users for both the ISS and future commercial facilities.
A commercial module on the ISS, he said, could help bridge the gap between the station’s current use and the demand needed to close the business case for an independent commercial space station. “How do we get from where we are today to a point where ISS can retire?” he asked.
He said that, as long as ISS is in operation, it will attract users that could instead use a commercial station, complicating the business case. But, he added, retiring the ISS too soon also creates problems. “If ISS goes away, and commercial hasn’t established itself, we won’t have this opportunity.”
Those plans by Axiom and Bigelow will depend in large part on how NASA moves ahead with plans for giving one of them access to that desired docking port on the station. “This is probably one of the most important RFIs we’ve put out in a long time,” Gerstenmaier said at the NAC meeting. “This will really set the future of what we’re going to try and do as we think of operations beyond the space station.”
Quelle: SN
Raumfahrt
« Zum vorherigen Eintrag Zum nächsten Eintrag »
2118 Views
Created with page4