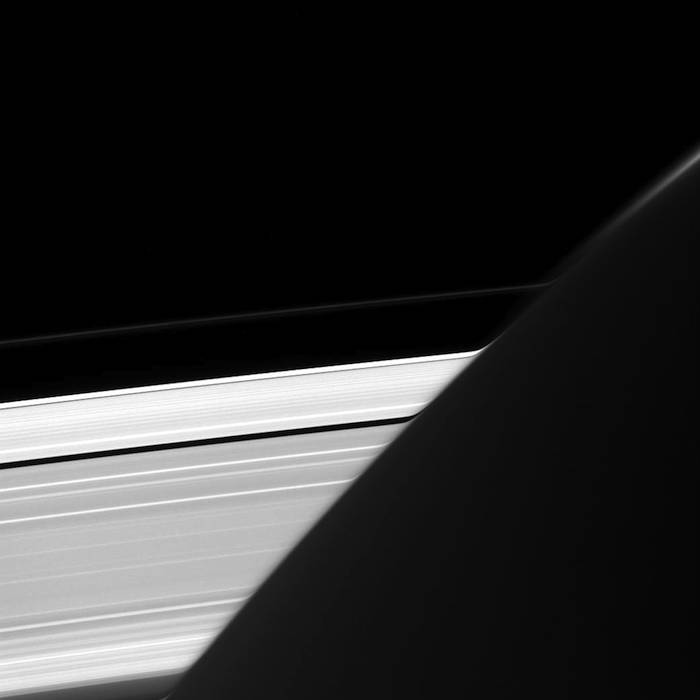 Saturn's A and F rings appear bizarrely warped where they intersect the planet's limb, whose atmosphere acts here like a very big lens.
In its upper regions, Saturn’s atmosphere absorbs some of the light reflected by the rings as it passes through. But absorption is not the only thing that happens to that light. As it passes from space to the atmosphere and back out into space towards Cassini’s cameras, its path is refracted, or bent. The result is that the ring's image appears warped.
This view looks toward the sunlit side of the rings from about 18 degrees above the ring plane. The image was taken in visible light with the Cassini spacecraft narrow-angle camera on June 9, 2016.
The view was acquired at a distance of approximately 1.1 million miles (1.8 million kilometers) from the rings and at a Sun-rings-spacecraft, or phase, angle of 112 degrees. Image scale is 7 miles (11 kilometers) per pixel.
The Cassini mission is a cooperative project of NASA, ESA (the European Space Agency) and the Italian Space Agency. The Jet Propulsion Laboratory, a division of the California Institute of Technology in Pasadena, manages the mission for NASA's Science Mission Directorate, Washington. The Cassini orbiter and its two onboard cameras were designed, developed and assembled at JPL. The imaging operations center is based at the Space Science Institute in Boulder, Colorado.
Quelle: NASA
Astronomie
« Zum vorherigen Eintrag Zum nächsten Eintrag »
2148 Views
Created with page4