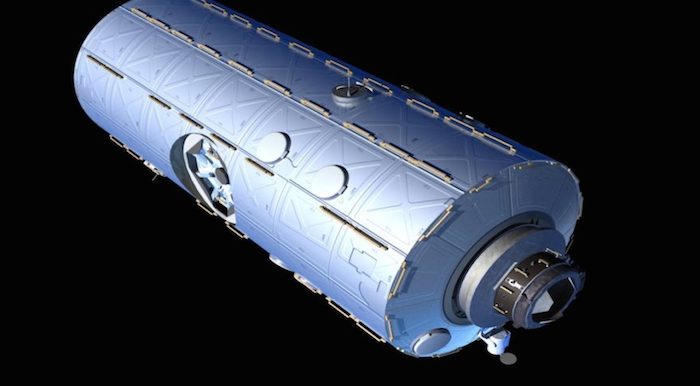 Michael Suffredini of Axiom Space showed July 14 this concept of a commercial module his company is considering for use on the International Space Station that could later serve as part of a standalone commercial space station. Credit: Axiom Space
-
SAN DIEGO — As two companies move forward with plans to develop commercial modules for use on the International Space Station as precursors to independent space stations, NASA is soliciting concepts for use of a space station docking port.
NASA issued a request for information (RFI) July 1 about how “limited availability, unique International Space Station capabilities” could be used to support economic development in low Earth orbit. “This RFI is being used to determine private market interest in using unique ISS capabilities that have limited availability in order to advance economic development in LEO,” the document states.
That request specifically mentions future use of the aft docking port on the Node 3, or Tranquility, module. That port is currently occupied by the Bigelow Expandable Activity Module (BEAM), installed on the station earlier this year for a two-year test. It would thus be available for use by other modules as soon as 2018, when the BEAM is removed from the station.
Bill Gerstenmaier, NASA associate administrator for human exploration and operations, mentioned the RFI at a July 13 hearing of the Senate Commerce Committee’s space subcommittee, saying NASA was seeking input for how industry could use the port and how the agency could work with companies to gain access to it.
“We essentially have one of the ports on the space station that we’re going to make available to the private sector to go utilize how they want,” he said. NASA would provide power and life support for that module in addition to the docking port itself, he said, while the company using the port would purchase cargo and crew transportation services from the private companies that provide similar services for NASA.
“We asked them for ideas of how they would use this port,” Gerstenmaier said of the RFI. “It will be exciting to see what the private sector tells us in this response. How can they use this unique asset?”
Gerstenmaier suggested that a company might seek to install their own module at that port as a precursor for an independent station once the ISS is retired. “And then at some point, when the station’s life is exceeded, they could undock from the station and be the basis for the next private sector station,” he said.
At least two companies have expressed an interest in placing a private module on the ISS as a precursor to a full-fledged commercial space station. In April, Bigelow Aerospace announced it was in discussions with NASA about installing one of its B330 modules on the ISS as soon as 2020.
Robert Bigelow, president of Bigelow Aerospace, did not specifically mention that proposal during a panel session at the International Space Station Research and Development Conference here July 14. He did state that the company was on schedule to have two B330 modules ready for launch by 2020. “Things are looking very good so far,” he said.
Bigelow said after the panel session that Bigelow was still in discussions with NASA about installing a B330 on the station. “We have made a formal proposal to do that,” he said. “We would be really excited to do that with NASA, and we gave them a tremendous deal.” He said, though, that he was not certain if Bigelow Aerospace planned to respond to the NASA RFI.
In June, Michael Suffredini, the former NASA ISS program manager who is now president of the commercial space division of Stinger Ghaffarian Technologies (SGT), announced the formation of a new venture, Axiom Space, to develop commercial space station modules. An initial module could be installed on the station as a precursor to a standalone station.
Speaking on the same panel as Bigelow, Suffredini showed an illustration of one concept for company’s proposed first module. That module, he said, would be sized to be as large as possible while still able to fit within existing launch vehicles and their payload fairings so it can go to the ISS on a single launch.
That module would be undocked at the end of the ISS’ life to form the core of a commercial space station, he said. “In our vision, the idea is that you have to build a station that can evolve as the market grows,” he said, confirming after his talk that his company planned to submit a response to the NASA RFI.
That evolutionary approach is essential, he said, since he believed that while long-term projections for market demand were promising, there wasn’t enough business now for a standalone commercial station. “Near term, however, we still have a long way to go.”
Quelle: SN
Raumfahrt
« Zum vorherigen Eintrag Zum nächsten Eintrag »
2065 Views
Created with page4