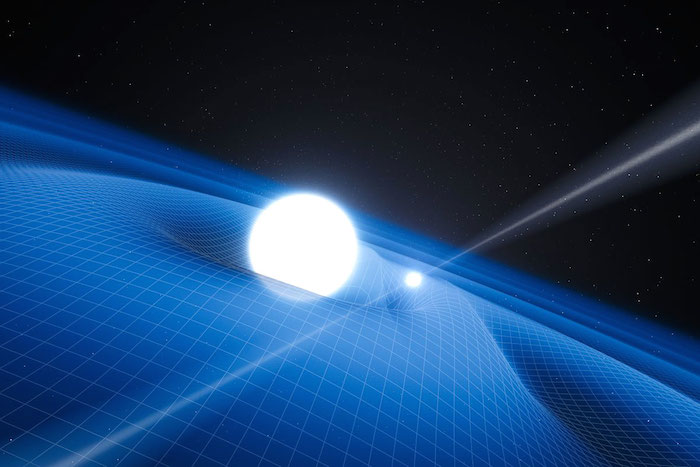 Objects that closely orbit pulsars may distort their radio signals
NASA/Caltech
-
Two strange celestial bodies might have the clingiest friends in the cosmos. If the spinning neutron stars B1859+07 and B0919+06 are orbited by very dense objects once every few minutes – closer than any known pair in the universe – it could explain a strange repeating pattern distorting their radio signals.
Pulsars, the dense, spinning corpses of stars that have died in a supernova, normally emit radio pulses like clockwork – though sometimes their pace can shift. But in the 1990s, Joanna Rankin at the University of Vermont in Burlington noticed another pattern she calls a “swoosh”: pulses from an object called B0919+06 started to arrive sooner than expected, and then, minutes later, the signal drifted back to normal.
Rankin says she initially thought it was an instrumental effect that originated inside the telescope. But when another pulsar started to show swooshes, she became curious about what caused the gradual shift and documented the phenomenon in a paper.
Now, a study led by Rankin’s student Haley Wahl offers the team’s best guess, after further observations that show swooshes sometimes repeat. Without an alternative explanation, Wahl thinks the periodic pattern could result from companion objects orbiting the pulsars at close range.
No ordinary object
These unseen neighbours, if they exist, would orbit the pulsars at the breakneck pace of once every few minutes – a shorter orbital period than any known pair of objects in the universe, says Rankin. By passing through the pulsar’s magnetic field at a sizeable fraction of the speed of light, these companions could be creating the swoosh pattern by disrupting the radio signal we see.
The companion must be something special, because most ordinary objects would be ripped to shreds by the pulsar’s gravity. “It has to be something incredibly dense to stay together,” says Rankin. “Even a rock of normal material couldn’t do anything but turn into dust.”
A small black hole could work, she says. But the most likely candidate would be a hunk of white dwarf matter, given that white dwarfs are already known to orbit neutron stars with periods as short as a few hours. The system could be at a later stage of its evolution, in which a white dwarf-neutron star pair is circling towards an inevitable collision with the pulsar.
The theory is still preliminary, Rankin says: “The whole idea of satellites this close to a pulsar is sufficiently wild that we say it’s the last resort.”
Still, pulsars with fragments of white dwarf around them should be out there, says Maura McLaughlin at West Virginia University in Morgantown. The trouble is that the proposed companions are small and faint, and thus hard to see. “It’s extremely hard to prove that a companion like that exists,” says McLaughlin.
Rankin’s team hopes that this paper will inspire others to work out a more complete physical model for the swooshes, allowing them to then ask for telescope time to check out these pulsars in more detail.
Quelle: NewScientist
Astronomie
« Zum vorherigen Eintrag Zum nächsten Eintrag »
2174 Views
Created with page4