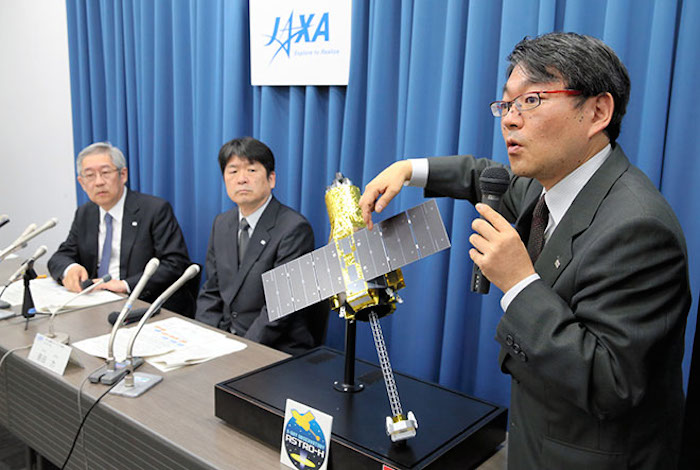 Takashi Kubota, right, director of the space and astronautical science program at the Institute of Space and Astronautical Science of the Japan Aerospace Exploration Agency (JAXA), responds to a question in a news conference in Tokyo’s Chiyoda Ward while using a model of the X-ray astronomy satellite Hitomi. (Wataru Sekita)
-
The Japan Aerospace Exploration Agency (JAXA) urged the science and technology ministry July 14 to develop a successor to the failed X-ray astronomy satellite Hitomi following JAXA’s abandonment of its mission.
At a task force of the science and technology ministry’s Space Development and Utilization Division the same day, JAXA explained that Hitomi could have achieved a lot had it continued its X-ray observations of cosmic phenomenon.
JAXA said that it could have gained multiple scientific outputs given the results of the observations taken for about two months from the time between Hitomi’s launch in February and the operation’s termination in April.
“We will apply what we have learned to the successor satellite to Hitomi to ensure that similar accidents will never happen again,” said Saku Tsuneta, vice president of JAXA and director of JAXA’s Institute of Space and Astronautical Science.
Launched Feb. 17, Hitomi’s first month in space went without a hitch, until it lost contact with ground control at around 4:40 p.m. on March 26.
It was later confirmed that Hitomi had begun to spin uncontrollably, ultimately breaking up into a number of pieces. After several failed attempts to revive the satellite, JAXA gave up and announced that it would end operation of the short-lived Hitomi on April 28.
JAXA will aim to launch a replacement X-ray astronomy satellite in 2020 after improving its programming for positional control, which caused the trouble.
The science and technology ministry will examine the options for developing a successor X-ray astronomy satellite to Hitomi in the days ahead.
Hitomi was a massive joint project involving 61 organizations from eight nations, including the United States and European countries. Japan alone had earmarked 31 billion yen ($295 million) for the project.
“Hitomi was the only international observing system. We would like the science and technology ministry to make the development happen while considering other projects on the table,” said Tsuneta.
Quelle: The Asahi Shimbun
.

The nation’s space agency said Thursday it is considering launching in 2020 an X-ray astronomy satellite to succeed Hitomi, which the agency lost communication with in March soon after it entered orbit.
The Japan Aerospace Exploration Agency said at a science ministry panel that it is studying improving the communication system software used in Hitomi.
That satellite — jointly developed by JAXA, the U.S. National Aeronautics and Space Administration, and other concerns — was equipped with four X-ray telescopes and two gamma-ray detectors, which scientists hoped would shed light on the mysteries surrounding the evolution of the universe and of black holes.
Hitomi was launched Feb. 17 from the Tanegashima Space Center in Kagoshima Prefecture, but JAXA completely lost contact with the satellite on March 29 after experiencing trouble communicating with it.
JAXA said the new satellite may be launched by an H-IIA rocket. It did not say how much such a new project would cost.
Currently, there is no similar planned observatory project until the European Space Agency launches its next-generation satellite sometime after 2028.
JAXA’s vice president, Saku Tsuneta, said the agency should try to shorten “the blank period” as much as possible.
JAXA also said it plans to launch an advanced unmanned cargo ship to the International Space Station in fiscal 2021. The carrying capability of the improved Konotori cargo transporter will be 45 percent greater than the current model.
Quelle: The Japan Times
Raumfahrt
« Zum vorherigen Eintrag Zum nächsten Eintrag »
2457 Views
Created with page4