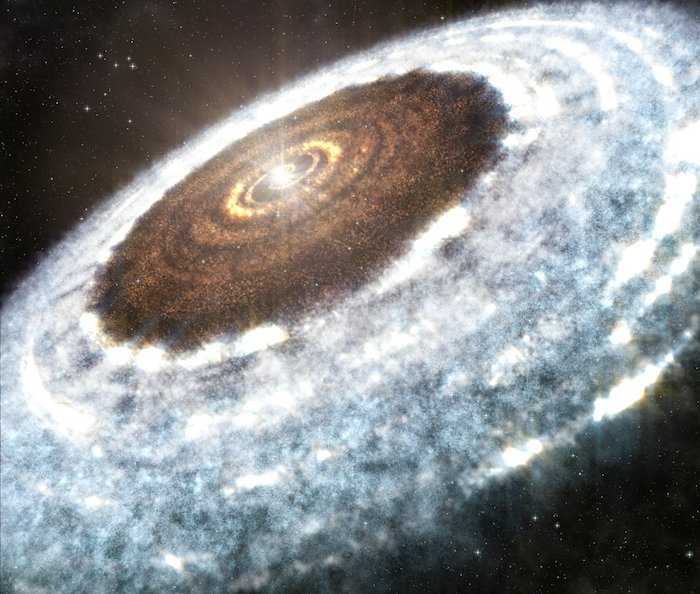 An artist's illustration shows the water snow line spotted around the young star V883 Orionis — the delineation between where the hot star vaporizes all water, leaving rocky dust and debris, and where ice and snow exist in the disk.

For the first time, astronomers have caught a glimpse of the water snow line around a star — the point in the young star's orbiting disk of debris where snow and ice first appear.
Normally, that boundary huddles too close to the star for astronomers to see it, but this particular star had a sudden burst of brightness that superheated its disk, obliterating ice further out than usual.
Researchers are excited to spot their first stellar snow line because of the vital part it plays in the formation of planets around young stars: The rocky section forms planets like Earth and Mars, while the snowy outskirts sprout gaseous worlds like Jupiter and Saturn.
-
Bright burst
A newborn star is surrounded by an orbiting pancake of gas, dust and debris — the raw materials from which its complement of alien planets will eventually form. Most stars are hot enough to evaporate the water in that disk up to about 280 million miles (450 million kilometers) from the center, which is three times the distance from Earth to the sun, allowing ice to coat the debris beyond. (The water skips its liquid phase because of the extremely low pressure in space.)
The star V883 Orionis, found 1,350 light-years from Earth in the constellation Orion, burns quite a bit hotter than usual — it is in the midst of a burst of brightness and heat from a sudden influx of new material. That let the star vaporize ice all the way out to 3.7 billion miles (6 billion km), or the average distance at which Pluto orbits the sun, catching researchers by surprise. The far-out boundary let them see the water snow line in radio wavelengths with the Atacama Large Millimeter/submillimeter Array (ALMA), a collection of radio telescopes in Chile that makes up the world's biggest ground-based observatory.
"The ALMA observations came as a surprise to us," Lucas Cieza, an astronomer at Diego Portales University in Chile and the lead author of the new work, said in a statement. "Our observations were designed to image disk fragmentation, which is one of the proposed mechanisms for the formation of giant planets." The researchers didn't see any fragmentation; instead they saw an unexpected ring in the disk.
. 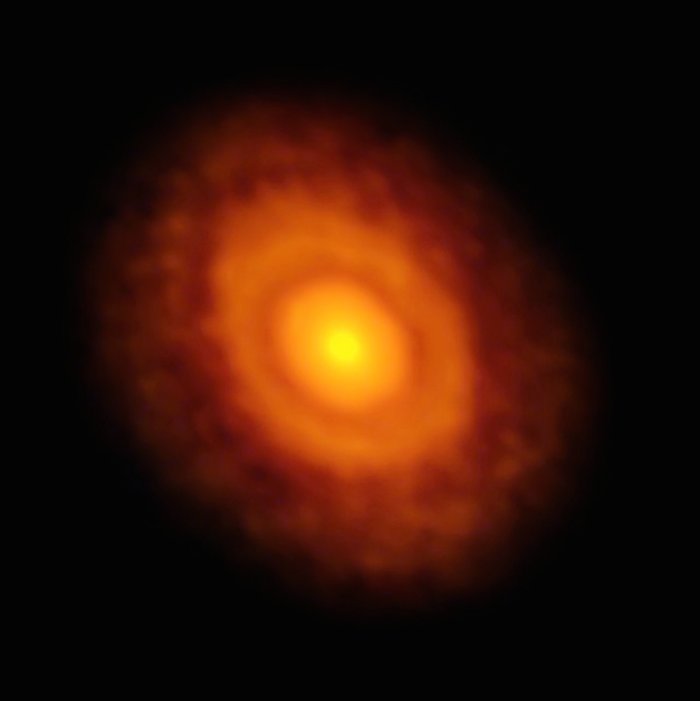 ALMA's radio image of the star V883 Orionis and its disk of gas, dust and debris — a precursor of planet formation. The water snow line is visible as a ring around the disk — the first dark ring after the central brightness of the star — at about the average distance Pluto lies from the sun.
Credit: ALMA (ESO/NAOJ/NRAO)/L. Cieza
-
Planet builders
In a News & Views column tied to the new work, which was published in the journal Nature today (July 13), Brenda Matthews, an astronomer at the National Research Council of Canada who was not involved in the study, wrote that the water snow line is important in determining which planets form — rocky planets form within it, and gaseous planets form out past it.
"The fact that the location of the snow line can evolve with time has strong implications for planet formation," Matthews wrote. The rapid loss and gain of ice tied to changes in the star "would confound models that predict the slow formation of rocky planets within the snow line, and rapid gas-giant formation outside it."
. 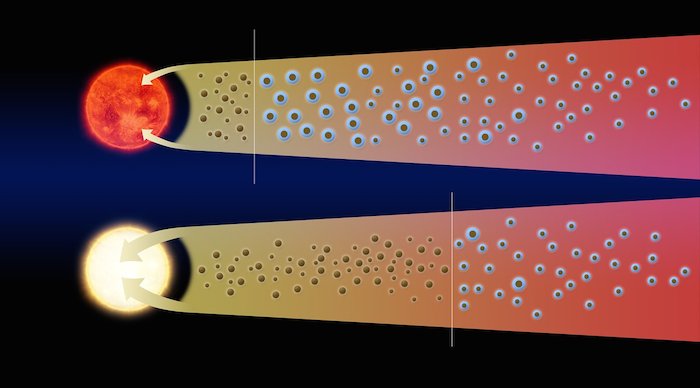 When the star V883 Orionis suddenly heated up due to an influx of new material, the water snow line moved much farther out, meaning researchers could detect it with ALMA.
Credit: ALMA (ESO/NAOJ/NRAO)/L. Cieza
-
And simply seeing a snow line at all, which had been postulated but not spotted before, helps confirm that other stars have a similar swath of ice and snow to the one in the sun's early environment that led to our solar system's current collection of planets.
"The distribution of water ice around a young star is fundamental to planet formation and even the development of life on Earth," Zhaohuan Zhu, an astronomer at Princeton University and a co-author on the new work, said in the statement. "ALMA's observation sheds important light on how and where this happens in protoplanetary disks when young planets are still forming."
"We now have direct evidence that a frosty region conducive to planet formation exists around other stars," Zhu added.
Quelle: SC
Astronomie
« Zum vorherigen Eintrag Zum nächsten Eintrag »
2039 Views
Created with page4