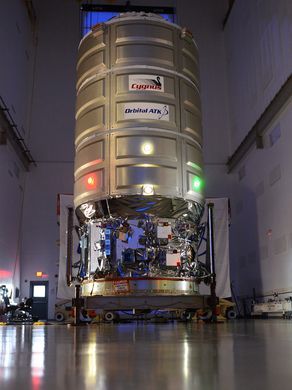 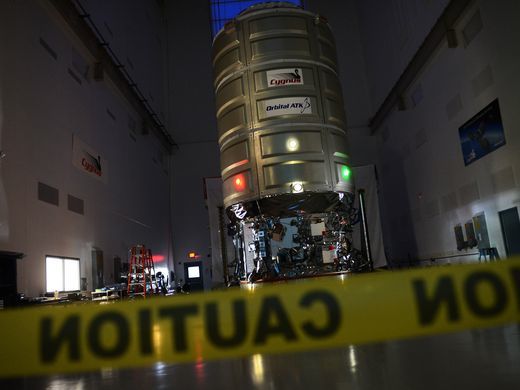 Inside a giant warehouse at NASA's Wallops Flight Facility, engineers and VIPs posed for pictures Tuesday in front of what looked like a 20-foot-tall can of soup.
Another day, another milestone in Orbital ATK's march toward its return to flight at the facility: the mechanical marriage of the two hulking modules that comprise the Cygnus spacecraft.
NASA and its private contractor are targeting a launch date some time in July, they announced Tuesday at a press gathering at the facility.
Engineers are preparing the rocket to send supplies and experiments to the International Space Station. A successful launch also will send a message that Wallops remains a viable spaceport, said Dan Tani, a senior director with Orbital and former astronaut.
"We're back here to what we consider our home port after a hiatus," he said. "We're on a path to a successful launch."
That launch will be the first for Orbital at Wallops since its unmanned rocket blew up spectacularly within seconds of takeoff in October 2014. The pad had to undergo $15 million in repairs, which were completed last fall.
Orbital, which is one of two aerospace companies under contract to ferry cargo to the space station, has flown two missions out of Cape Canaveral in Florida in the meantime.  it has overhauled its Antares rocket, replacing Soviet-era motors with newly built, more powerful Russian versions.
CONTEXT: Getting Antares back on track after its fiery mishap at Wallops.
Orbital tested the new rockets on the pad May 31, and initial results suggest all went according to plan, Tani said.
The main subject of Tuesday's showcase was the container that rests atop all that firepower: the Cygnus spacecraft. As of last week, the pressurized cargo module is bolted to the lower service module, the cylinder of circuitry that connects the cargo portion to the Stage 2 of the rocket.
Conditions inside the payload processing facility are similar to an operating room. All who enter must don disposable lab coats, hairnets and shoe covers. And don't even think about wearing cologne or perfume.
"We want to send into space the most pristine, the most clean things we can," Tani said.
As the launch approaches, workers will load the space vehicle into a tall container, which will be ferried by truck over the Wallops Island. There, it will join Antares, which is already waiting for its partner in a warehouse, Tani said.
Orbital officials also announced that the craft will be named the S.S. Alan G. Poindexter in honor of the former astronaut. Poindexter, who called Rockville, Maryland, his home, died in 2012, two years after he retired from NASA.
. 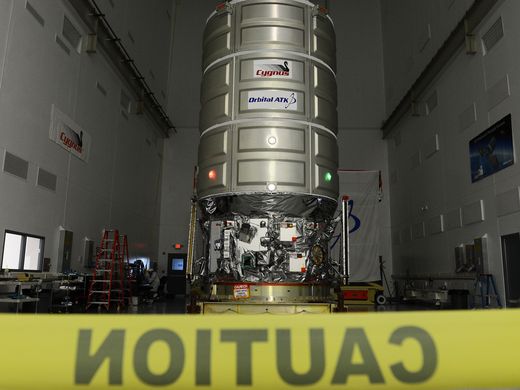 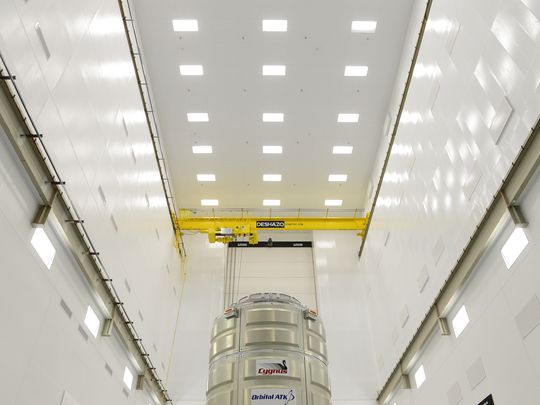 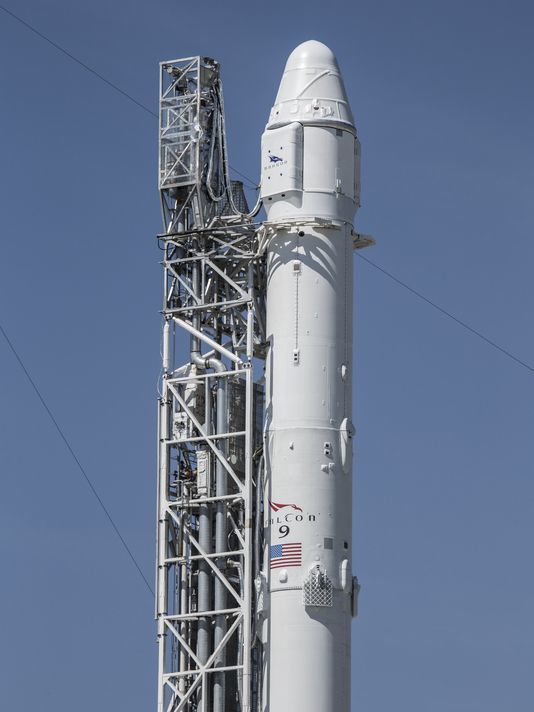 If you can stay up late enough Sunday, it should be a nice night to watch a SpaceX Falcon 9 rocket blast off and then try to land back at Cape Canaveral Air Force Station.
The rocket and a Dragon capsule carrying International Space Station supplies are targeting liftoff at 12:44 a.m. Monday.
Forecasters predict a 90 percent chance of favorable weather for the instantaneous window at Launch Complex 40, with a small chance that clouds or a shower could get in the way.
If the first attempt scrubs, a second try would be possible late Tuesday, when the forecast shows a 70 percent chance of acceptable conditions.
SpaceX is launching its ninth of 20 missions planned under a NASA resupply contract worth up to $3.1 billion.
The Dragon is packed with nearly 5,000 pounds of cargo, including a docking ring needed for astronauts flying in SpaceX or Boeing capsules to link up to the station in the next year or two.
About 10 minutes of liftoff, the first stage of the Falcon 9 will fly back to a landing pad near the tip of Cape Canaveral for the first time since December, when SpaceX achieved its first booster landing.
SpaceX has landed four boosters so far, including three at sea, in its effort to develop reusable rockets that could dramatically lower launch costs.
Quelle: Florida Today
- 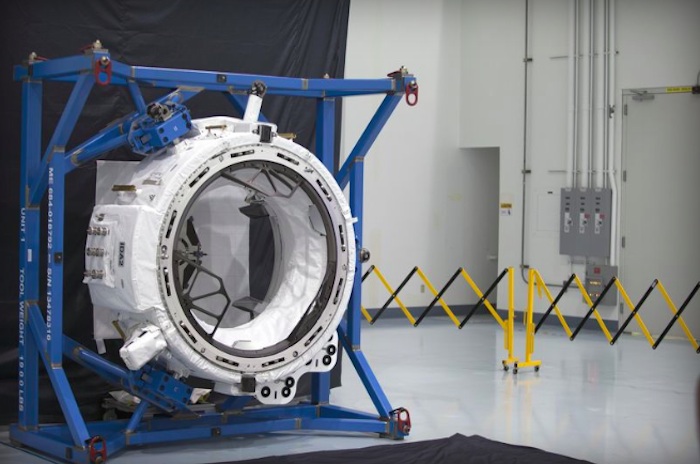 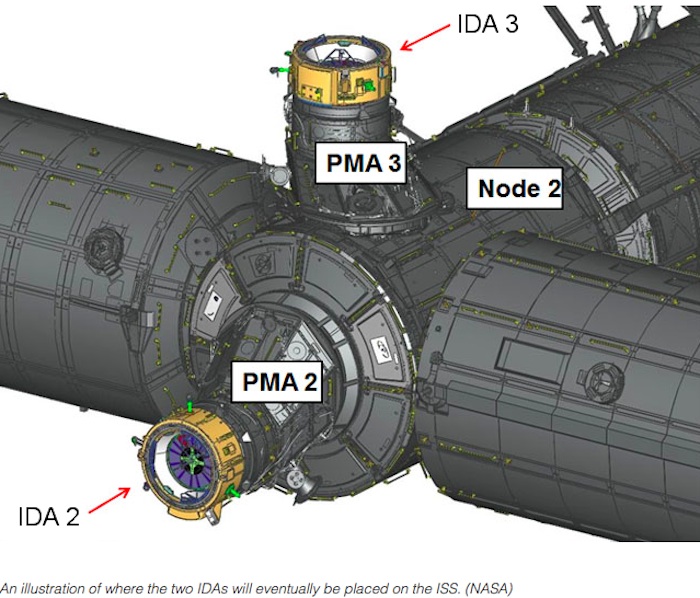 When the SpaceX and Boeing spacecraft reach the ISS, they’ll attach to the IDA. The IDA is outfitted with a host of sensors that spacecraft navigation systems can track and use to guide incoming vehicles through proper docking procedures. This means that astronauts on board the ISS won’t need to be involved with docking the spacecraft.
THE ADAPTER WON’T BE LIMITED TO JUST DOCKING SPACEX AND BOEING VEHICLES
But the adapter won’t be limited to just docking SpaceX and Boeing vehicles. The ring was built according to the International Docking System Standard, an international standard created in 2010 to guide the designs of space docking adapters. That means that future space vehicles, at least those with docking systems that adhere to standard, can also attach to the IDA.
The plan is to install the IDA to the station later this summer. The ISS robotic arm will remove the adapter from the trunk of SpaceX’s Dragon cargo capsule after it docks to the station later next week. The arm will put the IDA near its intended port on the Harmony node, where it will be connected. Then, the astronauts will eventually perform a spacewalk out to the IDA to finalize its installation.
This installation, however, was supposed to have happened already. The loss of the first IDA last year threw NASA’s Commercial Crew plans off balance. Next week’s launch was meant to bring the total number of adapters aboard the station to two. Now there will only be one until a replacement IDA is launched on a future SpaceX cargo mission, which may not happen until 2018.
. 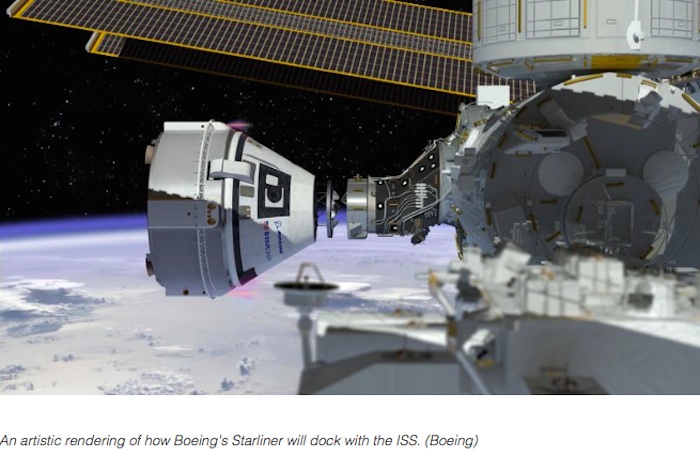