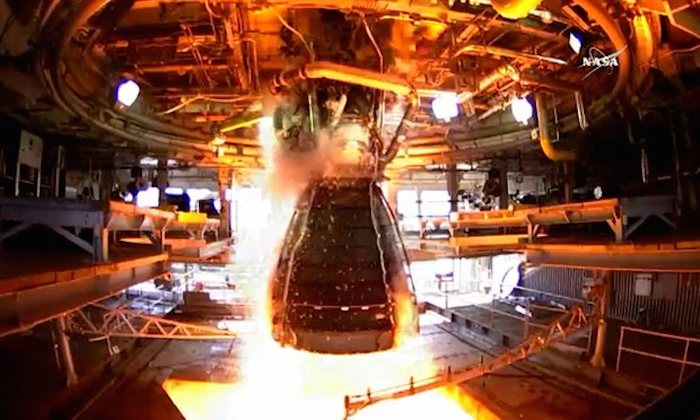 A test of Nasa’s RS-25 engine at the Stennis Space Center in the US. Currently only “very, very small engines” can be tested in the UK. Photograph: Nasa
Nicola Davis
-
The UK Space Agency has announced that it is to spend more than £4 million on a new facility to test space technology that could be used in interplanetary travel.
Dubbed the National Propulsion Test Facility, the site will boost the UK’s capabilities for testing propulsion engines for space exploration as well as a range of other spacecraft and satellites, with construction of the facility expected to be completed within the next two years.
“Propulsion is really important to the UK - it is one of the hidden gems in the whole space industry,” said Mark Ford, head of propulsion engineering at the European Space Agency, the body overseeing the design and building of the facility.
As Ford points out, UK-built rocket engines recently played a crucial role in Nasa’s Juno mission to Jupiter, allowing the spacecraft to be carefully manoeuvred into orbit around the planet.
But the new facilities, says Ford, are a much-needed development. “At the moment, we can test very, very small engines in the UK and have to use facilities overseas to test bigger engines,” he said. That, says Ford, can be both time consuming and expensive. “What the UK wants to do is not only support development of the current engines, but also develop bigger engines for [space] exploration,” he said.
Construction is expected to begin next yearat a site based in Westcott, Buckinghamshire, “the home of rocket engine testing in the UK,” according to Ford. Currently a business park hosting a number of rocket companies, the location was previously the site of the Rocket Propulsions Establishment (RPE). A secret facility set up in the wake of the second world war to develop rocket engines, the RPE’s most famous project was the British medium-range ballistic missile known as Blue Streak, although the project was eventually abandoned.
Ford believes the new facility will prove a boon to UK based companies, helping them to grow, create new jobs and support the European space industry. Among its features, the development will boast a new vacuum facility that, together with existing test cells, will allow high altitudes to be simulated for rocket testing.
While £4 million might seem a hefty price tag, Ford is adamant that it is worth it. “You have to invest in the future,” he said. “Yes, it’s a lot money but if the UK wants to retain the technological edge and be an important space player, it needs resources that are important to industry.”
Quelle: theguardian
Raumfahrt
« Zum vorherigen Eintrag Zum nächsten Eintrag »
2247 Views
Created with page4