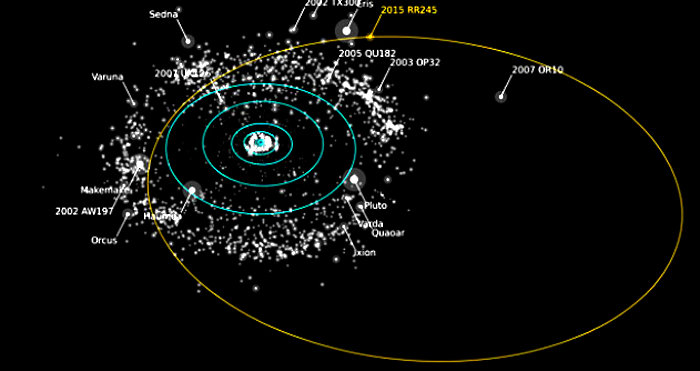 Rendering of the orbit of RR245 (orange line). Objects as bright or brighter than RR245 are labeled. The Minor Planet Center describes the object as the 18th largest in the Kuiper Belt.

An international team of astronomers including researchers from the University of British Columbia has discovered a new dwarf planet orbiting in the disk of small icy worlds beyond Neptune.
The new object is about 700 km in diameter -- roughly one-and-a-half times the size of Vancouver Island -- and has one of the largest orbits for a dwarf planet. Designated 2015 RR245 by the International Astronomical Union's Minor Planet Center, it was found using the Canada-France-Hawaii Telescope on Maunakea, Hawaii, as part of the ongoing Outer Solar System Origins Survey (OSSOS).
"Finding a new dwarf planet beyond Neptune sheds light on the early phases of planet formation," said Brett Gladman, the Canada Research Chair in planetary astronomy at UBC. "Since most of these icy worlds are incredibly small and faint, it's exciting to find a bright one that is easier to study, and which is on an interesting orbit."
RR245 was first spotted in February 2016 by astronomer JJ Kavelaars of the National Research Council of Canada. The OSSOS project uses powerful computers to hunt the images, and Kavelaars was presented with a bright object moving at such a slow rate that it was clearly at least twice as far from Earth Neptune and 120 times further from the Sun than Earth.
The exact size of RR245 is not yet exactly known, as its surface properties need further measurement.
"It's either small and shiny, or large and dull," said Michele Bannister of the University of Victoria, a postdoctoral fellow with the OSSOS.
The vast majority of dwarf planets like RR245 were destroyed or thrown from the solar system as the giant planets moved out to their present positions. RR245 is one of the few dwarf planets that survived to the present day, along with Pluto and Eris, the largest known dwarf planets. RR245 now circles the sun among the remnant population of tens of thousands of much smaller trans-Neptunian worlds, most of which orbit unseen.
Worlds that journey far from the sun have exotic geology with landscapes made of many different frozen materials, as the recent flyby of Pluto by the New Horizons spacecraft showed. RR245 has been on its highly elliptical orbit for at least the last 100 million years. After hundreds of years further than 12 billion km (80 astronomical units, AU) from the sun, RR245 is travelling towards its closest approach at five billion km (34 AU), which it will reach around 2096.
As RR245 has only been observed for one of the 700 years it takes to orbit the sun, where it came from and how its orbit will slowly evolve in the far future is still unknown. Its precise orbit will be refined over the coming years, after which RR245 will be given a name. As discoverers, the OSSOS team can submit their preferred name for RR245 to the International Astronomical Union for consideration.
RR245 is the largest discovery and the only dwarf planet found by OSSOS, which has discovered more than five hundred new trans-Neptunian objects. The discovery is only possible due to the exceptional observing capabilities of the Canada-France-Hawaii Telescope.
Background
Outer Solar System Origins Survey involves a collaboration of nearly 50 scientists at institutes and universities across the world. OSSOS is based on observations obtained with MegaPrime/MegaCam, a joint project of the Canada-France-Hawaii Telescope (CFHT) and CEA/DAPNIA, and on data produced and hosted at the Canadian Astronomy Data Centre. CFHT is operated by the National Research Council of Canada, the Institute National des Sciences de l'Universe of the Centre National de la Recherche Scientifique of France, and the University of Hawaii, with OSSOS receiving additional access due to contributions from the Institute of Astronomy and Astrophysics, Academia Sinica, National Tsing Hua University, and National Science Council, Taiwan.
Story Source:
The above post is reprinted from materials provided by University of British Columbia. Note: Materials may be edited for content and length.
Quelle: SD
Astronomie
« Zum vorherigen Eintrag Zum nächsten Eintrag »
2205 Views
Created with page4