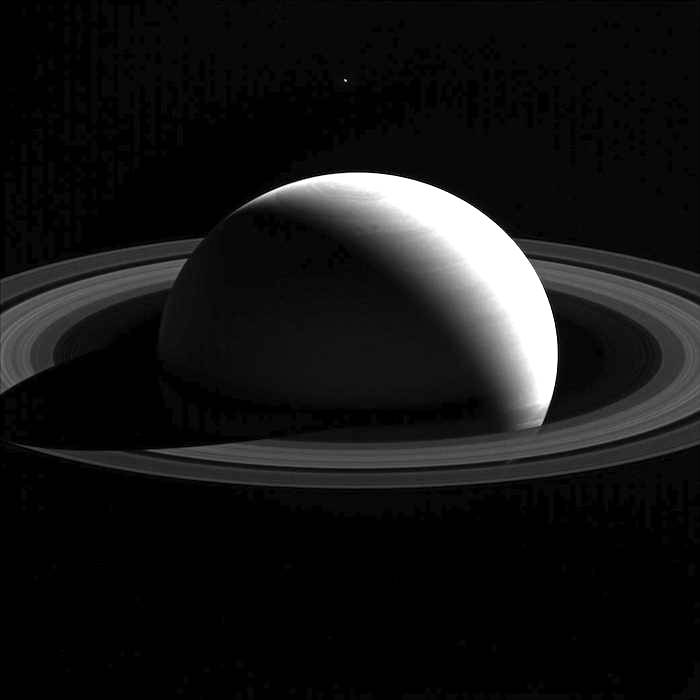 An illusion of perspective, Saturn’s moon Tethys seems to hang above the planet's north pole in this view from NASA's Cassini spacecraft.
Tethys (660 miles or 1,062 kilometers across) is actually farther away than Saturn in this image. Lacking visual clues about distance, our brains place the moon above Saturn's north pole. Tethys, like all of Saturn's major moons and its ring system, orbits almost exactly in the planet's equatorial plane.
This view looks toward the sunlit side of the rings from about 17 degrees above the ring plane. The image was taken with the Cassini spacecraft's wide-angle camera on Jan. 26, 2015 using a spectral filter which preferentially admits wavelengths of near-infrared light centered at 752 nanometers.
The view was acquired at a distance of approximately 2.1 million miles (3.4 million kilometers) from Saturn. Image scale on Saturn is 120 miles (200 kilometers) per pixel. Tethys has been brightened by a factor of three relative to Saturn to enhance its visibility.
The Cassini mission is a cooperative project of NASA, ESA (the European Space Agency) and the Italian Space Agency. The Jet Propulsion Laboratory, a division of the California Institute of Technology in Pasadena, manages the mission for NASA's Science Mission Directorate, Washington. The Cassini orbiter and its two onboard cameras were designed, developed and assembled at JPL. The imaging operations center is based at the Space Science Institute in Boulder, Colorado.
Quelle: NASA
Astronomie
« Zum vorherigen Eintrag Zum nächsten Eintrag »
2275 Views
Created with page4