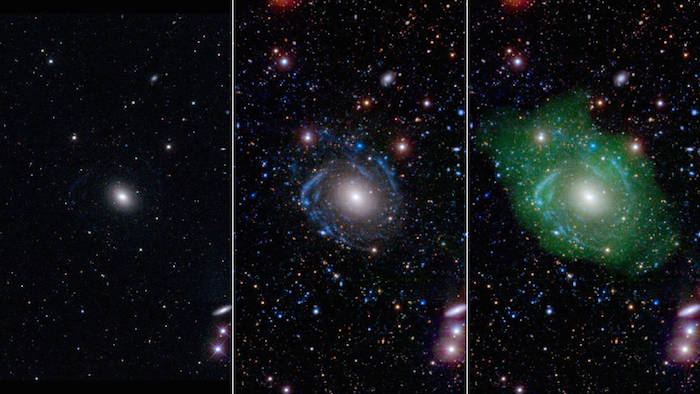 At left, in optical light, UGC 1382 appears to be a simple elliptical galaxy. But spiral arms emerged when astronomers incorporated ultraviolet and deep optical data (middle). Combining that with a view of low-density hydrogen gas (shown in green at right), scientists discovered that UGC 1382 is gigantic.
Credits: NASA/JPL/Caltech/SDSS/NRAO/L. Hagen and M. Seibert
Full image and caption
About 250 million light-years away, there's a neighborhood of our universe that astronomers had considered quiet and unremarkable. But now, scientists have uncovered an enormous, bizarre galaxy possibly formed from the parts of other galaxies.
A new study to be published in the Astrophysical Journal reveals the secret of UGC 1382, a galaxy that had originally been thought to be old, small and typical. Instead, scientists using data from NASA telescopes and other observatories have discovered that the galaxy is 10 times bigger than previously thought and, unlike most galaxies, its insides are younger than its outsides, almost as if it had been built using spare parts.
"This rare, 'Frankenstein' galaxy formed and is able to survive because it lies in a quiet little suburban neighborhood of the universe, where none of the hubbub of the more crowded parts can bother it," said study co-author Mark Seibert of the Observatories of the Carnegie Institution for Science, Pasadena, California. "It is so delicate that a slight nudge from a neighbor would cause it to disintegrate."
Seibert and Lea Hagen, a graduate student at Pennsylvania State University, University Park, came upon this galaxy by accident. They had been looking for stars forming in run-of-the-mill elliptical galaxies, which do not spin and are more three-dimensional and football-shaped than flat disks. Astronomers originally thought that UGC 1382 was one of those.
But while looking at images of galaxies in ultraviolet light through data from NASA's Galaxy Evolution Explorer (GALEX), a behemoth began to emerge from the darkness.
"We saw spiral arms extending far outside this galaxy, which no one had noticed before, and which elliptical galaxies should not have," said Hagen, who led the study. "That put us on an expedition to find out what this galaxy is and how it formed."
Researchers then looked at data of the galaxy from other telescopes: the Sloan Digital Sky Survey, the Two Micron All-Sky Survey (2MASS), NASA's Wide-field Infrared Survey Explorer (WISE), the National Radio Astronomy Observatory's Very Large Array and Carnegie's du Pont Telescope at Las Campanas Observatory. After GALEX revealed previously unseen structures to the astronomers, optical and infrared light observations from the other telescopes allowed the researchers to build a new model of this mysterious galaxy.
As it turns out, UGC 1382, at about 718,000 light-years across, is more than seven times wider than the Milky Way. It is also one of the three largest isolated disk galaxies ever discovered, according to the study. This galaxy is a rotating disk of low-density gas. Stars don't form here very quickly because the gas is so spread out.
But the biggest surprise was how the relative ages of the galaxy's components appear backwards. In most galaxies, the innermost portion forms first and contains the oldest stars. As the galaxy grows, its outer, newer regions have the youngest stars. Not so with UGC 1382. By combining observations from many different telescopes, astronomers were able to piece together the historical record of when stars formed in this galaxy -- and the result was bizarre.
"The center of UGC 1382 is actually younger than the spiral disk surrounding it," Seibert said. "It's old on the outside and young on the inside. This is like finding a tree whose inner growth rings are younger than the outer rings."
The unique galactic structure may have resulted from separate entities coming together, rather than a single entity that grew outward. In other words, two parts of the galaxy seem to have evolved independently before merging -- each with its own history.
At first, there was likely a group of small galaxies dominated by gas and dark matter, which is an invisible substance that makes up about 27 percent of all matter and energy in the universe (our own matter is only 5 percent). Later, a lenticular galaxy, a rotating disk without spiral arms, would have formed nearby. At least 3 billion years ago, the smaller galaxies may have fallen into orbit around the lenticular galaxy, eventually settling into the wide disk seen today.
More galaxies like this may exist, but more research is needed to look for them.
"By understanding this galaxy, we can get clues to how galaxies form on a larger scale, and uncover more galactic neighborhood surprises," Hagen said.
The GALEX mission, which ended in 2013 after more than a decade of scanning the skies in ultraviolet light, was led by scientists at Caltech in Pasadena, California. NASA's Jet Propulsion Laboratory, also in Pasadena, managed the mission and built the science instrument. Data for the 2MASS and WISE missions are archived at the Infrared Processing and Analysis Center (IPAC) at Caltech. JPL is managed by Caltech for NASA.
Quelle: NASA
Astronomie
« Zum vorherigen Eintrag Zum nächsten Eintrag »
2170 Views
Created with page4