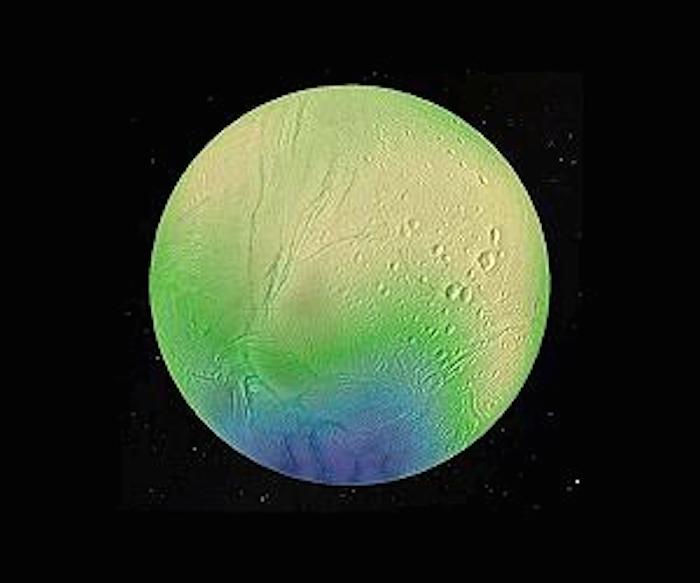 With eruptions of ice and water vapor, and an ocean covered by an ice shell, Saturn's moon Enceladus is one of the most fascinating in the solar system, especially as interpretations of data provided by the Cassini spacecraft have been contradictory until now.
An international team including researchers from the Laboratoire de Planetologie Geodynamique de Nantes (CNRS/Universite de Nantes/Universite d'Angers), Charles University in Prague, and the Royal Observatory of Belgium (and the Instituut voor Sterrenkunde) recently proposed a new model that reconciles different data sets and shows that the ice shell at Enceladus's south pole may be only a few kilometers thick.
This suggests that there is a strong heat source in the interior of Enceladus, an additional factor supporting the possible emergence of life in its ocean. The study has just been published online on the website of Geophysical Research Letters.
Initial interpretations of data from Cassini flybys of Enceladus estimated that the thickness of its ice shell ranged from 30 to 40 km at the south pole to 60 km at the equator. These models were unable to settle the question of whether or not its ocean extended beneath the entire ice shell.
However, the discovery in 2015 of an oscillation in Enceladus's rotation known as a libration, which is linked to tidal effects, suggests that it has a global ocean and a much thinner ice shell than predicted, with a mean thickness of around 20 km. Nonetheless, this thickness appeared to be inconsistent with other gravity and topography data.
In order to reconcile the different constraints, the researchers propose a new model in which the top two hundred meters of the ice shell acts like an elastic shell. According to this study, Enceladus is made up successively of a rocky core with a radius of 185 km, and an internal ocean approximately 45 km deep, isolated from the surface by an ice shell with a mean thickness of around 20 km, except at the south pole where it is thought to be less than 5 km thick.
In this model, the ocean beneath the ice makes up 40% of the total volume of the moon, while its salt content is estimated to be similar to that of Earth's oceans.
All this implies a new energy budget for Enceladus. Since a thinner ice shell retains less heat, the tidal effects caused by Saturn on the large fractures in the ice at the south pole are no longer enough to explain the strong heat flow affecting this region.
The model therefore reinforces the idea that there is strong heat production in Enceladus's deep interior that may power the hydrothermal vents on the ocean floor. Since complex organic molecules, whose precise composition remains unknown, have been detected in Enceladus's jets, these conditions appear to be favorable to the emergence of life.
The relative thinness of the ice shell at the south pole could also allow a future space exploration mission to gather data, in particular using radar, which would be far more reliable and easy to obtain than with the 40 km thick ice shell initially calculated. It looks as if Enceladus still has many secrets in store!
Quelle: SD
Astronomie
« Zum vorherigen Eintrag Zum nächsten Eintrag »
2766 Views
Created with page4