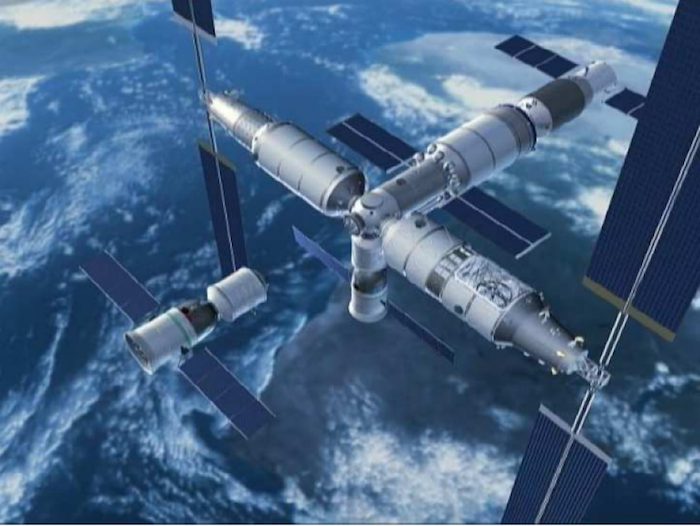 China has signed an agreement with the United Nations to open its future space station to spacecraft, science experiments and even astronauts from countries around the world.
The agreement was laid out by Ms Wu Ping, Deputy of China's Manned Space Agency (CMSA), in a presentation at the UN’s Committee on the Peaceful Uses of Outer Space (COPUOS) annual session in Vienna on Tuesday.
The move is aimed at boosting international cooperation in space and spreading the benefits of on-orbit research and opportunities provided by the Chinese Space Station, the core module of which will launch in 2018.
“This is an exciting opportunity to further build the space capacity of developing countries and increase understanding of the benefits space can bring to humankind, including for the achievement of the Sustainable Development Goals,” said Director of the UN Office for Outer Space Affairs (UNOOSA) Simonetta Di Pippo in a press statement.
. 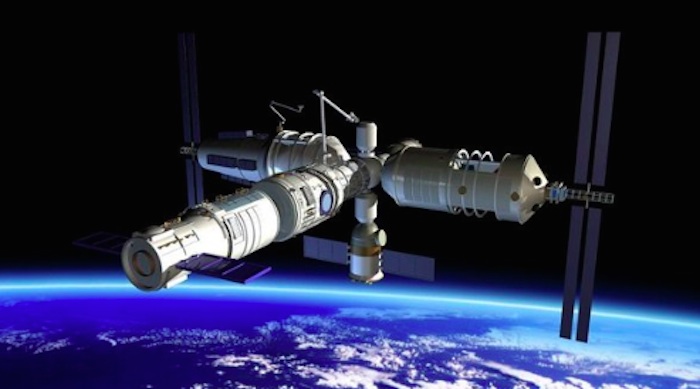 Under the agreements, China and UNOOSA will work together to boost international cooperation, outreach and provide opportunities for UN Member States to send space experiments and astronauts to the Chinese Space Station.
UNOOSA and CMSA will work together to solicit proposals for payloads and experiments from scientists all over the world, with projects to be decided by international selection committees.
“Space exploration is the common dream and wish of humankind. We believe that the implementation of the agreements will definitely promote international cooperation on space exploration, and create opportunities for United Nations Member States, particularly developing countries, to take part in, and benefit from, the utilisation of China’s space station,” said Wu Ping.
.

Space leadership
China has already signed initial space station cooperation agreements with the Russian and European space agencies. While the European Space Agency (ESA) has begun training astronauts in basic Chinese, there is no specific plan yet to send astronauts to the Chinese facility.
With the International Space Station not guaranteed to be funded beyond 2024, China’s own orbital station could soon be only show in Low Earth Orbit.
Such a development would have repercussions for the perception of global space leadership and the role of the United States in particular.
A successful and internationally engaging CSS project would also be a soft power coup for China.
Development of China's Space Station
Ms Wu’s presentation stated that the CSS project is well under way, with the modules, new types of launch vehicle and other related facilitates already under development.
The core module of the Chinese Space Station, Tianhe-1, is due to be launched in 2018, with two science modules to join in orbit before 2022, when the station is expected to be declared fully operational.
. 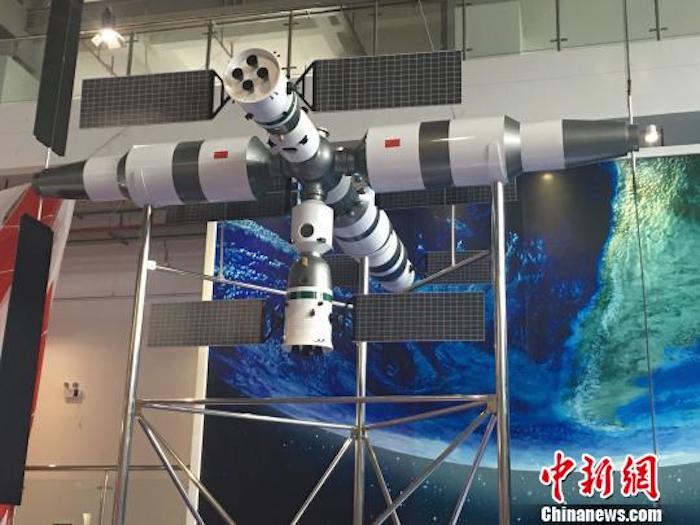 Above: A model of the CSS with a Shenzhou vessel docked below, on display during China's first space day in April 2016.
Once in orbit the core module will be visited by several crewed spaceships and cargo vessels to test assembly, long-term human spaceflight and extra-vehicular activity (EVA).
The CSS modules will be launched by a Long March 5B rocket from the new Wenchang Satellite Launch Centre, which will see its debut launch take place on June 25 when the Long March 7 makes its maiden flight.
The Long March 7 has been designed to launch Tianzhou cargo vessels. The first test of this cargo ship will take place in the first half of next year, visiting the Tiangong-2 space lab which is due for launch in September.
In October Tiangong-2 will be visited by two astronauts for 30 days as part of the Shenzhou-11 mission.
. 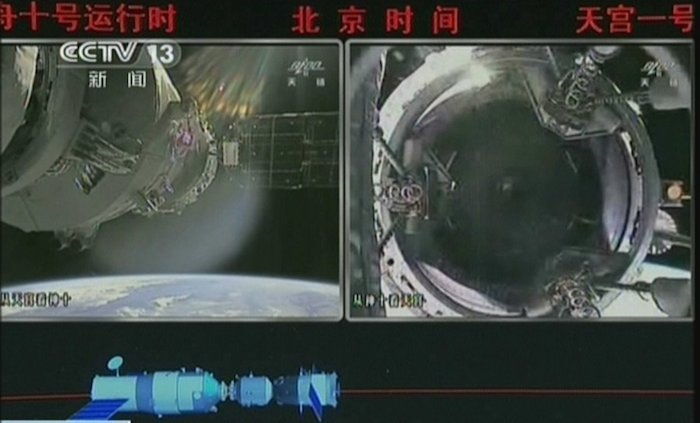 Above: Shenzhou-10 rendezvous and docking with Tiangong-1 in 2013.
As with Shenzhou-11 and previous missions in the series, the crewed spacecraft heading to the CSS will be launched on a Long March 2F rocket from the Jiuquan Satellite Launch Centre in the Gobi Desert.
Joining the three modules will be a Hubble-class optical telescope, which will orbit in the same path as the CSS and be capable of docking with it for maintenance and repairs.
Officials have previously said the ‘Xuntian’ sky survey telescope will provide a level of resolution no less than the famous Hubble space telescope, but with a field of view 300 times larger.
.

Above: An illustration of China's Xuntian space telescope.
It will study the formation and evolution of distant celestial bodies, including stars, exoplanets, galaxies, and black holes, contribute to dark energy and dark matter research and the early stages of the universe.
The two science modules will feature experiment racks focusing on the areas of space life sciences and biotechnology, microgravity fluid physics and combustion, material science in space, fundamental physics in microgravity and other multi-purpose uses.
Beyond these, China is open to international collaborative development of a range devices, components, subsystems and even new modules.
. 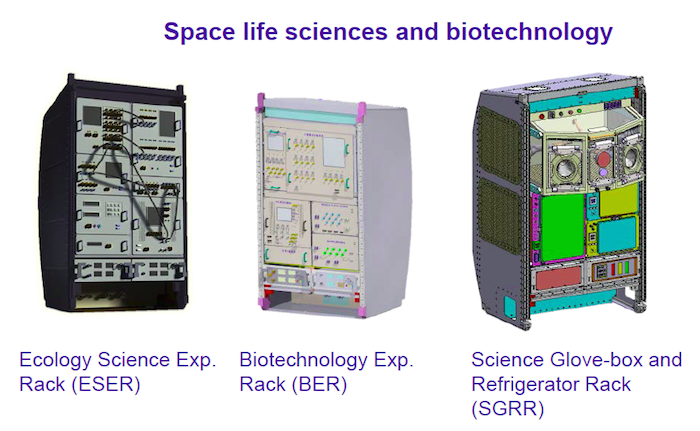 Above: Space life science experiment racks for the CSS (CMSA).
The Chinese Space Station is the third stage of a three-step strategy initiated in 1992 to see China develop human spaceflight capabilities through its Shenzhou project, master technologies and techniques such as EVA and docking with the Tiangong test labs and finally establish a long-term human presence in orbit.
The unmanned Shenzhou-1 was launched on November 20, 1999, before Yang Liwei became the first Chinese in space aboard Shenzhou-5 on October 15, 2003.
. 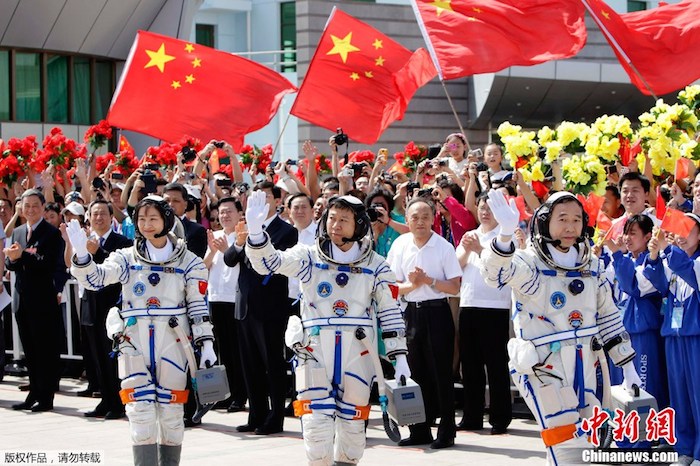 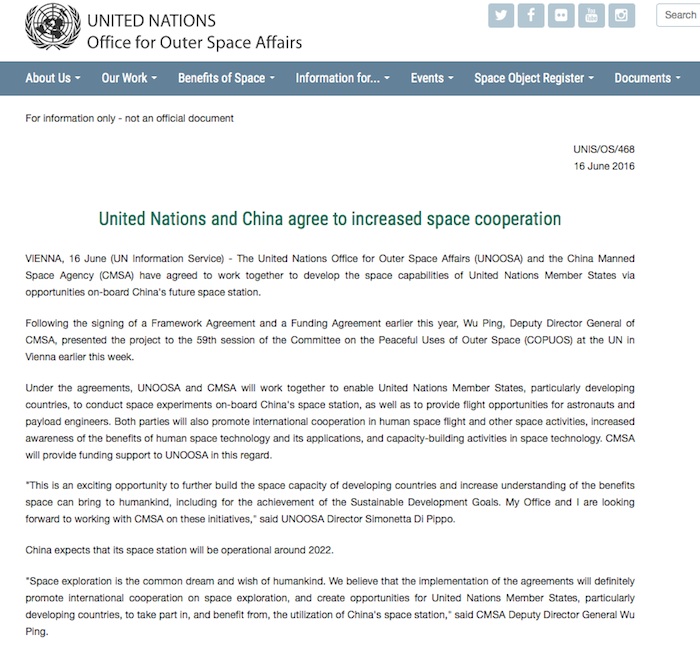