Toxic splash? Russian rocket stage to come down in Canada's Arctic waters
Debris from a Russian rocket launch is slated to fall Saturday into Baffin Bay
Environmentalists are angry that a Russian rocket stage potentially carrying highly toxic chemicals is expected to splash down this weekend in a biodiversity hotspot in the Canadian Arctic.
"The idea of dropping a missile full of toxic chemicals in the Arctic waters off Baffin Island is just as preposterous as drilling for oil there," Greenpeace Arctic campaigner Alex Speers-Roesch said Tuesday.
"Dumping these chemicals from a ship would be a clear violation of international and Canadian law, and it is no more acceptable when it is dumped from the air."
A spokesman from the Canadian government was not immediately available.
An international aviation authority has issued a notice warning that debris from a Russian rocket launch is slated to fall Saturday into Baffin Bay. That's outside Canada's territorial waters but inside an economic zone the country partially controls.
May contain extremely toxic fuel
The space debris is a stage from a rocket set off under Russia's Rokot program, a for-profit service that launches commercial satellites, said Michael Byers, a professor of international law and an Arctic expert at the University of British Columbia.
Byers said Russia is following the rules by informing aviation authorities of the launch and the splashdown. The stage is falling over a remote stretch of water between Greenland and the southern tip of Ellesmere Island.
He notes Rokot uses repurposed Cold-War-era intercontinental ballistic missiles to launch satellites. Those missiles, the SS-19, use hydrazine for fuel.
Hydrazine is known to be extremely toxic — so toxic that technicians working with it have to use pressurized hazmat suits, Byers said.
"The United States has very deliberately moved away from it because of the health and environment risk."
The U.S. last used hydrazine as a launch propellant in its Titan missile program which ended a decade ago.
North Water Polynya at risk
The rocket stage is expected to come down in what is called the North Water Polynya, an 85,000-square-kilometre area of Arctic sea that naturally remains ice free year round.
The open water is a refuge for narwhal, beluga, walrus and bowhead whales. Its plankton-rich waters draw shoals of Arctic cod, providing food for an ecosystem that also supports seals, polar bears and millions of seabirds.
The polynya — the largest in the Arctic — is hunted by Inuit from Canada and Greenland. It's also connected through ocean currents to Lancaster Sound, where the Canadian government is considering creation of a marine protected area.
Byers said little is known about how hydrazine reacts in water, especially when it is cold and ice-choked. Nor is there any information on how much unused hydrazine the rocket stage is likely to hit the water with.
An American rocket stage that came down off the coast of Newfoundland in 2005 released more than two tonnes of a hydrazine-based fuel.
Quelle: CBC-News
.
Update: 5.06.2016
.
Rokot launch vehicle blasts off from Plesetsk space center
The Force’s Deputy Commander Lt Gen Aleksander Golovko was in charge of the launch 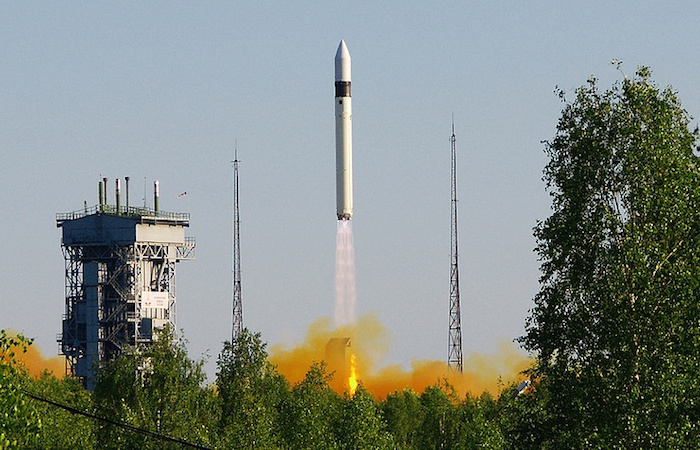 Russia’s Aerospace Force has launched a Rokot carrier rocket from the Plesetsk space center (in northern Arkhangelsk region), Russian Defense Ministry’s press service told TASS on Saturday.
"On Saturday, at 17.00 Moscow Standard Time (15.00 GMT), a combat crew of the Russian Aerospace Force’ Space Troops carried out the successful launch of a Rokot small expendable space launch vehicle with a defense satellite atop in the interests of the Russian Defense Ministry," the press service said adding the Force’s Deputy Commander Lt Gen Aleksander Golovko was in charge of the launch.
"The pre-launch preparations and launch of the Rokot carrier rocket were carried out in a routine mode," the spokesperson said. "Ground services of the Aerospace Force’s Space Troops were supervising the launch and flight of the space vehicle."
Rokot is a space launch vehicle capable of delivering light and medium payloads to orbit. It was created on the basis of the RS-18 (SS-19) intercontinental ballistic missile manufactured by the Khrunichev State Research and Production Center. After the end of the Cold War the missiles were re-purposed by the center to serve as space launch vehicles.
Rokot (also spelled as Rockot) consists of a booster unit - that provides the first and second stages - and the Briz-KM (also spelled as Breeze-KM) upper stage containing the propulsion compartment, the hermetically sealed equipment compartment and the inter-stage compartment.
The first Rokot carrier rocket blasted off from the Plesetsk spaceport on May 16, 2000. As many as 26 launches have taken place since, which lifted 65 spacecraft into low earth orbit.
Quelle: TASS
Raumfahrt
« Zum vorherigen Eintrag Zum nächsten Eintrag »
3333 Views
Created with page4