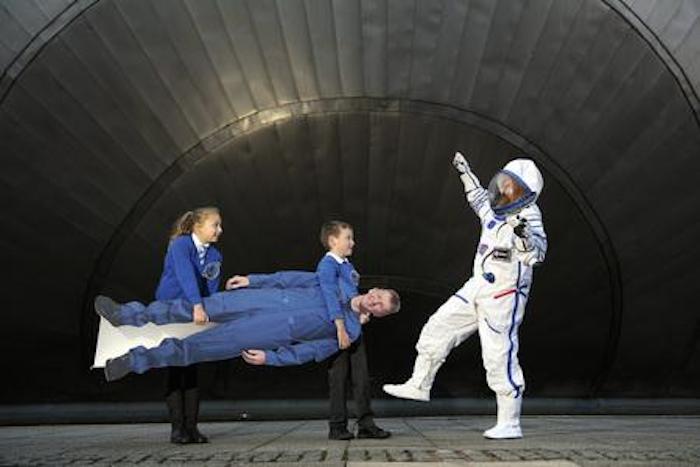 The European Space Agency’s first British astronaut Tim Peake will return to Earth in June after spending six months on board the International Space Station – and Glasgow Science Centre is hosting a celebratory ‘Landing Party’.
During the event on June 18 and 19, visitors to the Clydeside attraction can take part in a variety of activities.
They will have the chance to design, build and launch a rocket, take on the robotic arm challenge like the ones astronauts use on the space station, meet the centre’s very own astronaut who will be wearing a rare replica of Tim Peake’s own Sokol Spacesuit, visit where the astronaut has called home for the last six months in the digital planetarium, and see a real Space Shuttle Shield.
Backed by the UK Space Agency, Glasgow Science Centre and 20 other centres across the UK has joined forces with the Tim Peake to provide children all over the country with an opportunity to learn about human space flight and follow life on the space station.
The centre has been running the ‘Destination Space’ programme since October which has seen families take part in shows and workshops and 500 school pupils join staff for a launch party.
Tim Peake’s Principia mission has seen him run science experiments for researchers from all over the planet, including trying to grow blood vessels and protein crystals, and using a furnace to melt and cool metal alloys as they float in mid-air.
The astronaut wants his mission to inspire people, especially children, to develop their interest in science and to learn more about the career opportunities available.
Stephen Breslin, chief executive of Glasgow Science Centre said: “Space exploration and the wonders of the universe captures everyone’s imaginations. From those who grew up with the moon landings in the 70s through to the modern day explorations of Mars. Tim’s mission has been a fantastic opportunity for us to excite and engage our visitors with astronomy and space science and Scotland’s involvement in these areas.
“It is well known that space and astronomy provide major inspirations for young people as they consider their future studies and career options, and it's critical for us that we continue to attract young people into science and engineering to underpin our future competitiveness in the global knowledge economy.
“Everyone at the Centre has been following Tim’s journey from his preparations, to the launch and now onboard the ISS so what better way to welcome him home having a stellar party with our visitors.”
To find out more about the Tim Peake Landing Party, visit www.glasgowsciencecentre.org
Quelle: EveningTimes
Raumfahrt
2163 Views
Created with page4