China launches new satellite for civilian hi-res mapping
-
BEIJING, China launched a new civilian high-resolution mapping satellite on Monday from the Taiyuan Satellite Launch Center in Shanxi Province.
The 2.7-tonne Ziyuan III 02 satellite took off on the back of a Long March 4B rocket at 11:17 a.m. Beijing time, according to the center. It was the 228th flight mission by a Long March carrier rocket.
Also on board the rocket were two NewSat satellites from Uruguay. All three satellites have entered preset orbits, the Taiyuan center said in a statement.
Ziyuan III 02 will be used in land resource surveys, natural disaster prevention, agricultural development, water resources management and urban planning, among other tasks. It is the second satellite in a remote-sensing mapping system China plans to build by 2030.
It will join its predecessor Ziyuan III 01, launched in January 2012, to form a network and capture high-definition, 3-D images and multispectral data.
According to Cao Haiyi, chief designer of the Ziyuan III satellites, the new satellite is able to collect 3-D images of objects 2.5 meters or longer, and reduce deviation of vertical positioning to one meter using an onboard laser range finder.
Previously, Ziyuan III 01 could only resolve to four meters in 3-D imaging and five meters in vertical measurement.
Together, the two Ziyuan III satellites boast a "revisit time," the time elapsed between observations of the same point on Earth, of around three days, down from five to six days when only Ziyuan III 01 was operating.
"Technical indicators of the Ziyuan III satellites are on par with their most advanced peers anywhere in the world," Cao said.
Quelle: XINHUA
. 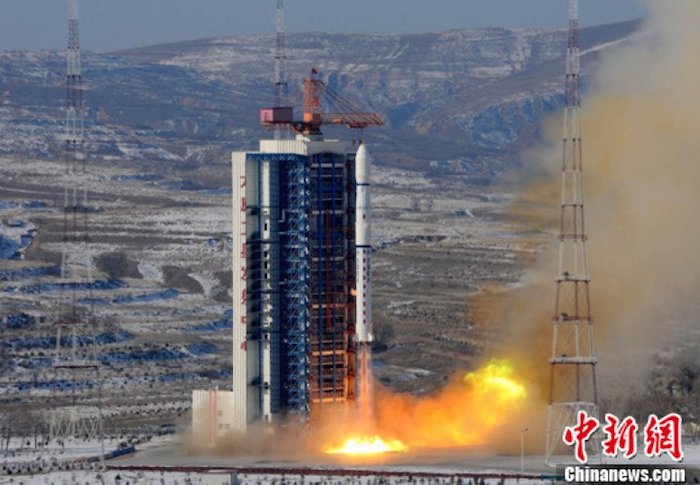 China launched its second Ziyuan-3 series high-resolution remote sensing satellite along with two small Argentinian craft on Monday morning.
The rocket and payloads lifted off from the Taiyuan Satellite Launch Centre in Shanxi Province at 11:17am Beijing time (3:17am UTC) on a Long March 4B rocket.
Ziyuan-3 (II) is a civilian geological mapping satellite, while the the involvement of Satellogi of Argentina, with its two satellites, granted followers rare access to slightly delayed footage of a usually covert Chinese satellite launch via Periscope.
The satellites were successfully injected into similar sun-synchronous solar orbits at an altitude of around 500km and inclination of 97 degrees.
The four visible light and infrared cameras of China's Ziyuan-3 (II) are designed to assist with natural disaster-reduction and prevention, agriculture, water conservation, urban planning and other sectors for at least four years.
The cameras are capable of imaging 50km-wide swaths of Earth, with a stereo mapping camera providing a resolution of 2.7m. Further technical details are laid by Nasaspaceflight.
The satellite, as with the first Ziyuan-3 which launched in 2012, was developed by the China Academy of Space Technology (CAST) under the China Aerospace Science and Technology Corporation (CASC), the main contractor for China's space program.
The 37kg ÑuSat-1 and ÑuSat-2, also named Fresco and Batata, are the first visible and infrared observation satellites in the planned 25-satellite Aleph-1 constellation.
The South American startup Satellogic aims to establish a constellation of 300 small Earth Observation satellites to provide near-real time imagery of the Earth, competing against other, similar commercial ventures.
The mission was China’s sixth launch of 2016. It follows the Yaogan-30 spy satellite two weeks ago, the Shijian-10 retrievable microgravity space science probe in April, and the launches of Belintersat-1 for Belarus and two Beidou GNSS satellites.
Today's launch was the 228th overall launch of China's Long March rocket families.
China's 2016 space activities
2016 will be a crucial year for China's growing space ambitions, with a string of new technologies, space science activities and human spaceflight missions.
Tiangong-2, China's second space lab, will be launched in the third quarter of the year, followed shortly after by the crewed Shenzhou-11 mission.
The two craft will dock and two astronauts will spend 30 days in orbit on Tiangong-2, greatly extending the record stay in space for Chinese astronauts as the country looks towards establishing its own space station.
Quelle: gbtimes
Raumfahrt
1801 Views
Created with page4