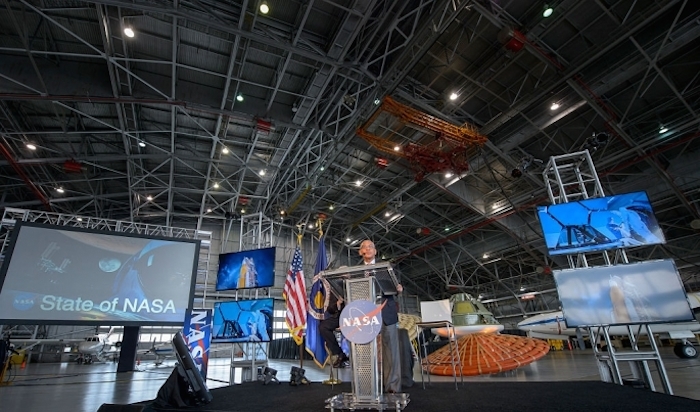 NASA Administrator Charles Bolden says it is unlikely that the space agency will be able to go on a joint space exploration with China under his tenure.
-
A joint space exploration project between the United States and China would remain "sci-fi" considering how the American legislature blocked NASA from collaborating with the Asian giant in any space-related ventures, experts say.
Charles Bolden, the administrator of the National Aeronautics and Space Administration (NASA), revealed his thoughts on the possibility that China and the U.S. could explore space together while responding to the press' queries on Monday at the Mitchell Institute on Capitol Hill.
His statements come as a surprise considering how the U.S. Congress passed a law in 2011 that prevents NASA from ever entertaining any Chinese visitors, regardless of whether or not they are working for the government or a private entity, in their facilities.
Bolden's Bold Words
Cited by Voice of America, Bolden made some bold words regarding the possibility of a Sino-U.S. joint space exploration.
"We were in an incredible Cold War with the Soviets at the time we flew Apollo-Soyuz; it was because leaders in both nations felt it was time," he said. "That represented a great use of soft power, if you will. Look where we are today. I think we will get there [with China]. And I think it is necessary."
He also said that while China is still banned from NASA, they continue to entertain "wishful thinking" that the country could be a partner in exploring the universe one day, when the country is no longer considered an adversary of the U.S.
"We tend to engage in a lot of wishful thinking when it comes to China," he stated. "We should understand China is an explicit adversary and enemy of the United States, according to their own internal documents and strategies and publications."
But as much as he wishes to see Chinese co-workers on the field, Bolden does not expect that it could happen any time during his tenure.
Distrust
According to the Global Times, collaboration between China and America's NASA would remain science-fiction for a while.
The Chinese state-media cited experts who said that the scenario at the Hollywood flick "The Martian" where Chinese and American space experts joined forces to bring mankind deeper into outer space is not likely to occur in the near future. This is because China remains banned from participating in any NASA project due to an apparent distrust between the country and the U.S.
"Space technologies can be used for military purposes, while astronautic and aeronautics weapons will play a great role in future wars," Beihang University School of Aeronautic Science and Engineering professor Huang Jun explained. "Due to the countries' national interests, the U.S. and China still face difficulties in space cooperation."
Aside from that, an unnamed source of the Global Times said that NASA is also prohibited from entering Beijing's aerospace facility, which makes any cooperation between the two possible only if both nations let go of their distrust.
Quelle: YIBADA
Raumfahrt
1968 Views
Created with page4