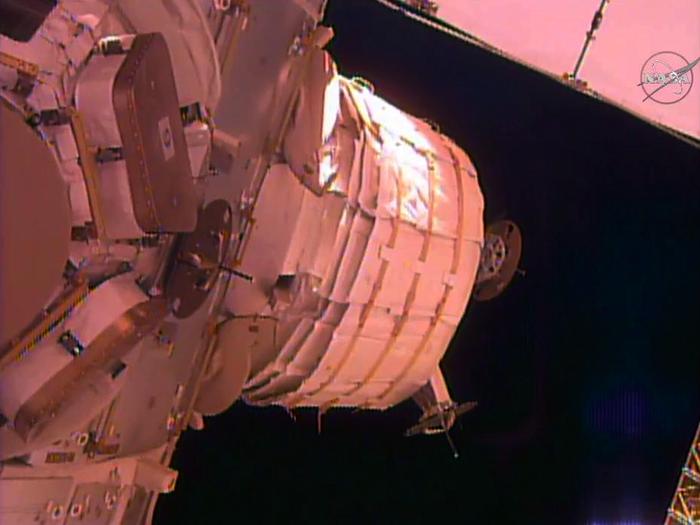 NASA is working closely with Bigelow Aerospace to understand why its module did not fully expand today as planned. Engineers are meeting at the Johnson Space Center in Houston to discuss a path forward for the Bigelow Expandable Activity Module (BEAM). They are evaluating data from the expansion that has occurred thus far. If the data supports a resumption of operations, another attempt to complete the module’s expansion could come as early tomorrow.
With the team focused on analyzing BEAM’s status, a previously scheduled teleconference for Thursday, May 26 at 10 a.m. EDT has been postponed until we have more information available to share. NASA will send an updated media advisory when the next step for BEAM operations is decided upon.
BEAM is a technology demonstration from which we will learn more about how these types of habitats will perform in a microgravity environment.
BEAM is an example of NASA’s increased commitment to partnering with industry to enable the growth of the commercial use of space. The project is co-sponsored by NASA’s Advanced Exploration Systems Division and Bigelow Aerospace.
Quelle: NASA
-
Update: 29.05.2016
.
NASA inflates spare room in space 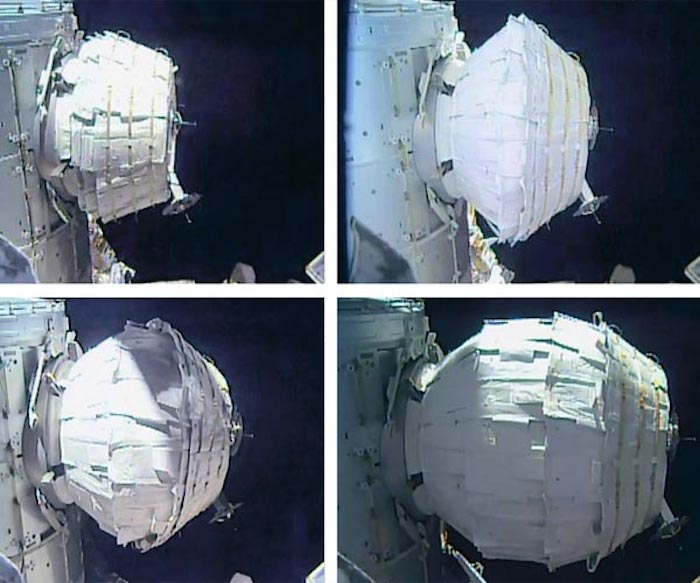 SA on Saturday successfully expanded and pressurized an add-on room at the International Space Station two days after aborting the first attempt when it ran into problems.
The flexible habitat, known as the Bigelow Expandable Activity Module (BEAM), completed slowly extending 67 inches (170 centimeters) at 4:10 pm (2010 GMT) following more than seven hours during which astronaut Jeff Williams released short blasts of air into the pod's walls from the orbiting lab using a manual valve.
After the expansion was completed, he opened eight air tanks inside BEAM, pressurizing the pod to a level close to the space station's 14.7 pounds per square inch.
"The module is fully expanded at this point and fully pressurized," NASA spokesman Daniel Huot said. "A very successful day today with the expansion of the first expandable human-rated habitat to ever be flown into space."
Astronauts will now perform a series of tests to ensure the pod does not leak air and conduct other preparations before entering it through the station's Tranquility module for the first time in approximately a week, NASA said.
The inflation process may be better described as "unfolding" since it takes very little air to bring the pod to full size, experts said. Only about 0.4 pounds per square inch (psi) is needed to expand BEAM to its full shape.
The expansion caused a popping sound not unlike that of popcorn as the structure slowly filled out, live video feed from the space station on NASA television showed.
NASA is testing expandable habitats astronauts might use on the Moon or Mars in the coming decades.
Efforts to inflate the flexible habitat got under way around 9 am (1300 GMT) after the first attempt failed on Thursday because of too much friction between the pod wall's fabrics, possibly because it had been left packed longer than originally planned.
Astronauts are expected to re-enter the module several times a year throughout the two-year technology demonstration to retrieve sensor data and assess conditions inside the unit, including how well it protects against space radiation, the US space agency said.
Bigelow Aerospace developed the first-of-its-kind habitat as part of an $18 million contract with NASA.
Fully expanded, the module is 13 feet long (four meters) by 10.5 feet (3.23 meters) wide.
Expandable habitats' benefit lies in the little space they take up in spacecrafts' cargo holds while providing greater living and working space once inflated.
But key questions that remain to be answered include how well such pods would protect people against solar radiation, debris and the temperature extremes of space.
Quelle: SD
Raumfahrt
2333 Views
Created with page4