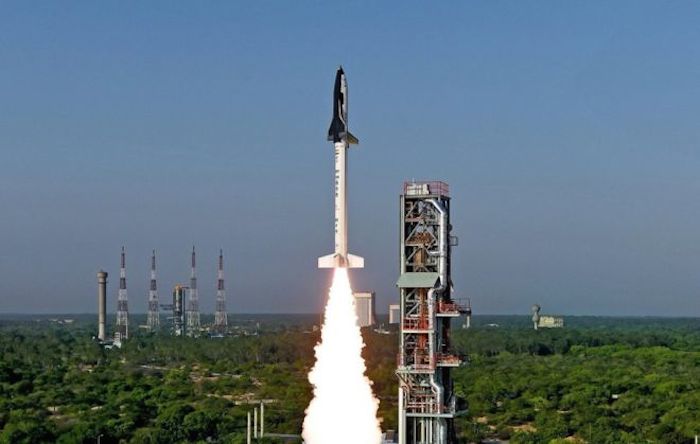 The next test of the Reusable Launch Vehicle Technology Demonstrator (RLV-TD) will be to land the aerospace vehicle in a runway when it returns from space, said K Sivan, Director of Vikram Sarabhai Space Centre of the Indian Space Research Organisation (ISRO).
On Monday, ISRO successfully tested the indigenously built winged-body aerospace vehicle, which when fully developed can be used multiple times to send satellites into orbit. At present, a rocket goes waste every time a satellite is launched, he told newspersons.
Next target
On return from space, the RLV-TD landed at the precise location in the sea, but got disintegrated. However, the next test is to fully get back the RLV-TD and make it land in a 5-km runway to be built at SHAR, Sriharikota, he said.
A large amount of data has been collected from RLV-TD, a project initiated in 2003. It will be analysed, and if fully satisfied, ISRO will go ahead with the next stage of testing, he said without giving a time frame.
There will be different levels of tests and demonstrations in the next 10-15 years, before a full fledged RLV is developed. For instance, the energy to be dissipated on re-entry is large resulting in extreme heat due to aero-dynamic drag experienced by RLV (1,800 k surface temperature). The re-entry module must land on a pre-designated landing site without disintegrating due to extreme decelerating loads.
The RLV would launch spacecraft, including satellites, into space and re-enter the earth’s atmosphere withstanding extreme pressure and heat conditions and land in an intended spot.
In future, there is going to be a huge demand for ISRO to launch satellites – around 60 in the next five years. This requires RLV, which can return to earth after inserting the payload in to the designated orbit and can be re-used with minor refurbishment. This will ensure fast turnaround time between launches, he said.
While the VSSC designed, conceptualised and tested the RLV-TD, which costs around ₹95 crore, some of the work, including fabrication, was done by private companies, he said.
The US and Russia have developed RLV while Japan has tested a portion of the RLV. The RLV-TD was only one-sixth the size of RLV, he said.
Expandable launch
ISRO’s focus has been mainly on expendable launch systems such as PSLV, GSLV, GSLV-Mk-III and hybrid launch system, which is partly re-usable like Space Shuttle. These systems are expensive to produce and incur high rates per launch.
Typically, the cost of transporting 1 kg of payload to space using expendable launch vehicle is $15,000-20,000. Of this, 80 per cent of the rocket cost is towards engines and structure. If the engines and the structure can be recovered and re-used, there could be a substantial reduction in cost to launch payloads in space, he said.
To break even, the RLV should be used 30-40 times. However, ‘our target’ is to use the RLV for nearly 100 times. We will then spend only 20 per of the present cost, which will be a substantial saving,” he said.
Quelle: THE HINDU
Raumfahrt
1942 Views
Created with page4