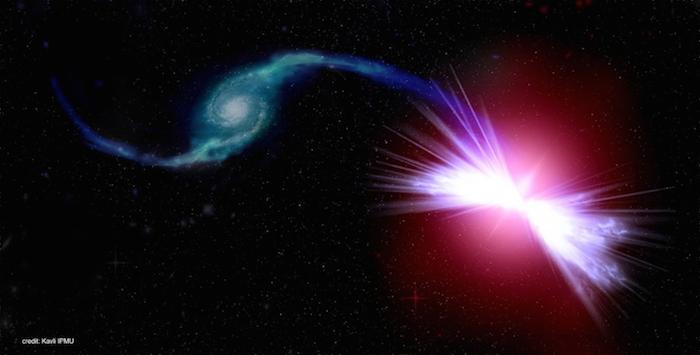 Akira's (right) gravity pulls Tetsuo's (left) gas into its central supermassive black hole, fueling winds that have the power to heat Akira's gas. Because of the action of the black hole winds, Tetsuo's donated gas is rendered inert, preventing a new cycle of star formation in Akira.
CREDIT: CREDIT: KAVLI IPMU
-
LEXINGTON, Ky. (May 26, 2016) - An international team of scientists, including the University of Kentucky's Renbin Yan, have uncovered a new class of galaxies, called "red geysers," with supermassive black hole winds so hot and energetic that stars can't form.
Over the last few billion years, a mysterious kind of "galactic warming" has caused many galaxies to change from a lively place where new stars formed every now and then to a quiet place devoid of fresh young stars. But the mechanism that produces this dramatic transformation and keeps galaxies quiet has been one of the biggest unsolved mysteries in galaxy evolution.
"These galaxies have the necessary ingredients for forming new stars but they are not doing it - why?" said Yan, an assistant professor of physics and astronomy at UK.
Researchers compare it to having deserts in densely clouded regions; rain and vegetation would be expected, not a barren landscape. Yan and astronomers from the Sloan Digital Sky Survey (SDSS) are solving the mystery in a study published today in Nature, announcing the discovery of the red geysers.
Red geysers are old galaxies hosting low-energy supermassive black holes which drive intense interstellar winds. These winds suppress star formation by heating up the ambient gas found in galaxies and preventing it from cooling and condensing into stars.
Yan, also the survey scientist for the survey called Mapping Nearby Galaxies at Apache Point Observatory (MaNGA), was working with the international team, including lead author Edmond Cheung of the University of Tokyo, to study hundreds of galaxies when they caught a supermassive black hole blasting away at the cold gas in its host galaxy.
"With MaNGA's technological upgrade to the Sloan Foundation Telescope, we can make detailed maps of galaxies ten to a hundred times faster than we could just ten years ago," Yan said.
Yan and his team at MaNGA are mapping the details of 10,000 nearby galaxies - the largest survey yet of its kind - with the goal to understand the galaxies' life cycles. Unlike previous SDSS surveys, they are not only mapping the centers of galaxies where supermassive black holes live, but the outer edges of the galaxies as well, which allowed them to discover the red geyser galaxy.
The winds powered by these supermassive black holes could come and go quickly. It is difficult to catch the moment they show up. "Since MaNGA studies so many galaxies, our snapshots can reveal even the quickest changes to galaxies," Yan said. "And that's how we found Akira."
"Akira," an example of a red geyser galaxy nicknamed by Cheung, has a companion galaxy that called "Tetsuo." Akira is pulling gas away from Tetsuo, which fuels Akira's supermassive black hole. The winds driven by the black hole are the reason that Akira is currently a red geyser galaxy.
Kevin Bundy, MaNGA principal investigator, came up with the name "red geyser" because these wind outbursts reminded him of the sporadic eruptions of a geyser and because failure to form new stars left the galaxy with only red stars.
As with global warming on Earth, galactic warming has long-term consequences for red geyser galaxies - their gas can no longer form new stars.
Quelle: AAAS
Astronomie
1999 Views
Created with page4