"A view of two-thirds of the entire sky with very high-energy gamma-rays observed by HAWC during 340 days of data taking between November 2014 and November 2015. Clearly visible are many sources in the Milky Way and the extragalactic objects Markarian 421 and 501. Several well-known constellations are shown as a reference."
Credit: HAWC collaboration
In a remote section of desert in southern Mexico, on the slopes of the dormant Sierra Negra volcano, lies a collection of 300 steel tanks, each the size of a small house. Together, they take up an area that's a little less than four football fields. In the otherwise uninhabited area, the glistening metal structures look like a futuristic city tried to take root there.
These metal tanks make up the High-Altitude Water Cherenkov Gamma-Ray Observatory, or HAWC for short, which is being used to map the sky in high-energy gamma-rays. The new map reveals a cosmic landscape that resembles the isolated desert where HAWC's detectors make their home, sparsely littered with sources of light.
The release of HAWC's first complete sky map last month effectively signified that HAWC is now a participating member of the observing community, and has already begun to perform one of its primary functions: alerting other telescopes when strange and sporadic bursts of gamma-rays appear in the sky. [Gamma-Ray Universe: Photos by NASA's Fermi Space Telescope]
. 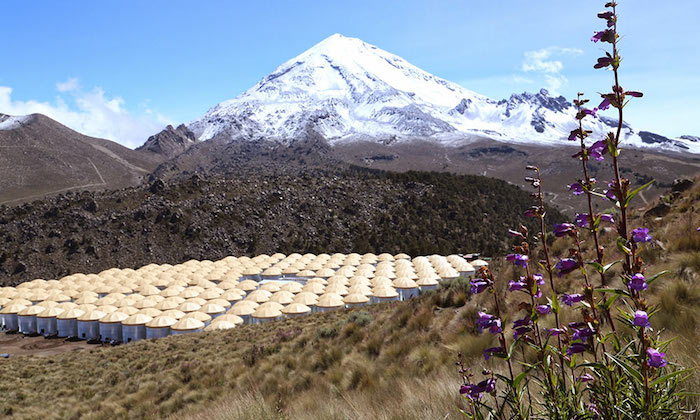 Water tanks for the HAWC detector with Picode Orizaba in the background.
Credit: Zig Hampel-Arias, HAWC/WIPAC
Earthlings who look up at the night sky see a background of blackness littered with millions of points of light, and the hazy band of the Milky Way.
HAWC's view of the sky is decidedly different. The map released by the collaboration in April shows a sky that is mostly dark; there are only about 40 distinct sources of light, and most of those line up along the plane of the Milky Way Galaxy, which looks bright in any wavelength, simply because of its proximity to the Earth.
The longer HAWC observes the sky, the more sources it will discover, but a high-energy, gamma-ray map of the sky will never look quite like the cosmic skyline that human eyes see. Compared to the number of stars that radiate visible light, there just aren't very many cosmic objects that emit the high-energy gamma-rays that HAWC detects.
But quantity isn't everything. The view of the sky in high-energy gamma-rays is part of the cosmic puzzle, and without it, humanity's view of the cosmos is incomplete.
Consider the different types of maps that can be made of a single city: there are those that show the location of roads, buildings, rivers and lakes; but there are also topological maps that show the rise and fall of the land, or geological maps that reveal the materials buried under the ground. Maps that show gas and power lines are essential for construction projects — even though they don't help people find their way to the grocery store. Different maps can show the same location in a different light.
Maps of the universe show the same location in, literally, different kinds of light — there are telescopes and observatories that have mapped the sky in just about every wavelength of light: radio, infrared, optical, microwave, X-ray and gamma-ray HAWC is not the first).
HAWC's map covers two-thirds of the night sky. (Because it is located on the ground, and not in space, part of its view is blocked by the Earth.) No other observatory has ever mapped such a large section of the sky in such high-energy gamma-rays, and over such a long period of time (which lets HAWC pick up fainter sources), said Brenda Dingus, the principal investigator for the U.S. Department of Energy for HAWC. Comparing the locations in HAWC's map with those same locations on maps of other wavelengths can reveal more about the objects that lurk there, and the processes going on there. These multiwavelength investigations can solve mysteries or create new ones.
Cosmic accelerators
. 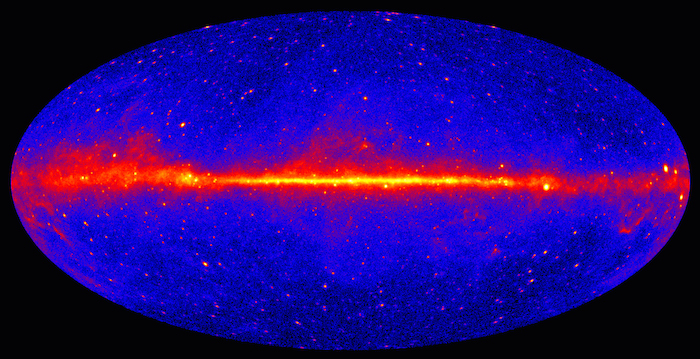 This view shows the entire sky in gamma-rays, based on five years of data from the LAT instrument on NASA's Fermi Gamma-ray Space Telescope. Brighter colors indicate brighter gamma-ray sources.
Credit: NASA/DOE/Fermi LAT Collaboration
Stars and most other objects in the universe radiate energy because they are hot, Dingus told Space.com. That thermal energy is responsible for most of the illumination in the universe. But gamma-rays don't form so easily.
"You can't just get something hot and make gamma-rays," Dingus said. "You actually have to have a particle accelerator."
One such cosmic accelerator is a supernova — a massive star that runs out of fuel, collapses under its own weight and explodes. As the stellar mass collapses, the in-falling material can bounce off the star's core, creating a shockwave that slams through nearby dust clouds like a wrecking ball. The dust particles get kicked so hard they spit out gamma-rays. While the initial explosion releases visible light and other wavelengths for a few days, the gamma-rays from the shockwave remain visible for centuries, allowing long-term study of the remains of the supernova. [Supernova Photos: Great Images of Star Explosions]
When a gamma-ray from a distant source collides with a particle in the Earth's atmosphere, it's like a particle piñata got cracked open: the energy from the collision creates a shower of new particles (including more gamma-rays). Those 300 massive steel tanks that make up the HAWC observatory don't look like most instruments that observe the cosmos; they bear no resemblance to a telescope. The tanks are full of purified water, and when those showers of particles speed through the H2O, they generate more light, which is picked up by detectors. Working backward, scientists can trace the path of the original particle.
HAWC isn't the only telescope that uses this approach to capture gamma-rays, but it is currently the only detector of this type surveying such a large portion of the sky. The Fermi Gamma-ray Space Telescope also surveys the sky in gamma-rays (using a different method), but the highest-energy light it collects is fifty times weaker than HAWC's maximum, and HAWC covers an energy range that's over 65 times larger than what Fermi covers.
Despite such a broad reach, HAWC's map effectively reveals a cosmic desert. Maps in other wavelengths — even the lower-energy gamma-ray maps from Fermi — are lush with light sources and diffuse glow. By comparison, the creators of these powerful gamma-rays sparsely populate the cosmic landscape. But quantity isn't everything.
New discoveries
. 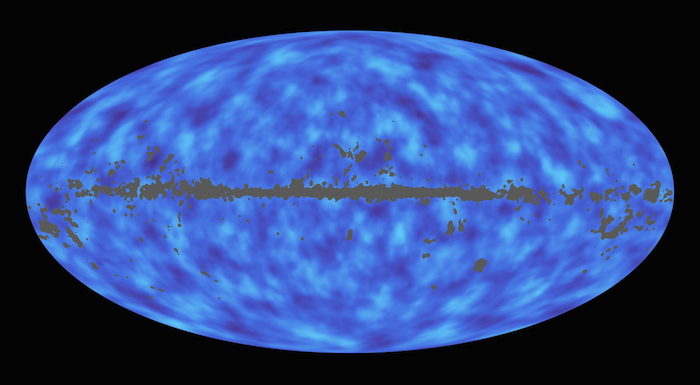 This full-sky map from the Planck mission shows matter between Earth and the edge of the observable universe. Each sky map of the universe can reveal different information about the same area. Image released March 21, 2013.
Credit: ESA/NASA/JPL-Caltech
Of the 40 high-energy gamma-ray sources seen in the HAWC map, about 25 percent have not been seen before in this wavelength range, said Michelle Hui, a researcher at NASA's Marshall Space Flight Center and a member of the HAWC collaboration. Hui spoke about the new HAWC map at The American Physical Society April Meeting, held this year in Salt Lake City. The meeting brings together scientists from the field of astrophysics, as well as from particle and nuclear physics, to discuss current trends and new results.
It's likely that some of the sources in the new HAWC map are associated with pulsars, another example of a cosmic particle accelerator, Hui said. Pulsars are the dense cores of material that are often left behind after a star explodes, and their incredibly strong magnetic fields and fierce spinning (up to hundreds of times per second) sometimes generate gamma-rays.
Many pulsars also emit radio waves — the least energetic form of light — all the way at the other end of the spectrum from gamma-rays. So HAWC scientists can consult a radio map of the sky, and see if their gamma-ray sources line up with a known pulsar.
"That will be our next step … to correlate with the other wavelengths to see exactly what is generating these high-energy photons," Hui said.
One of the most interesting revelations in the new map is a region nicknamed "the executioner," which has previously been spotted by other gamma-ray telescopes, Hui said. HAWC's map revealed that there might be three di
stinct sources in this bright spot, which could mean the discovery of a brand-new gamma-ray emitter. [NASA's Top 10 Gamma-Ray Sources in the Universe]
Alert!
. 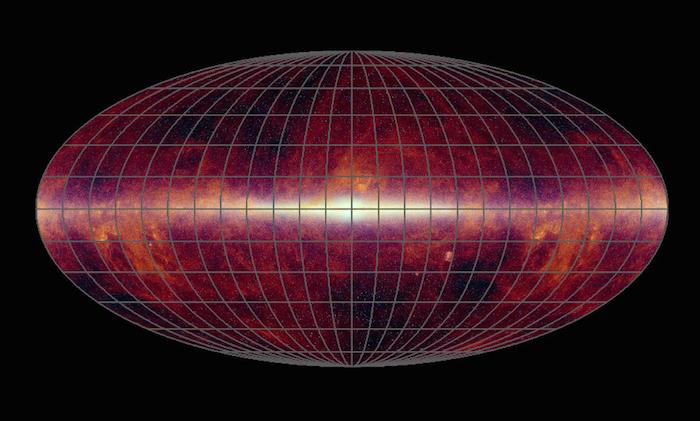 The universe seen in infrared light, captured by NASA's Wide-field Infrared Survey Explorer (WISE).
Credit: NASA/JPL-Caltech/UCLA
On April 6, 10 days before the start of the APS meeting, HAWC saw a known gamma-ray source rapidly brighten for about one day, and then nearly disappear again. The team sent out an astronomer's telegram, which is a community-wide alert that lets other telescope observatories know if a bright flash of light appears, or if something else strange is happening. The HAWC scientists still don't know what's causing the flare-up.
This is one of the primary roles that HAWC would like to serve, Dingus said — to be an alert system to let other telescopes know when an object releases a short-lived burst of gamma-rays. The Fermi telescope also performed this function in lower energies.
"We have other [observatories] that also look at this source daily … with the Fermi gamma-ray satellite in lower-energy gamma-rays, down to X-rays," Robert Lauer, a research assistant professor in physics and astronomy at the University of New Mexico and a member of the HAWC collaboration, said at the press conference. "And then we can compare all these measurements and see if we see the same type of fluctuation and learn much more about the processes and the source."
"You get a whole lot of new information by studying variability," Dingus told Space.com. "If you look at something and it stays the same all the time, you can make a theory about it. But then if it actually changes, that adds a lot more constraints to your theory."
Outside the room where the three scientists discussed these findings, another 20 HAWC members showed up just to cheer on their colleagues. The hallway buzzed with excitement — it felt more like a red carpet debut than a scientific announcement. But the release of the map is a major milestone for the experiment.
"This is our announcement that we work, and we work as advertised," Dingus told Space.com at the APS April Meeting. "This is the first map with the full detector. And it promises that the next five years are going to be really exciting."
Quelle: SC
Astronomie
2688 Views
Created with page4