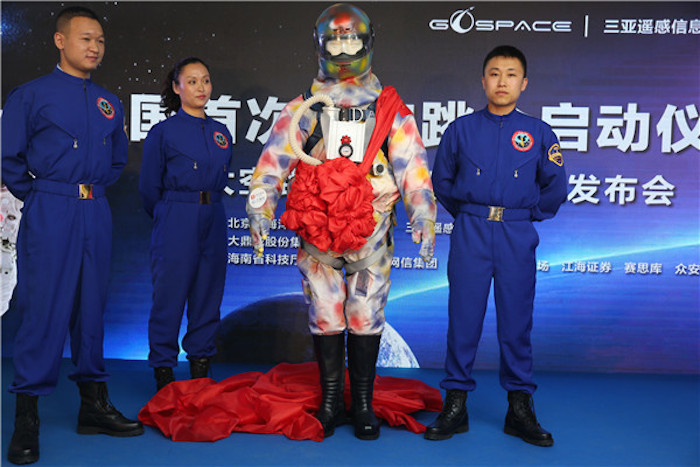 Professional parachutists Wang Desong, He Yufeng and Qi Yao (from left to right) unveil China's first ever space parachuting suit on May 19, 2016 in Beijing.
-
Traveling to space and returning to earth in a parachute will soon become available for the larger public in China. JHY Space Technology Co Ltd (Space Vision), a Beijing-based company, released China's first ever space parachuting suit on Thursday.
In the next few months, the high-tech company will test related equipment, and recruit more parachuting volunteers to train them.
The first three challengers are an entrepreneur, a champion woman parachutist and an aircraft engineer.
Challengers will soar into the stratosphere in a high-tech balloon, and return to the earth in a parachute. The especially customized suit has a radar, ground-based monitoring operations, space-ground communications and an image transmission system.
Jiang Fang, founder and president of Space Vision, said many technical experts have endorsed the feasibility of the commercial tour, and China's flight system technology for manned spacesuits is mature enough for such projects.
"We hope to lead the growth of the domestic commercial aerospace sector by starting with space parachuting, and gradually establish a path for the public to travel in the space," he said.
Jiang expects the space parachuting trip will cost around 500,000 yuan ($77,000).
The commercial space parachuting project will be launched in Sanya, Hainan province, where the tropical island has ocean and space resources, clean air and a space launch center.
Meanwhile, Hainan is starting its comprehensive space traveling industry.
By 2030, China hopes to become an aerospace power, thanks in part to the 13th Five-Year Plan (2016-20) to drive aerospace growth. Experts say that as government policy encourages it, demand for the brand new industry is increasing, and many other private aerospace companies are emerging.
"Participating in space exploration projects needs strict and professional training first," said Pang Zhihao, an aerospace scientist and deputy editor in chief of the monthly Space International magazine.
"Currently, as the United States has the most advanced technologies and management in commercial aerospace projects, we should use them as a benchmark," Pang said.
"Compared with national projects, commercial projects have a faster pace of R&D, lower management costs, and there could be relatively safe and economic solutions for public space travel."
Out of plenty of potential customers in China who have enough courage, physical strength, skills and wealth, professional parachutist He Yufeng would become the first woman space parachutist globally after her tryout.
"I want to challenge myself, and challenge the current world record of 41,419 meters, which was established by former Google executive Alan Eustace for space sky diving," she said.
Quelle: CHINADAILY
Raumfahrt
2057 Views
Created with page4