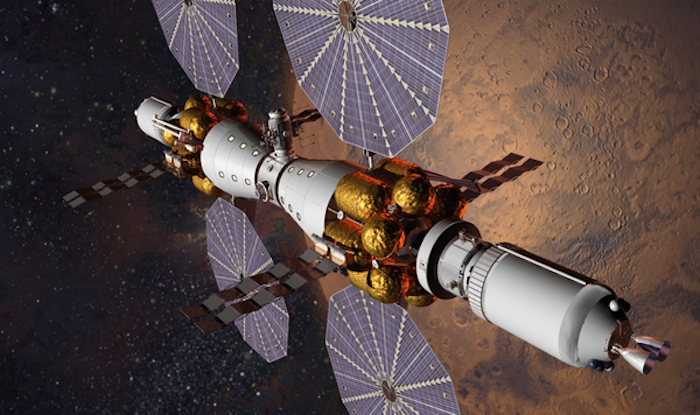 Lockheed Martin set to build orbiting Mars Base Camp by 2028
The lab would orbit the Red Planet with six astronauts onboard studying Mars in real-time in preparation for landing humans on its surface.
Defense and aerospace contractor Lockheed Martin today announced a proposal to establish a science laboratory that will orbit Mars starting in 2028. It will house six astronauts who will spend 10 to 11 months onboard, remotely driving robots, flying drones, and studying samples from the Red Planet in real time in anticipation of landing humans on its surface in the following decade.
"We will be able to accomplish more science in just a few months from Mars's orbit than we have in the previous 40 years," Tony Antonelli, former astronaut and now Lockheed's chief technologist for civil space exploration, told The Christian Science Monitor in a phone interview.
Though the company hasn't released technical details about its Mars Base Camp, or an estimate of how much it would cost, Mr. Antonelli said most of it would be assembled in cislunar space – between the Earth and moon – over a series of missions in the 2020s.It will rely on technologies that Lockheed is developing with NASA now, which should keep the project affordable says Antonelli. Lockheed is building the spacecraft Orion, a capsule that will one day shuttle astronauts to deep space for the first time. Orion's first unmanned test flight is scheduled for 2018, and then a manned one in 2021, both to be launched by NASA's new and powerful rocket called the Space Launch System.
These are big developments in space exploration, given that humans have not traveled beyond low-Earth orbit, or about 1,243 miles from here, since the last human landing on the moon in 1972, and that the agency has not focused on building vehicles for human spaceflight in decades.
But so far Mars Base Camp has not been publicly endorsed (or funded) by NASA, which Lockheed has been working with for decades. The base camp project promote a specific and incremental plan for sending explorers to the Red Planet, which many, including some in US Congress, think is missing from NASA's goals. This is how the United States tackled the moon through its Apollo program after all: send humans to moon's orbit first, then put feet on the surface.
"The orbit-first concept has the benefit of spreading out the cost and risk associated with landing on Mars on the very first attempt," said the Planetary Society, a nonprofit space advocacy that promotes an orbit-first plan to Mars, in its recent report on what it would take to get human explorers there.
The idea of starting in cislunar space, beyond the Earth-orbitting International Space Station, where much of the lab will be assembled before it's transferred closer to Mars, is to test equipment and astronaut tolerance before long duration missions. It's not as easy to travel back from cislunar space or from Mars in case of an emergency as it is from the space station, which is in low-Earth orbit and takes less than a day of travel. There would be six to nine months of travel to the Red Planet and the same for a trip back to Earth.
"They're on their own once they push out to cislunar space," says Antonelli of the astronauts who will venture to deep space, where communications from the ground will be delayed by at least 20 minutes. "But we are looking for some creative ways to do more," he says.
Quelle: CSM
Raumfahrt
1991 Views
Created with page4