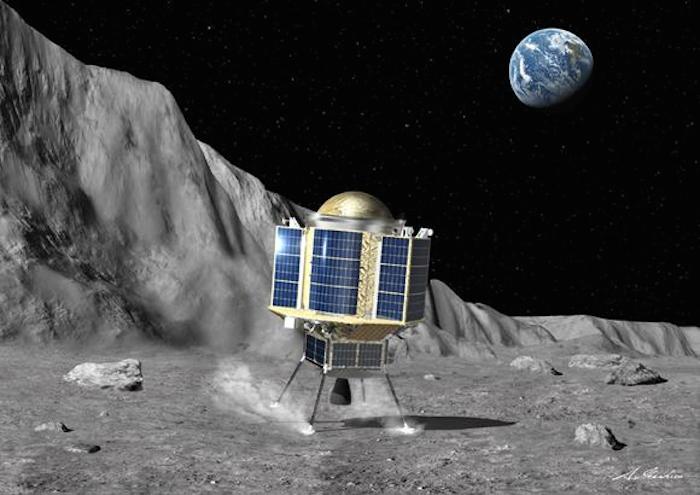 The probe will be designed to make a soft landing on the lunar surface.
-
TOKYO -- Mitsubishi Electric has been contracted to manufacture Japan's first lunar lander for launch as early as fiscal 2019, paving the way for future space exploration and development with more accurate landing technology.
The company will work with the Japan Aerospace Exploration Agency, or JAXA, as well as several Japanese universities on the 18 billion yen ($164 million) project. The spacecraft will be able to land within 100 meters of a designated point on the lunar surface, compared with the margin of error of 1km or more for existing devices developed abroad. The unmanned lander will weigh a relatively light 130kg or so and is not being designed to return to Earth.
An optical camera will capture the moon's surface so that craters can be identified in flight. Cross-checking this data with information gathered by a Japanese lunar orbiter launched in 2007, popularly known as the Kaguya, will let the lander accurately determine its position. The goal is to land inside a vertical shaft 60 meters in diameter that the orbiter has discovered.
Mitsubishi Electric has a sizable track record in space technology, including building the weather satellite known as the Himawari-7. It has constructed communications satellites for a Turkish company and in 2014 was contracted to build a similar system in Qatar. Mitsubishi Electric doubled in 2013 the capacity of its satellite production facility in the Yokohama-area city of Kamakura to eight units a year and is otherwise growing satellite operations. The company aims to lift sales from its space systems business by 50% from the fiscal 2015 level to 150 billion yen in fiscal 2020.
The lunar lander will launch from JAXA's Uchinoura Space Center in Kagoshima Prefecture using IHI's homegrown Epsilon rocket. Implementing and demonstrating the device's accurate landing technology will open up new opportunities for collaboration with foreign governments and other organizations in the space field.
Technology honed in the lunar mission will be used in a Mars probe that JAXA plans to launch as early as 2022. A solid technological base would also give Japan a greater say in international cooperation on a lunar base or a manned mission to Mars.
JAXA has worked with universities to carry out preliminary research on the lunar lander under the project name SLIM. The selection of a manufacturer will let the project fully commence. Japan could thus become the fourth country to pull off a soft lunar landing for an unmanned craft, following the U.S. and the Soviet Union in the 1960s and '70s and China in 2013. India is planning a similar mission.
JAXA landed its Hayabusa explorer on the asteroid Itokawa in 2005 and later got the spacecraft back to Earth. The new lunar probe will mark the agency's first attempt at a landing on a larger heavenly body.
Quelle: ASIAN REVIEW
Raumfahrt
2763 Views
Created with page4