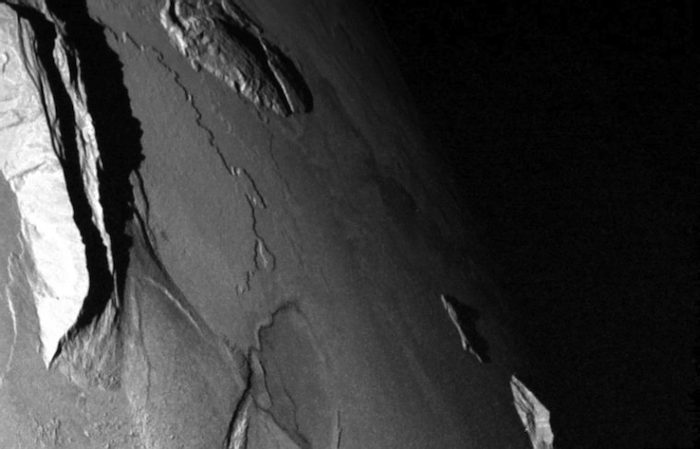 Mongibello Mons at sunset. The mountain rises 8.6 kilometers, or roughly 5 miles, above the volcanic plain. Io is home to some of the highest mountains in the solar system, including some that tower 10 miles high, far higher than any mountain on Earth. (Photo: NASA/JPL/University of Arizona)
-
Mountains aren’t the first thing that hit you when you look at images of Jupiter’s innermost moon, Io. But once you absorb the fact that the moon is slathered in sulfurous lava erupted from 400 active volcanoes, you might turn your attention to scattered bumps and lumps that turn out, on closer inspection, to be Io’s version of mountains.
There are about 100 of them, and they don’t look anything like the low lying volcanoes.
They also don’t look like mountains on our home world. While we favor majestic ranges stretching from horizon to horizon, the mountains on Io are isolated peaks of great height that jut up out of nowhere. From space, they look rather like the blocky chips in the fancier kind of chocolate chip cookie.
For planetary geophysicists like William McKinnon, professor of earth and planetary science in Arts & Sciences at Washington University in St. Louis, the mountains of Io are an intriguing puzzle. By what process consistent with everything that is known about Io could these bizarre mountains have formed?
. 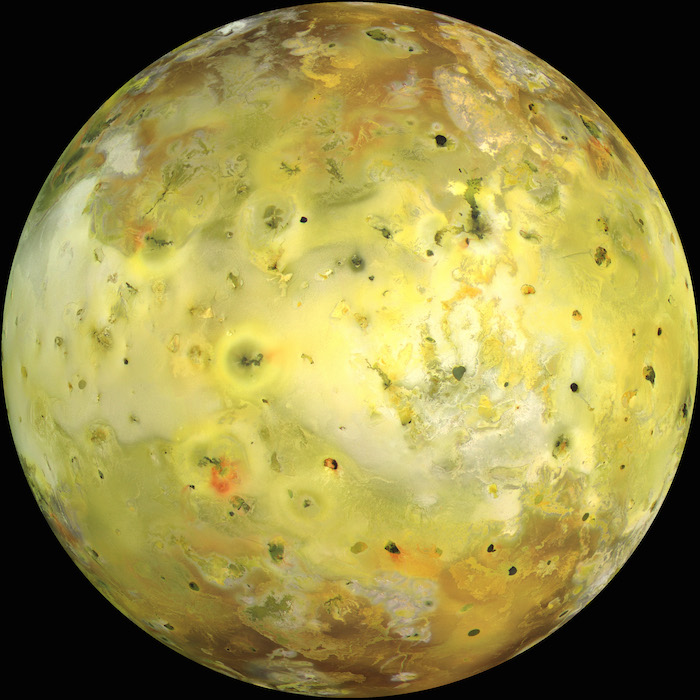 rue color image of Jupiter’s moon Io made by the Galileo spacecraft. Io has no identified impact craters because massive volcanic eruptions continually resurface it. (Photo: NASA/JPL/University of Arizona)
.
There are about 100 of them, and they don’t look anything like the low lying volcanoes.
They also don’t look like mountains on our home world. While we favor majestic ranges stretching from horizon to horizon, the mountains on Io are isolated peaks of great height that jut up out of nowhere. From space, they look rather like the blocky chips in the fancier kind of chocolate chip cookie.
For planetary geophysicists like William McKinnon, professor of earth and planetary science in Arts & Sciences at Washington University in St. Louis, the mountains of Io are an intriguing puzzle. By what process consistent with everything that is known about Io could these bizarre mountains have formed?
Since Io buries the evidence of its tectonic processes under a continually refreshed coating of lava (adding 5 inches a decade), the scientists have turned increasingly to computer simulations to solve the problem. In the May 16 online advance issue of Nature Geoscience, McKinnon and Michael T. Bland, a research space scientist at the USGS Astrogeology Science Center in Flagstaff, Ariz., publish a computer model that is able to make numerical mountains that look much like the jutting rock slabs on Io.
Putting the squeeze on
“The planetary community has thought for a while that Io’s mountains might be a function of the fact that it is continuously erupting lava over the entire sphere,” McKinnon said. “All that lava spewed on the surfaces pushes downward and, as it descends, there’s a space problem because Io is a sphere, so you end up with compressive forces that increase with depth.”
McKinnon and his former student, Paul Schenk, now at the Lunar and Planetary Institute in Houston, wrote a paper explaining this hypothesis in 2001.
The numerical experiment described in Nature Geoscience tests this hypothesis through simulation. “People have been squeezing planetary interiors forever to see what happens,” McKinnon said, “but we’re applying the squeeze differently, because on Io compression increases with depth; the surface is not in compression. We thought we could mimic this by beveling in the edges of a box, squeezing it as you might an accordion.
. 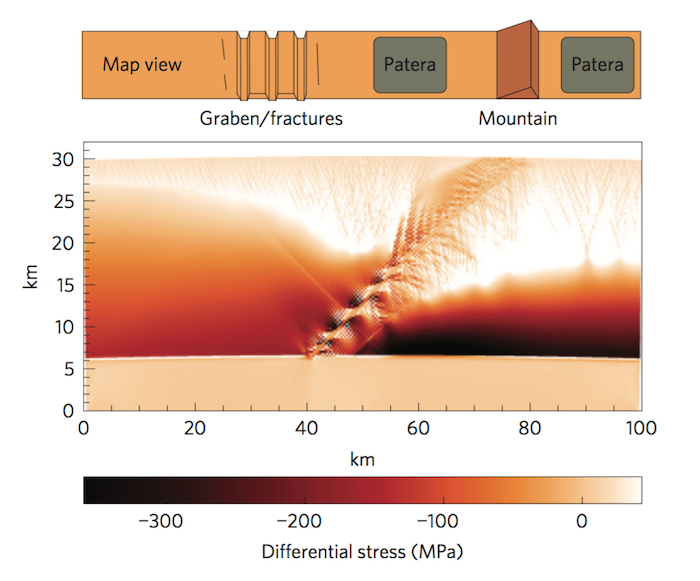 A thrust fault rips to the surface of a numerical Io. As it breaches the surface, it pulls on the overhanging crustal block (to the left of the fault), and “extensional” features such as trenches called graben form there. The fault also provides a conduit for rising magma and collapsing magma chambers form “patera,” or depressions on the surface. The stair-stepping is an artifact; the simulation divides the crust into small elements so that simpler (solvable) functions can be used to describe the rock mechanics. (Image: Bland and McKinnon)
-
The simulations show that the strain localizes to a single fracture, or fault, that starts deep in the lithosphere and rips through the rock all the way to the surface. When it breaches the surface, it actually overshoots, forming a scarp, or cliff, and stretching the surface of the overhanging block.
“It’s a neat demonstration of how things might actually work,” McKinnon said.
It might explain, for example, why there are often recent eruptions near mountains.
“The compressive forces deep in the crust are incredibly high,” Mckinnon said. “When these faults breach the surface, those forces are released, and the entire stress environment around the fault changes, providing a pathway for magma to erupt.”
The model might also explain why the mountains are associated with shallow, irregular depressions called patera. “When the stress environment changes,” McKinnon said, “a magma chamber can form at midlevel in the crust. When this magma surfaces along the fault, the crust above the chamber collapses, forming the patera.”
.

Hi’iaka Montes. The dark area at center of this “pull apart” mountain is a wide volcanic crater called a patera. (Photo: NASA/JPL)
.
The model of mountain building also explains some of the “extensional” tectonic features on Io, such as “pull apart” mountains. These are mountains that have split in two parts that have  shifted with respect to one another.
It might even explain a subtle feature of Io: the anti-correlation between mountains and volcanoes.
“If you look at a big map of Io,” McKinnon said, “there are concentrations of mountains and concentrations of volcanoes, and they kind of nest into one another. Even though mountains and volcanoes are often found together, if you look at all of the mountains and all of the volcanoes, they’re anti-correlated. It’s a peculiarity of Io.”
Why might this be? It’s not just the increasing weight of the overlying lava that puts the deep crust in compression McKinnon said, but also the increasing temperature. “Heating at depth causes the rocks to want to expand, and since there’s no room to expand, you again get compressive forces,” he said.
As long as the volcanoes are erupting, they carry this heat away and thermal stresses are low, reducing the likelihood of mountain formation. But if volcanism stops, the crust heats up, thermal stresses increase, and mountain formation becomes more likely.
Was Earth once like Io?
If all of this seems very alien, it is. “It’s a novel mountain-forming mechanism that we don’t see elsewhere in the solar system,” McKinnon said.
“But the same kind of thing could have happened on Earth, when it was very young and entirely covered by a shallow ocean,” McKinnon said.
“Because there was still lots of volcanism, mountains like those on Io might have burst through the ocean. They might have been the first emergent land on Earth,” McKinnon said.
So Io might be a time portal to the early Earth.
Quelle: Washington University in St. Louis
Astronomie
1991 Views
Created with page4