NASA to Provide Coverage of May 9 Mercury Transit of the Sun
NASA is inviting media and viewers around the world to see a relatively rare celestial event, with coverage of the Monday, May 9 transit of the sun by the planet Mercury. Media may view the event at NASA’s Goddard Space Flight Center in Greenbelt, Maryland.
Agency scientists will be available at the Goddard viewing event for live media interviews from 6 to 11:30 a.m. EDT. To attend, media must contact Michelle Handleman at michelle.z.handleman@nasa.gov. To schedule an interview with a NASA scientist at the event, contact Claire Saravia, claire.g.desaravia@nasa.gov.
Mercury passes between Earth and the sun only about 13 times a century, its last trek taking place in 2006. Due to its diminutive size, viewing this event safely requires a telescope or high-powered binoculars fitted with solar filters made of specially-coated glass or Mylar.
NASA is offering several avenues for the public to view the event without specialized and costly equipment, including images on NASA.gov, a one-hour NASA Television special, and social media coverage.
Mercury will appear as a small black dot as it crosses the edge of the sun and into view at 7:12 a.m. The planet will make a leisurely journey across the face of the sun, reaching mid-point at approximately 10:47 a.m., and exiting the golden disk at 2:42 p.m. The entire 7.5-hour path across the sun will be visible across the Eastern United States – with magnification and proper solar filters – while those in the West can observe the transit in progress after sunrise.
NASA also will stream a live program on NASA TV and the agency’s Facebook page from 10:30 to 11:30 a.m. -- an informal roundtable during which experts representing planetary, heliophysics and astrophysics will discuss the science behind the Mercury transit. Viewers can ask questions via Facebook and Twitter using #AskNASA.
Roundtable participants include:
Jim Green, planetary science director at NASA Headquarters in Washington
Lika Guhathakurta, heliophysics program scientist at NASA Headquarters
Nicky Fox, project scientist for the Solar Probe Plus mission at Johns Hopkins University Applied Physics Laboratory in Laurel, Maryland
Doug Hudgins, Exoplanet Exploration Program scientist at NASA Headquarters
To view a NASA ScienceCast video on the rare opportunity the Mercury transit poses for professional astronomers and backyard sky watchers alike, go to:
http://youtu.be/wbkrlHDKvgE
Images and animations for b-roll are available through NASA’s Scientific Visualization Studio at:
http://go.nasa.gov/1X51Duz
For fast facts about Mercury, and more information on the 2016 transit of the sun, visit:
http://www.nasa.gov/transit
Quelle: NASA

A transit of Mercury will take place on 9th May 2016 from 11:12 UTC (12:12 BST/13:12 CEST) and ending at 18:42 UTC (19:42 BST/20:42 CEST).  During the transit, Mercury will appear as a small dot, 150th the diameter of the Sun, crossing the surface of the solar disc.  This is a relatively a rare event: the next transit will take place on 11th November 2019 and there will not then be another transit until 2032.
The whole transit will be visible from most of western Europe, South America and eastern North America. There will be partial visibility everywhere else except Australia and far eastern Asia. For a map showing the areas where the transit is visible, see:
http://www.europlanet-eu.org/wp-content/uploads/2016/04/Mercury_Mapa_Exp_final.png
Viewing the Transit
Observing the Sun can be dangerous and can damage your eyes or cause blindness.  Don’t look at the Sun directly with the naked eye, even through sunglasses or a welder’s mask. The transit of Mercury is too small to see without magnification, so cannot be viewed through ‘eclipse glasses’.
The transit can be viewed through a telescope that has been properly fitted with a solar filter, or through a purpose-built solar projector.  For full details on how to observe the transit safely, see the British Astronomical Association’s page on Observing the Transit of Mercury: https://britastro.org/mercury2016
Online viewing
The European Space Agency (ESA) will web stream live images throughout the transit at: http://www.cosmos.esa.int/web/cesar/streaming
Live images will also be broadcast via a live Google Hangout, which will be on air throughout the transit. For details, see:
http://www.cosmos.esa.int/web/cesar/09-may-educational-event-hangout-
Events
Details of public observing events relating to the transit of Mercury can be found at http://www.cosmos.esa.int/web/bepicolombo-mercurytransit/locations
These can also be viewed on a map: https://www.google.com/maps/d/viewer?mid=zB5L6eC8SrrI.kvW2fPgvdBA0
Social Media
For live updates during the transit, follow the hashtag: #mercurytransit
Share your selfies from Transit of Mercury observing events with the hashtag: #MercuryTransitSelfie
Videos
Animation introducing the Transit of Mercury by Europlanet 2020 RI:
https://www.youtube.com/watch?v=JqFFJ6zdECw#t=12
The Open University’s “Discover Mercury” series of videos include how to view the transit of Mercury safely, as well as features on the science and geology of Mercury and the MESSENGER and BepiColombo missions.
http://www.open.edu/openlearn/discovermercury
Introduction to the transit of Mercury and how to view it safely by the Society for Popular Astronomy.
https://vimeo.com/161001352
Transit of Mercury Schools Challenge
The European Space Agency is challenging European school students to observe the transit and to recreate the measurements made by astronomers around 300 years ago in order to calculate the distance between the Earth and the Sun.
http://www.esa.int/Education/Teachers_Corner/Transit_of_Mercury_schools_challenge
About Mercury
Mercury is the smallest terrestrial planet, and the closest to the Sun. As Mercury is at one end of the planetary chain, we need to determine its nature and origin if we wish to understand our Solar System. It has a more eccentric (non-circular) orbit than any other planet, being 46 million kilometres from the Sun at the closest point in its orbit (perihelion) but 70 million kilometres away at its furthest point (aphelion). The planet rotates slowly, exactly three time for every two orbits round the Sun which (bizarrely) results in its day being twice as long as its year (see: http://www.open.edu/openlearn/mercuryday ). This slow rotation results in surface temperatures rising in excess of 400 °C in the daytime and dropping below -170 °C before dawn. However, because Mercury spins vertically on its axis, with no tilt relative to its orbit, the floors of some craters near the poles are in permanent shadow. This means that they are permanently cold and can shelter ice derived from comets impacting the surface.
Mercury is a dense planet, with an iron core that occupies a greater portion of its interior than in the case of the Earth. Mercury’s surface was formed almost entirely through volcanic processes. Most of its crust was formed by lava flows more than 3 billion years ago, and there are many volcanic vents where explosive volcanic eruptions have occurred. At least one of these is probably less than a billion years old.
Only two spacecraft have visited Mercury so far: NASA’s Mariner 10 made three flybys in 1974-5, and NASA’s MESSENGER orbited Mercury from March 2011 until April 2015. BepiColombo, a mission led by ESA in collaboration with the Japanese Space Agency (JAXA), is due to launch in in 2018 and to arrive in 2024.
Quelle: EUROPLANET
-
Coole Informationen zum Merkur-Transit gibt es auch hier: 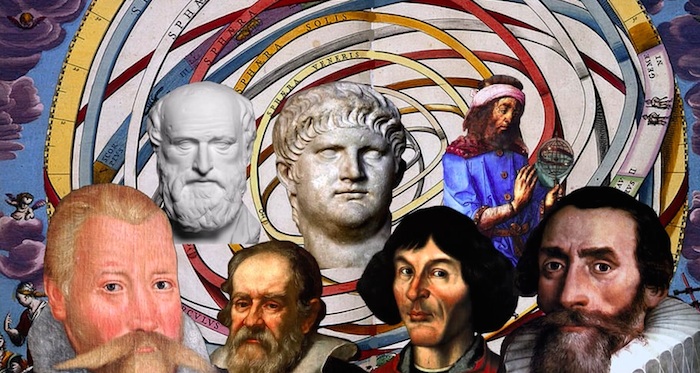 https://vimeo.com/163329453
-
Update: 7.05.2016
S&T Live Webcast: May 9th’s Transit of Mercury
When the innermost planet makes its slow-motion dash across the Sun's face on Monday, May 9th, you'll be able to watch as it happens if you connect with Sky & Telescope's live webcast of the event. You'll also learn how to view the Sun safely with your telescope — even if you don't have a solar filter.
Sky & Telescope has partnered with Dexter Southfield's Clay Center Observatory, along with other video feeds from around the U.S., to showcase the entire 7½-hour-long transit. Our exclusive webcast begins at 7:00 a.m. Eastern Daylight Time (11:00 Universal Time) and continues nonstop until 3:00 p.m. EDT (19:00 UT). Here's the link:
Sky & Telescope's Transit of Mercury Webcast
Sky & Telescope's Transit of Mercury webcast
Sky & Telescope
To enhance the experience, we've lined up one-on-one interviews with experts on the Sun and Mercury from around the country, including:
● Jay M. Pasachoff, solar researcher and director of Williams College's Hopkins Observatory
● Matthew Penn, associate astronomer at the U.S. National Solar Observatory
● William Sheehan, science historian and co-author of In Search Of Planet Vulcan
● Henry "Trae" Winter, solar physicist at the Harvard-Smithsonian Center for Astrophysics
Transits of Mercury are relatively rare — this is the planet's first since 2006. So don't miss it!
Quelle: Sky & Telescope
-
Update: 8.05.2016
.
Morgen ist #Merkurtransit! Öffentliche Beobachtung in #Hannover mit unseren Teleskopen 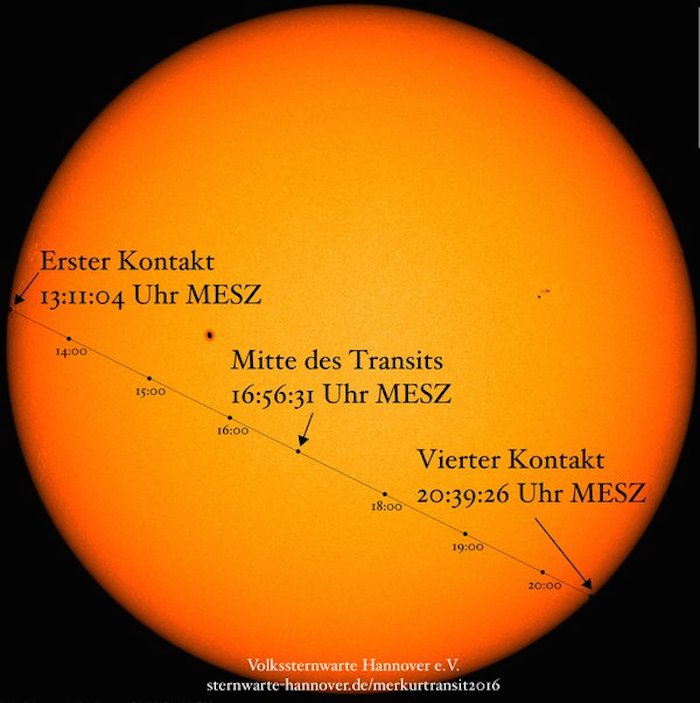 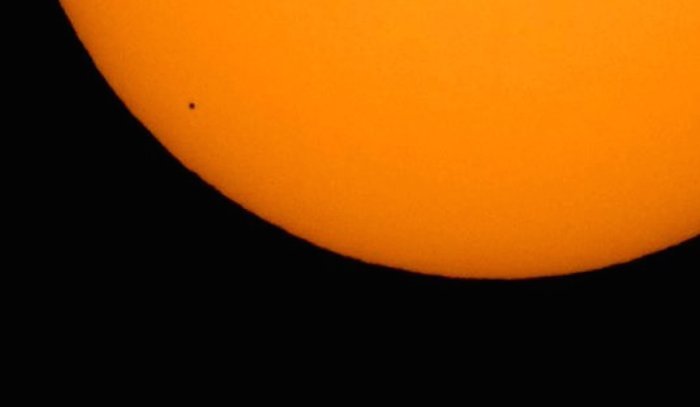