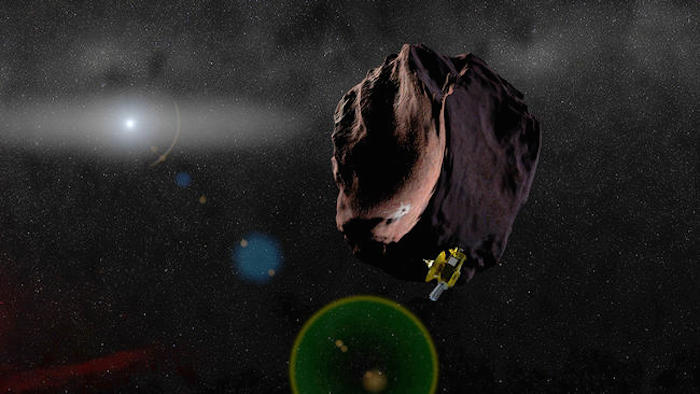 An artist's impression of NASA's New Horizons spacecraft encountering 2014 MU69, an object thought to be unchanged since the solar system formed 4.6 billion years ago. (NASA/Johns Hopkins University Ap / HANDOUT)
-
Scientists still are analyzing the images and observations of Pluto that the New Horizons mission captured in unprecedented detail last July, but they also are looking ahead to an even closer look at a space object with which they are even less familiar.
Known as 2014 MU69, the object is thought to be unchanged since the birth of the solar system 4.6 billion years ago. Scientists plan to use the same cameras and other instruments that showed the world a ruddy, textured Pluto to reveal more about the building blocks of the planets, the ripple effects of the sun's energy and the boundaries of space.
The team managing the mission at the Johns Hopkins Applied Physics Laboratory in Laurel submitted plans last month to NASA to fly past the relatively tiny chunk of icy matter on New Year's Day 2019. If NASA approves it, the extended New Horizon mission could give a close-up view of what has so far only appeared to scientists as a faint dot of light.
"There's no other way to see it," said Kenneth R. Sembach, director of Baltimore's Space Telescope Science Institute, which helped the Hopkins scientists find the object. "Even the largest and most powerful telescopes can't tell us about what those objects are like up close."
The object is in a 300-year orbit around the sun in the Kuiper Belt, a region of space beyond Neptune believed to contain small bodies made largely of ice.
Some of those bodies have been knocked into orbits that take them into the inner solar system (including the likes of Halley's Comet), and that exposure to the sun's heat means they aren't quite as they were billions of years ago. Others, like Pluto, are close enough to Neptune that the planet influences their orbits.
But 2014 MU69 is thought to be part of a third category of Kuiper Belt objects that has remained far from interactions with other bodies. It will be more than 43 times the distance between the Earth and the sun when New Horizons passes.
"These may be the most primitive objects in the solar system," said Hal Weaver, New Horizons project scientist at the Hopkins lab.
Though New Horizons isn't the first NASA mission to venture so far from Earth, technological advancements mean it will likely reveal new discoveries. NASA's Pioneer 10, Voyager 1 and Voyager 2 missions passed through the Kuiper Belt decades ago, but none made any close-up observations of objects.
New Horizons has two cameras on board to give a detailed view of 2014 MU69, which it will come four times closer to than the 7,700-mile distance from which it observed Pluto at its closest approach. That is in part because 2014 MU69 is much smaller — probably about 18 miles across, compared with 1,500-mile-wide Pluto.
"You have less real estate to deal with," Weaver said. "If you want to have hundreds of pixels across the surface and the body's only 30 kilometers across, you've got to get pretty close."
But perhaps more illuminating will be data captured by spectrographic instruments that observe radiation to show more about the composition and characteristics of the object. If 2014 MU69 is indeed an untouched remnant of the early solar system, that information could prove groundbreaking.
Other observations about the environment surrounding the object will be richer in detail than ever obtained. Both Voyager spacecrafts are still gathering data from a distance of more than 100 times the space between Earth and the sun, and there is some question whether they are seeing evidence of charged particles from the sun even in interstellar space.
"In the next few years, New Horizons is probably going to enable there to be some better understanding of that, and perhaps some paradigm shifts in how the solar system interacts with interstellar space," said Ralph McNutt, chief scientist in the space department at the Hopkins lab.
The Hopkins team transmitted a series of maneuvers to New Horizons last fall to start guiding the spacecraft toward 2014 MU69, in case the mission is approved. And if it is, more adjustments in its trajectory might be needed. The scientists also have proposed using the Hubble Space Telescope to gather more intelligence on the object, so they can best navigate and time the fly-by.
A panel of scientific experts convened by NASA will consider the extended mission proposal over the coming months. A decision is expected by fall, and the mission, if approved, would begin in 2017, said NASA spokeswoman Laurie Cantillo.
The panel will weigh the proposal "based on the value of the science New Horizons can perform at 2014 MU69 and the health of the spacecraft and its instrument payload, she said. The proposed mission would cost $80 million over five years, on top of the $700 million budget for New Horizons' primary mission.
The Hopkins scientists are optimistic.
The spacecraft is "still working beautifully," Weaver said. Its power source, a single radioisotope thermoelectric generator, is gradually losing power but is expected to last into the 2030s.
If NASA wanted to send another spacecraft to do the proposed observations, it would take a long time to catch up with New Horizons.
"It takes 30 years to put together one of these missions, and it takes 10 years to get out to this region of the solar system," Weaver said. "Nothing else could do this in the next 30 years and probably 50 years."
Quelle: THE BALTIMORE SUN
Raumfahrt
« Zum vorherigen Eintrag Zum nächsten Eintrag »
2037 Views
Created with page4