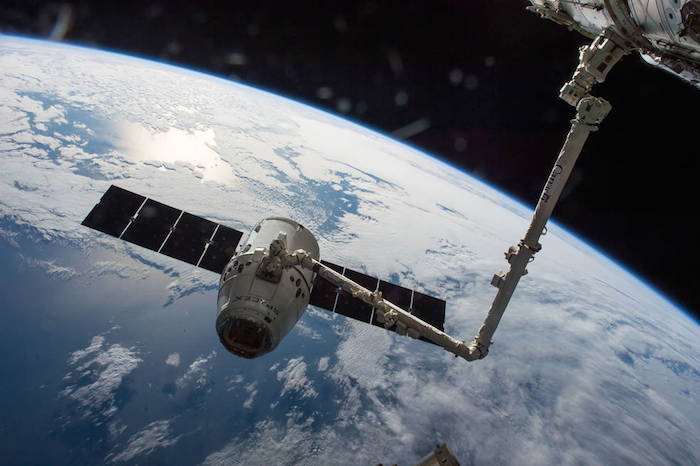 The SpaceX Dragon cargo spaceship is grappled by the International Space Station's Canadarm2. The spacecraft delivered about 7,000 pounds of science and research investigations on April 10, including the Bigelow Expandable Activity Module (BEAM).
Credits: NASA
-
After delivering almost 7,000 pounds of cargo to the International Space Station, including the Bigelow Expandable Activity Module (BEAM), the SpaceX Dragon cargo spacecraft is set to leave the orbital laboratory with valuable science research and return to Earth on Wednesday, May 11. NASA Television will provide live coverage of Dragon's departure beginning at 9 a.m. EDT.
The Dragon spacecraft, which arrived at the station April 10, will be detached from the Earth-facing side of the station's Harmony module using the Canadarm2 robotic arm, operated by ground controllers at NASA’s Johnson Space Center in Houston. Robotics controllers will maneuver Dragon into place and Expedition 47 robotic arm operator Tim Peake of ESA (European Space Agency) will execute the command for its 9:18 a.m. release.
Dragon will fire its thrusters three times to move to a safe distance from the station before being commanded to begin its deorbit burn about 2 p.m. The capsule will splash down in the Pacific Ocean about 2:55 p.m. The deorbit burn and splashdown will not be broadcast on NASA TV.
A recovery team will retrieve the capsule and its more than 3,700 pounds of return cargo, including samples from ongoing space station research, which ultimately will be shipped to laboratories for further study. This cargo includes samples from human research, biology and biotechnology studies, physical science investigations and education activities sponsored by NASA and the Center for the Advancement of Science in Space (CASIS), the nonprofit organization that manages research aboard the U.S. national laboratory portion of the space station. The spacecraft also will return the final batch of human research samples from the one-year crew mission.
In the event of adverse weather conditions in the Pacific, the backup departure and splashdown date is Saturday, May 14.
Dragon, the only space station resupply spacecraft able to return to Earth intact, launched April 8 on a SpaceX Falcon 9 rocket from Cape Canaveral Air Force Station in Florida, for the company’s eighth NASA-contracted commercial resupply mission to the station.
Quelle: NASA
Raumfahrt
« Zum vorherigen Eintrag Zum nächsten Eintrag »
2110 Views
Created with page4