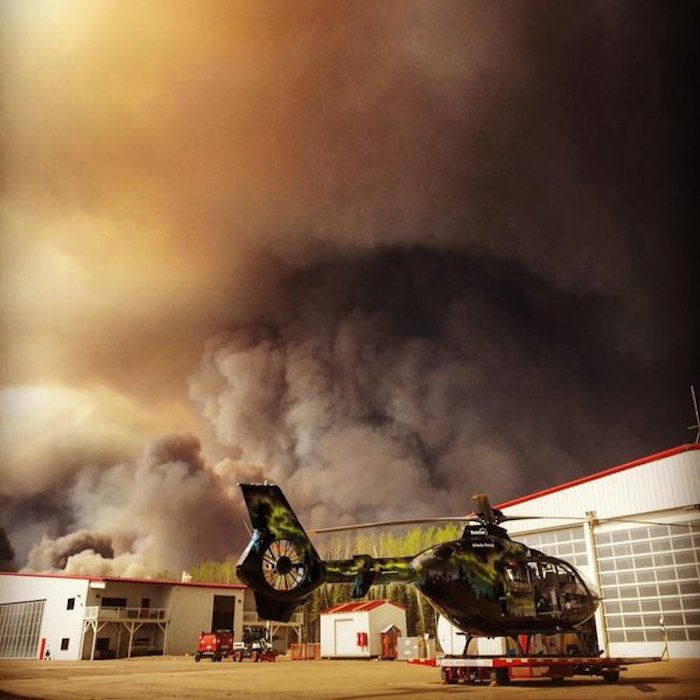 NASA-NOAA's Suomi National Polar-orbiting Partnership satellite (S-NPP) carries an instrument so sensitive to low light levels that it can detect wildfires in the middle of the night as well as during the daytime.
On May 5, 2016 at 0956 UTC (5:56 a.m. EDT), the Visible Infrared Imaging Radiometer Suite (VIIRS) on Suomi-NPP acquired a night-time image of the Fort McMurray wildfire by using its “day-night band” to sense the fire in the visible portion of the spectrum. In the image, the brightest parts of the fire appear white while smoke appears light gray.
. 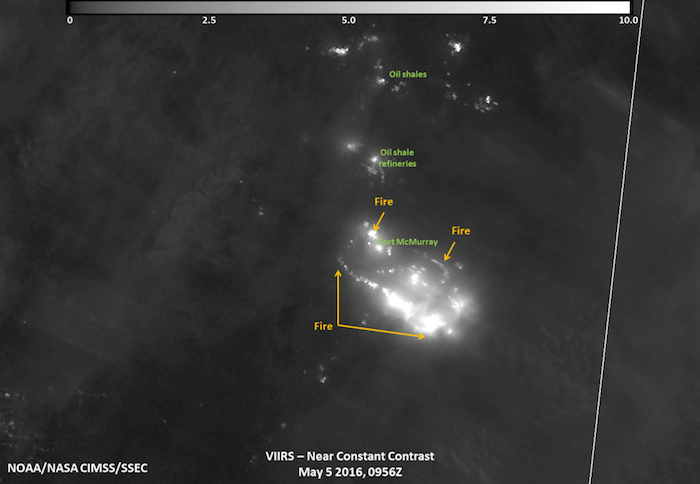 This night-time infrared view of the Fort McMurray Wildfire in Alberta Canada was captured by the VIIRS instrument aboard NASA-NOAA's Suomi NPP satellite on May 5, 2016 at 0956 UTC (5:56 a.m. EDT).
Credits: UWM/SSEC/CIMSS, William Straka III
NPP's VIIRS instrument captured a look at the fire and the smoke generated by the fire during the daytime on May 4, 2016 at 20:05 UTC 4:05 p.m. EDT. In the image the hotspots indicate the location of the fires. The smoke was blown south-southeast of the fires in Fort McMurray.
Fort McMurray wildfire in the province of Alberta, Canada has now forced more than 88,000 people to flee the city of Fort McMurray as it spread overnight. More than 1,600 homes and buildings have been destroyed by the blaze and more than 18,500 acres have already been scorched.
According to the Alberta Department of Agriculture and Forestry (ADAF) on May 5, the following communities are under an evacuation order:  Fort McMurray and Mackenzie County: Rural residents south of High Level. On May 5, 10:30 a.m. EDT (8:30 a.m. MDT local time) ADAF reported that North Abasand is now on fire. The radio/cell tower is under threat. Significant damage sustained to Prospect area. Fire crews prevented it from crossing Confederation Way. Serious damage was reported to the Old Airport Road structures. New airport facility not damaged. Fire Hall 5 has no significant damage. No reported new damage Downtown or in Thickwood, and the status of Saprae Creek and Anzac is unknown. For more details, visit the ADAF page: http://wildfire.alberta.ca/.
- 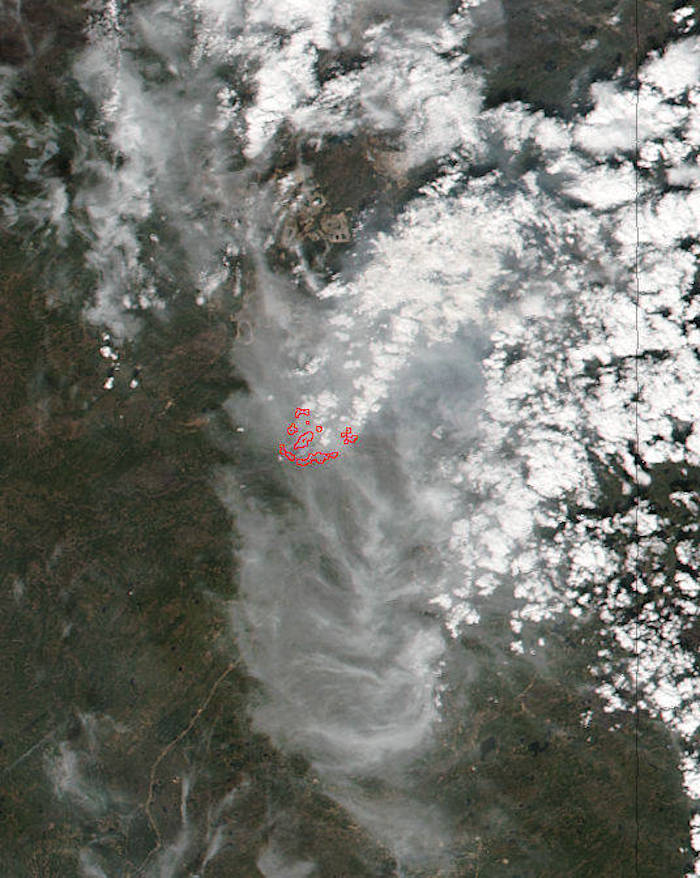 This daytime view of the Fort McMurray Wildfire in Alberta Canada was captured by the VIIRS instrument aboard NASA-NOAA's Suomi NPP satellite on May 4, 2016 at 20:05 UTC 4:05 p.m. EDT. Hotspots, indicating fires are outlined in red.
Credits: NASA MODIS Rapid Response, Jeff Schmaltz
The entire province of Alberta was under a state of emergency early on May 5, 2016 as crews battled flames headed towards more houses. The high winds in the area have only exacerbated the spread of the fire which is currently moving southward. For an audio briefing from Alberta's Regional Municipality of Wood Buffalo (RMWB) on May 4 at 6 p.m. MDT, visit: https://youtu.be/gW9S_boSyNg. For updates from RMWB, visit: http://asset.rmwb.ca/wildfire/
The Government of Alberta declared the following states of emergency:  Provincial State of Emergency on May 4; Athabasca Chipewyan First Nation on May 3; and the Regional Municipality of Wood Buffalo on May 1. Agreements have been signed with the Canadian Forces to assist with air support and transportation as needed. For emergency information: http://www.alberta.ca/emergency.cfm
The track of the fire split the area in two forcing 10,000 residents to move northward and 70,000 southward causing massive traffic delays.  The skies have turned blood-red from the smoke particles in the air which filter out colors other than red, pink and orange. Ash from the fire continues to rain down on the cars as they slowly make their way out of the area.  The evacuation is the largest in Alberta's history.
The Government of Alberta supports smoke forecasts from wildland fires using the BlueSky Canada system. The on-line animation shows forecasts of hourly ground-level concentrations of smoke particles (PM 2.5) from wildfires up to 48 hours into the future. For a Canada Smoke Forecast from Canada's fire page, visit: http://firesmoke.ca/forecasts/BSC18CA12/current/
NASA-NOAA's Suomi NPP satellite is the first satellite mission to address the challenge of acquiring a wide range of land, ocean, and atmospheric measurements for Earth system science while simultaneously preparing to address operational requirements for weather forecasting. Suomi NPP also represents the gateway to the creation of a U.S. climate monitoring system, collecting both climate and operational weather data and continuing key data records that are critical for global change science.
Quelle: NASA
Raumfahrt
« Zum vorherigen Eintrag Zum nächsten Eintrag »
2329 Views
Created with page4