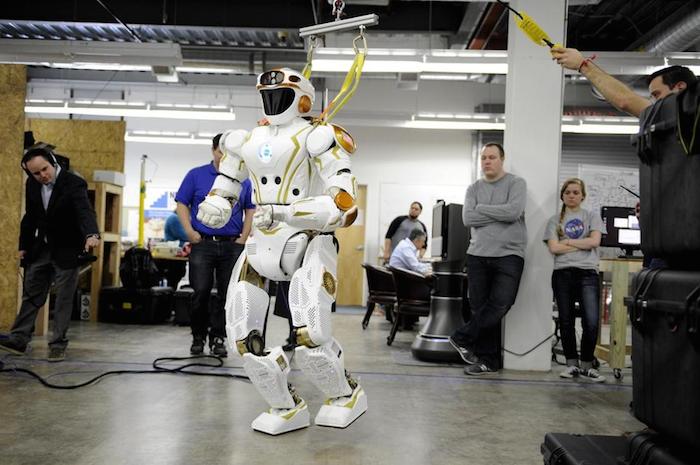 ASTRONAUTS SPEND YEARS training before they go into space. The same is true for their robot counterparts, two of which recently arrived in Massachusetts to be put through their paces in preparation for a long-off mission to Mars.
Valkyrie is built like a linebacker — 6’2” tall and 275 pounds. Its job is to go to Mars and maintain equipment in anticipation of the arrival of astronauts, potentially years after Valkyrie first touches down on the Red Planet.
“If you don’t start your car for two years, do you expect it will start when you return?” says Taskin Padir, a professor of engineering at Northeastern University who will be leading the university’s work with Valkyrie. “Humanoid robots will be part of the pre-deployment mission to Mars and will maintain equipment prior to the astronauts’ arrival.”
A manned mission to Mars is a high priority for NASA, which hopes to achieve the feat by the 2030s. As conceived, the expedition would require NASA to send equipment like rovers and a human habitat to Mars years before the astronauts launch. This is due to the relative orbits of Earth and Mars, which make it only practical to launch from here to there every two years.
“You need to pre-position assets like a habitat, a power supply. Whatever you need on the surface, all that’s done years before an astronaut gets there,” says William Verdeyen, NASA project manager for Valkyrie.
Valkyrie’s destination may be exotic, but the robot’s tasks will be mundane. The Johnson Space Center in Houston will beam instructions to Mars (the transmission takes about 20 minutes), and the robot will carry them out autonomously. Likely jobs include repairing electronic boards, cutting cords, and changing batteries — all maneuvers that require dexterity, which is complicated to engineer.
“A [good] analogy is replacing batteries in a flashlight,” says Padir. “If we can do that with Valkyrie at the end of two years, that would be a great accomplishment from our perspective.”
Over the next two years, the Northeastern team will work on improving Valkyrie’s performance, especially at these kinds of fine-motor maintenance tasks. A separate team at MIT will be doing similar work with another copy of the robot.
Most of Valkyrie’s movements will take place inside the human habitat — a known environment for the engineers, which makes it relatively easy to navigate. Sometimes, though, the robot will have to venture outside, like to brush dust off of solar panels. There, things get more treacherous. And if Valkyrie falls on the rough, uneven Martian surface, there’s always the risk it will never be able to get back up. Fortunately, though, in all these tasks, time is going to be on Valkyrie’s side.
“This robot will have a lot of free time on Mars,” says Padir. “If your task is to clean a few solar panels in the next week, you don’t have to run.”
Quelle: Bostonglobe
Raumfahrt
« Zum vorherigen Eintrag Zum nächsten Eintrag »
2248 Views
Created with page4