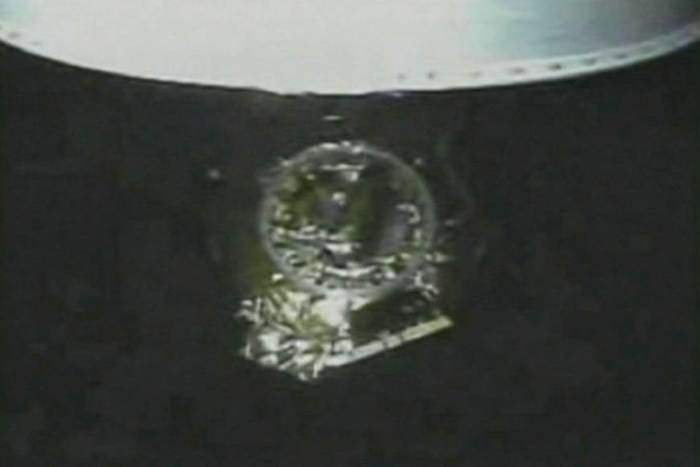 Do not let broken-up observation satellite Hitomi become space debris
-
A Japanese observation satellite has regrettably broken up into pieces. This is a serious incident.
The X-ray astronomy satellite Hitomi was found to have broken up into 11 pieces at an altitude of about 580 kilometers.
Launched by the Japan Aerospace Exploration Agency in February, the satellite had been engaged in an operational check prior to the start of full-scale observations. The main body of the orbiter was confirmed to be rotating abnormally after it lost normal communications with the JAXA control center on March 26.
Hitomi became unable to assess its attitude due to the erroneous operation of its attitude control system. This is believed to be the cause of the incident. Thrusters were automatically activated to try to stop the rolling, but the satellite’s rotation speed accelerated because the thruster control parameters were set wrongly in the first place.
The centrifugal force caused by the rotation is presumed to have torn off observation equipment and some of the solar cells from the satellite.
It is a matter of concern that the malfunction occurred in the attitude control system, which is a basic component of the satellite. JAXA said it had inspected the parameters before they were transmitted to the satellite. But it was found that the check had not been conducted adequately. The cause of the incident must be investigated as a matter of urgency.
X-rays are a form of electromagnetic radiation discharged by extremely high-temperature substances. Analysis of their wavelength and wave strength makes it possible to unravel such mysteries of the universe as black holes, neutron stars and dark matter. X-rays must be observed in space because their absorption by the atmosphere prevents them from reaching Earth.
A great blow to JAXA
X-ray astronomy is said to be Japan’s forte. The nation has launched a total of five X-ray astronomy satellites since the first one — Hakucho — was launched in 1979 to make spectacular achievements globally in such fields as observation of mammoth black holes.
But there has been a series of rocket-launch failures and problems with observation equipment. The latest incident deals a great blow to JAXA, which has had a series of troubles in other projects.
Hitomi is one of the nation’s largest scientific satellites. Equipped with six kinds of telescopes and X-ray detectors, the satellite was developed jointly by JAXA and the U.S. National Aeronautics and Space Administration, with the participation of many research institutes including universities and other organizations both at home and abroad. Japan invested ¥31 billion in the project.
Hitomi was expected to serve as an “open astronomical observatory” and was meant to be available for use by other countries. It is worrying that the incident may damage the confidence of other countries in Japanese satellite operations.
The incident is also having a significant international impact. Three X-ray astronomy satellites of the United States and Europe are currently in operation, but it is difficult for them to substitute for Hitomi. Although Europe is planning a new X-ray astronomy satellite, its launch is more than a decade away.
The recovery of Hitomi’s functions is said to be difficult to achieve. Even so, we want JAXA to try all possible means to achieve this end. JAXA must determine whether there is no danger that other observation satellites will experience similar trouble.
Quelle: The Japan News
-
Update: 29.04.2016
. 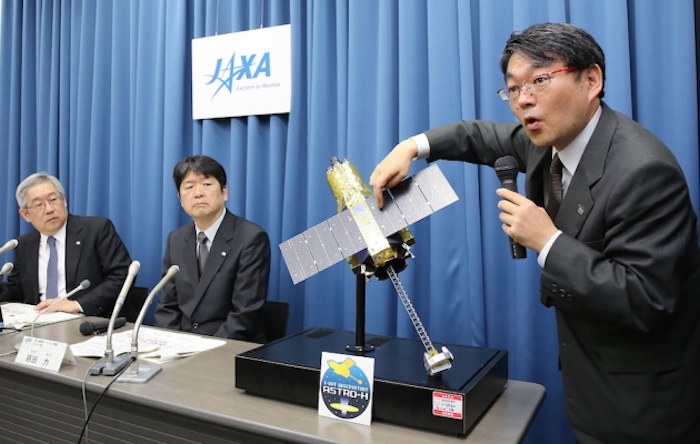 The Japan Aerospace Exploration Agency is investigating the factors that led to Hitomi's demise.
Japan’s flagship astronomical satellite Hitomi, which launched successfully on 17 February but tumbled out of control five weeks later, may have been doomed by a basic engineering error. Confused about how it was oriented in space and trying to stop itself from spinning, Hitomi's control system apparently commanded a thruster jet to fire in the wrong direction — accelerating, rather than slowing, the craft's rotation.
On 28 April, the Japan Aerospace Exploration Agency (JAXA) declared the satellite, on which it had spent ¥31 billion (US$286 million), lost. At least ten pieces — including both solar-array paddles that had provided electrical power — broke off the satellite’s main body.
Hitomi had been seen as the future of X-ray astronomy. “It’s a scientific tragedy,” says Richard Mushotzky, an astronomer at the University of Maryland in College Park.
The satellite managed to make one crucial astronomical observation before the accident, capturing gas motions in a galaxy cluster in the constellation Perseus. The instrument that made the observation, a high-resolution spectrometer, had been in the works for three decades. Two earlier versions of it were lost in previous spacecraft failures.
Hitomi’s troubles began in the weeks after launch, with its 'star tracker' system, which is one of several systems on board that are designed to keep the satellite oriented in space. The star tracker experienced glitches whenever it passed over the eastern coast of South America, through a region known as the South Atlantic Anomaly. Here, the belts of radiation that envelop Earth dip relatively low in the atmosphere, exposing satellites to extra doses of energetic particles.
By itself that should not have been a fatal problem. But the star tracker issue kicked off a series of cascading failures.
Spin cycle
At 3:01 a.m. Japan time on 26 March, the spacecraft began a preprogrammed manoeuvre to swivel from looking at the Crab Nebula to the galaxy Markarian 205. Somewhere along the way, the problems with the star tracker caused Hitomi to rely instead on another method, a set of gyroscopes, to calculate its orientation in space. But those gyroscopes were reporting, erroneously, that the spacecraft was rotating at a rate of about 20 degrees each hour. Tiny motors known as reaction wheels began to turn to counteract the supposed rotation.
Once the reaction wheels reached their maximum spin, a magnetic rod would normally deploy to keep them from accelerating out of control. But the magnetic rod must be oriented properly in three dimensions to work, and so it failed to slow the reaction wheels. Hitomi spun faster and faster.
The spacecraft then automatically switched into a safe mode and, at about 4:10 a.m., fired thrusters to try to stop the rotation. But because the wrong command had been uploaded, the firing caused the spacecraft to accelerate further. (The improper command had been uploaded to the satellite weeks earlier without proper testing; JAXA says that it is investigating what happened.)
All this took place when Hitomi was on the other side of the Earth from Japan and unable to communicate with its controllers in real time.
In the United States, team scientists went to bed on Friday, 25 March, having celebrated what looked like a successful start to the mission. Saturday morning, they woke up to a terse email from the project manager, Tadayuki Takahashi, saying that the spacecraft had been in an emergency.
Ground-based telescopes have since taken pictures of Hitomi spinning roughly once every 5.2 seconds.
Lost opportunities
Dan McCammon, an astronomer at the University of Wisconsin–Madison, helped to design and build Hitomi’s premiere scientific instrument, an X-ray calorimeter that measures the energy of X-ray photons with exquisite precision. He has been working on the technology for more than three decades, flying versions of it on the ASTRO-E mission, which failed on launch in 2000, and the Suzaku spacecraft, in which a helium leak rendered the instrument useless weeks after its 2005 launch.
McCammon says that it would take about US$50 million from NASA, and another 3–5 years, to build a replacement calorimeter. A version of it is slated to fly on the European Space Agency’s Athena mission, but that is not due to launch until 2028.
The calorimeter is the biggest loss, says Makoto Tashiro, an astrophysicist at Saitama University in Japan. It was to have gathered extraordinary detail on exploded stars, galaxy clusters, the gas between the galaxies and more. “We lose the new science,” he says.
But Hitomi could still contribute to science. Because of the early failure with Suzaku, Hitomi scientists planned one important early observation. About eight days after launch, Hitomi turned its X-ray gaze on the Perseus cluster, about 250 million light years from Earth. By measuring the speed of gas flowing from the cluster, Hitomi can reveal how the mass of galaxy clusters changes over time as stars are born and die — a test of the crucial cosmological parameter known as dark energy.
That one observation may yield a set of Hitomi papers, says Mushotzky. But no more.
“We had three days,” he says. “We’d hoped for ten years.”
Quelle: Nature
Raumfahrt
« Zum vorherigen Eintrag Zum nächsten Eintrag »
2351 Views
Created with page4