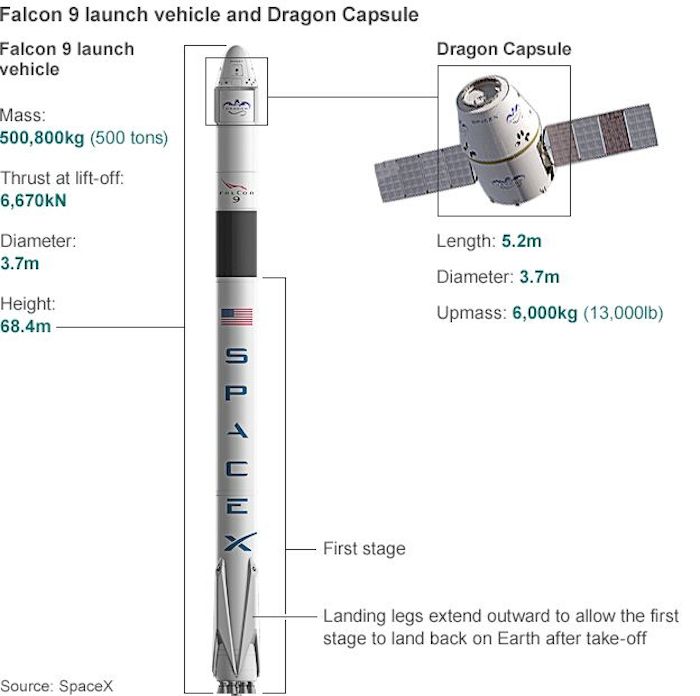 Billionaire Elon Musk is planning to send his Dragon spacecraft to Mars as early as 2018.
Mr Musk has long targeted a trip to Mars and has previously said he can get humans to the red planet by 2026.
His company, SpaceX, is planning "Red Dragon" missions to Mars to test technology for bigger missions.
In a tweet, Mr Musk said that its Dragon 2 spacecraft is "designed to be able to land anywhere in the solar system".
But Mr Musk "wouldn't recommend transporting astronauts beyond Earth-moon region" as the internal area of the spacecraft is only the size of a large car.
"Wouldn't be fun for longer journeys," he said in a tweet.
SpaceX has been developing rockets and has a $1.6bn (£1.08bn) contract with Nasa to supply the International Space Station.
On Wednesday it won an $83m contract from the US Air Force to launch a satellite for GPS navigation services.
It is a significant win for the company as, for the last decade, Lockheed Martin and Boeing have been supplying space launches for the military.
Last December SpaceX had another breakthrough, landing its Falcon-9 unmanned rocket upright.
That was an important development in its plan to cut the cost of space launches by re-using rockets.
Quelle: BBC
- 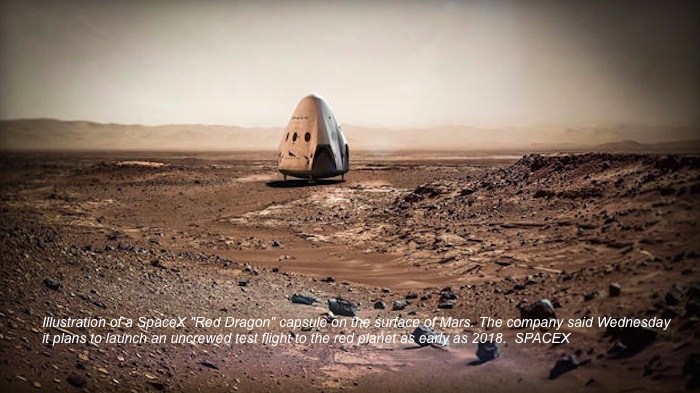 SpaceX plans to launch an upgraded Dragon capsule on an unpiloted test flight to Mars as early as 2018, the company announced Wednesday. NASA will provide "technical support," the agency said in a statement, in exchange for "valuable" entry, descent and landing data.
Using a powerful, as-yet-untried Falcon 9 heavy-lift booster, the "Red Dragon" spacecraft, a variant of the crew ferry craft SpaceX is developing to carry astronauts to and from the International Space Station, presumably would land on the red planet using eight Super Draco engines.
The engines are designed to help a station-bound crew escape a malfunctioning booster during the climb to space or to descend to a powered landing back on Earth at the end of a mission.
"Planning to send Dragon to Mars as soon as 2018," SpaceX said in a company tweet. "Red Dragons will inform overall Mars architecture, details to come."
SpaceX founder and CEO Elon Musk has long supported the eventual colonization of Mars and has made no secret of his plans to eventually send spacecraft to Earth's neighbor. Wednesday's announcement marked the first time the company has said when the first attempt might be made.
Musk did not immediately provide any details about the proposed unpiloted test flight, but tweeted Wednesday that "Dragon 2 is designed to be able to land anywhere in the solar system. Red Dragon Mars mission is the first test flight."
- 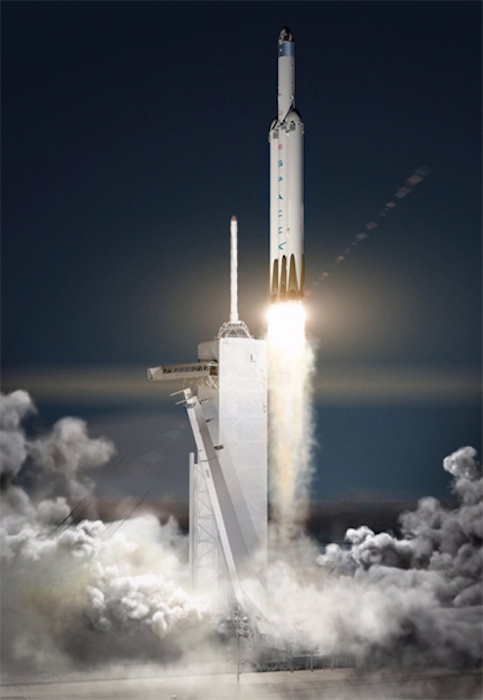 A SpaceX Falcon 9 "Heavy" rocket blasts off on a mission to boost an uncrewed Dragon capsule to Mars. SpaceX hopes to launch an initial test flight as early as 2018. SPACEX
-
He then added: "But wouldn't recommend transporting astronauts beyond Earth-moon region. Wouldn't be fun for longer journeys. Internal volume (about the) size of SUV."
A NASA spokesman at agency headquarters in Washington said NASA plans to provide "technical assistance in exchange for data." No money will change hands.
"Building on an existing no-funds-exchanged collaboration with SpaceX, NASA will provide technical support for the firm's plan to attempt to land an uncrewed Dragon 2 spacecraft on Mars," NASA said in a statement.
"This collaboration could provide valuable entry, descent and landing data to NASA for our journey to Mars, while providing support to American industry. We have similar agreements with dozens of U.S. commercial, government and non-profit partners."
NASA technical support would include deep space communications and telemetry; navigation and trajectory design; entry, descent and landing system engineering support; Mars aero-thermal entry data; general advice; and consultation on planetary protection protocols.
In exchange, SpaceX will provide detailed, non-proprietary flight data, imagery and science data to NASA.
"We're particularly excited about an upcoming SpaceX project that would build upon a current 'no-exchange-of-funds' agreement we have with the company," Dava Newman, NASA's deputy administrator, wrote in a blog post. "In exchange for martian entry, descent and landing data from SpaceX, NASA will offer technical support for the firm's plan to attempt to land an uncrewed Dragon 2 spacecraft on Mars."
"As the saying goes, 'spaceflight is hard,'" she wrote. "Sending astronauts to Mars, which will be one of the greatest feats of human innovation in the history of civilization, carries with it many, many puzzles to piece together. That's why we at NASA have made it a priority to reach out to partners ... around the world."
NASA currently is developing its Orion capsule, built by Lockheed Martin, to carry astronauts beyond low-Earth orbit and, eventually, to Mars using a new Space Launch System heavy-lift rocket. But as Musk remarked, any crewed flight to Mars will require one or more habitation modules of some sort that would be attached to the launch and return capsule.
Earlier this month, a SpaceX Falcon 9 rocket and Dragon cargo ship delivered an expandable module to the space station that will be evaluated over the next two years as a possible habitat for use in low-Earth orbit for government or commercial space stations or as a habitat for crews on deep space missions.
"I'm hopeful the first people could be taken to Mars in 10 to 12 years," Musk said in 2014. "I think it's certainly possible for that to occur. But the thing that really matters in the long term is to have a self-sustaining city on Mars to make life multi-planetary."
Quelle: CBS
Raumfahrt
« Zum vorherigen Eintrag Zum nächsten Eintrag »
2455 Views
Created with page4