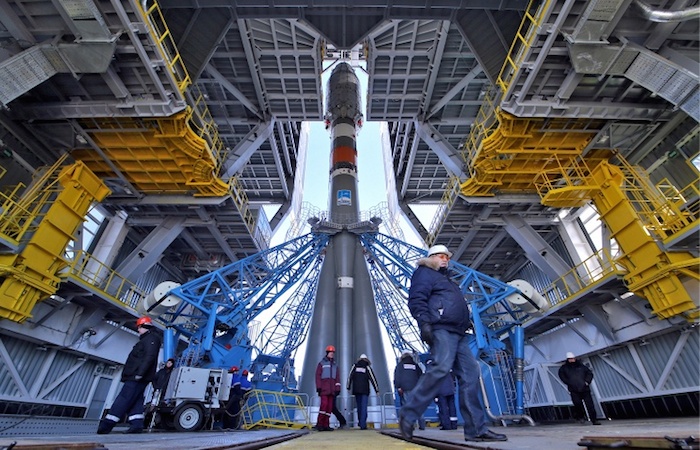 Russia’s Vostochny cosmodrome in the Far Eastern Amur region will be ready for the first rocket launch as early as April 20, Deputy Prime Minister Dmitry Rogozin said on Tuesday.
"I wish to inform you that tomorrow we will be ready to launch our space rocket (from the cosmodrome)," he said at a congress of the Russian Engineering Union.
Previously, Rogozin reported to President Vladimir Putin that all facilities of Russia’s new Vostochny spaceport were technically ready for the first launch. Rogozin told reporters on April 12 that he reported to the Russian president that all the essential launch facilities were technically ready. The deputy prime minister said that the state commission made a decision to schedule the first launch from the Vostochny spaceport for 05:01 am, Moscow time, on April 27.
The Soyuz-2.1a carrier rocket will be blasted off on April 27 to orbit the Aist-2D and Mikhailo Lomonosov satellite, as well as the SamSat-218 nanosatellite.
The construction of the Vostochny space launch center in the Amur region began in 2012. It occupies an area of about 700 square km. It is destined to become the first national facility for civilian space launches, ensuring Russia’s full-scale access to outer space and reducing the dependence of the Russian space industry on the Baikonur space center in Kazakhstan. The first liftoff from Vostochny was initially scheduled for December 25, 2015 but was later rescheduled to 2016.
Quelle: TASS
-
Update: 20.04.2016
- 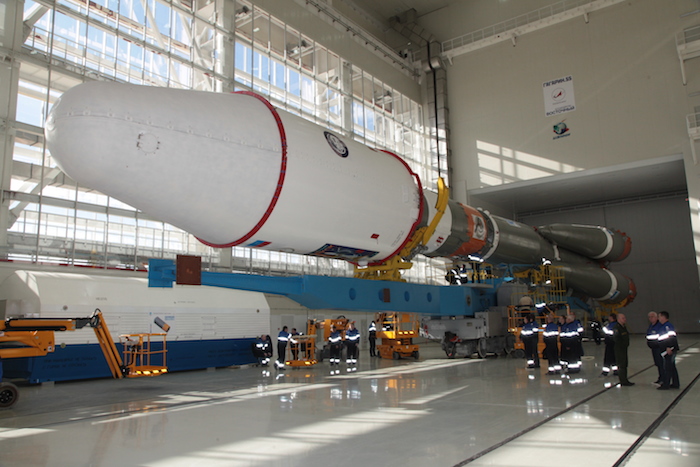 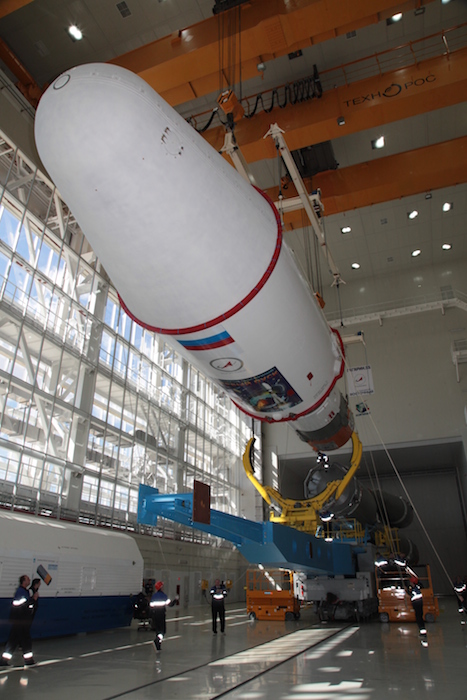 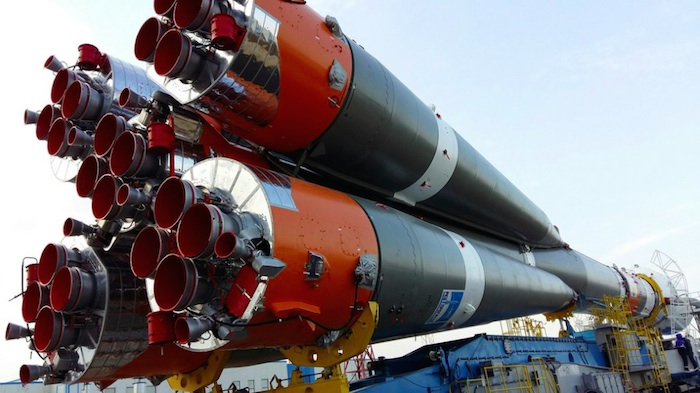 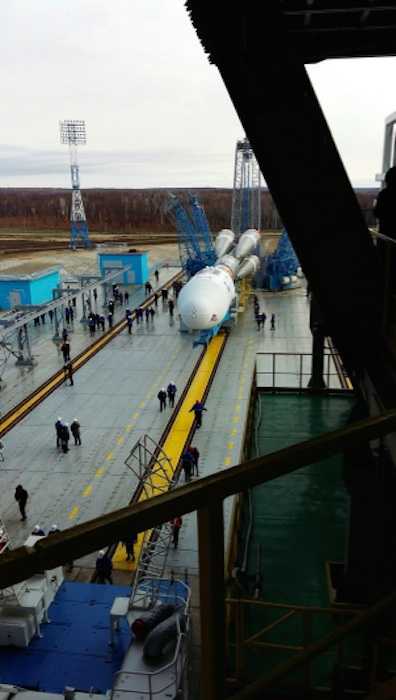 roscosmos
-
Russia Plans First Rocket Launch From Vostochny Cosmodrome
The first launch from Russia's Vostochny Cosmodrome, in the country's Far East, will be held at 5:01 a.m. on Wednesday, April 27, the TASS news agency reported Monday, citing the Russian space agency Roscosmos.
The space agency said that final preparations for the launch of Soyuz 2.1a carrier rocket, expected to deliver three satellites into orbit, are underway.
In a statement published Saturday, Roscosmos said the Soyuz carrier rocket had been successfully installed at the launch site on April 23.
Construction of the Vostochny Cosmodrome began in 2011 and is expected to be completed in 2018 after a series of delays. In October 2015, President Vladimir Putin postponed the initial launch from the cosmodrome, originally scheduled for December, by four months.
The $3 billion cosmodrome, one of Russia's most ambitious and high-profile projects, has been marred by corruption scandals and worker strikes with several construction bosses arrested for embezzling state funds. Russian news agency Interfax reported in April that 21 criminal cases in relation to the construction of the Vostochny Cosmodrome have been opened so far.
Russian officials hope that the spaceport will help reduce the country's dependency on the Soviet-built Baikonur Cosmodrome — which is on lease to Russia from Kazakhstan until 2050 — and that Vostochny will eventually become Russia's main space launch facility.
The Moscow Times
-
Update: 27.04.2016 / 7.00 MESZ
.
ROSCOSMOS Presse-Mitteilung: Automatischer Startabbruch bei 1,5 Minuten vor Start, daher Start für 28.April geplant:
РОСКОСМОС. ИНФОРМАЦИОННОЕ СООБЩЕНИЕ
27.04.2016 05:57
Автоматика дала отбой пуска ракеты космического назначения «Союз-2.1а» с космодрома ВОСТОЧНЫЙ за 1,5 минуты до старта. Резервная дата пуска, 28 апреля, сохраняется. Комиссия изучает причины отбоя пуска. О выводах комиссии будет сообщено дополнительно.
Quelle: Roscosmos
-
Update: 16.45 MESZ
-
Vostochny launch may have been halted after sensor registered deviation — source
-
A source in the rocket and space industry reminded that a recent launch of the Soyuz-ST rocket carrier from the Kourou space center in French Guiana was postponed for 24 hours due to technical reasons
. 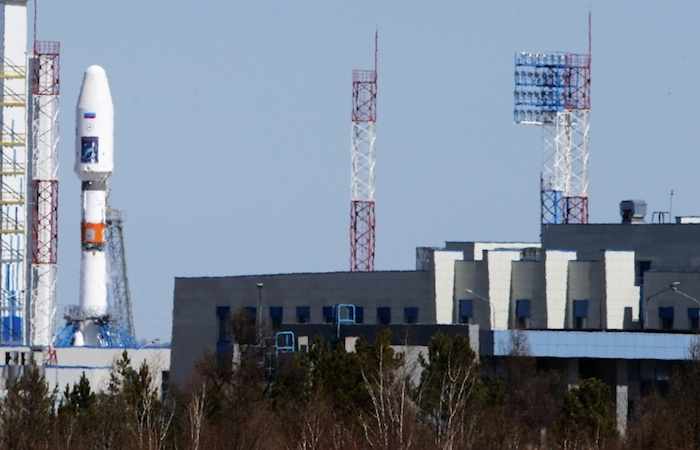 The first rocket launch from Russia’s Vostochny spaceport might have been halted after a sensor registered deviation in one of indicators of Soyuz-2.1a carrier rocket, a source in the rocket and space industry told TASS on Wednesday.
"These are indications of a sensor. I do not know for sure, telemetry should be reviewed, but if automatic systems aborted the launch, this means one of the parameters was beyond parameters set for the rocket," the source said.
He added that there is nothing to worry about. "This is normal, it happens all the time. If automatic systems do not find that the process of preparing for the launch is proceeding normally, if one of the parameters is wrong, then they halt preparations. This happened more than once, and there is nothing to worry about," he explained.
The source reminded that the recent launch of the Soyuz-ST rocket carrier from the Kourou space center in French Guiana was postponed for 24 hours due to technical reasons. "Automatic systems there halted the launch as well, and the carrier rocket was successfully launched the next day. This is routine practice. The same situation occurred in 2014 the launch of the Angara light carrier rocket," he noted.
The first launch from the Vostochny spaceport was due to take place at 5:01 a.m. Moscow time (02:01GMT) on Wednesday. Russia’s government commission at the Vostochny spaceport earlier approved of the decision to carry out the launch. The Soyuz-2.1a space rocket was due to put three satellites - Lomonosov, Aist-2D and SamSat-218 - into orbit.
However, automated control system aborted the launch 1.5 minutes before the scheduled time. The commission is currently investigating the reasons for launch abortion. The launch was preliminarily postponed for 24 hours.
Quelle: TASS
...
Update: 28.04.2016
.
Vostochny Baikonur - der erste erfolgreiche Start
РОСКОСМОС. ПЕРВЫЙ ПУСК С ВОСТОЧНОГО ПРОШЕЛ УСПЕШНО!
28.04.2016 05:10
28 апреля 2016 года в 5:01 мск с первого гражданского космодрома России - космодрома ВОСТОЧНЫЙ - проведен первый пуск. Ракета-носитель «Союз-2.1а» стартовала успешно, и через 8 минут 44 секунды блок выведения (БВ) «Волга» приступил к формированию переходной и целевой орбит для космических аппаратов (КА) «Ломоносов», «Аист-2Д» и SamSat-218 («СамСат-218»).
Отделение КА «Ломоносов» и двух малых космических аппаратов «Аист-2Д» и SamSat-218 запланировано с 7:06 до 7:07 мск, после чего БВ «Волга» будет сведен с орбиты, фрагменты БВ, не сгоревшие в плотных слоях атмосферы, будут затоплены в акватории Тихого океана.
РОСКОСМОС благодарит всех, кто работал для осуществления первого пуска с ВОСТОЧНОГО.
- 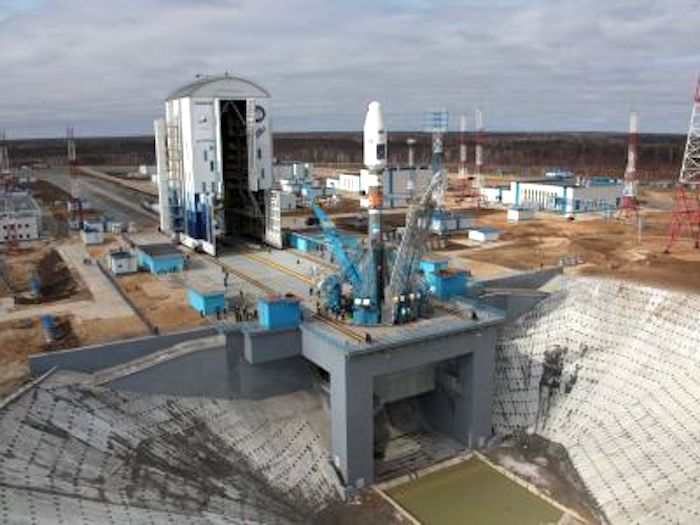 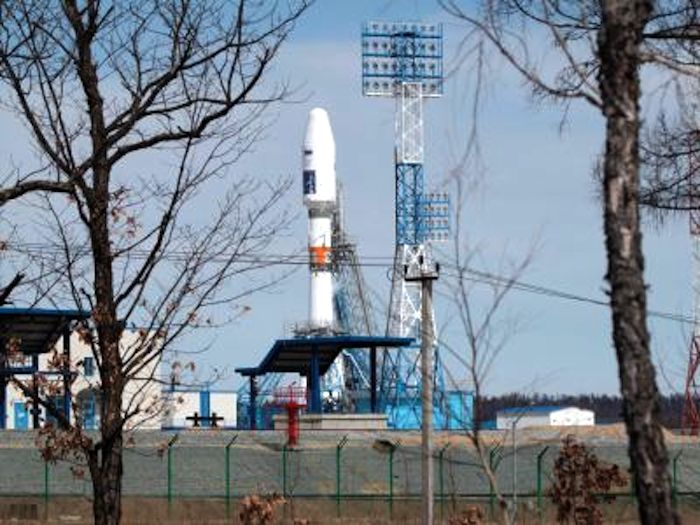 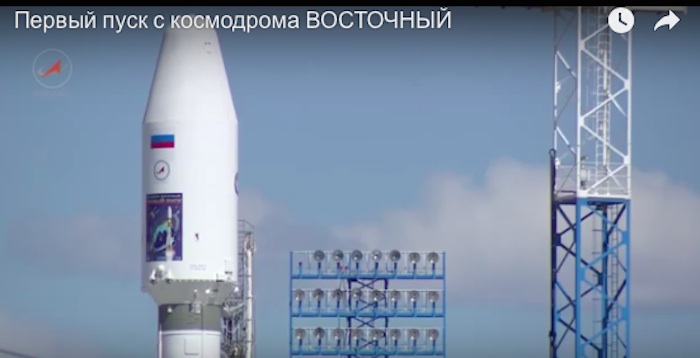 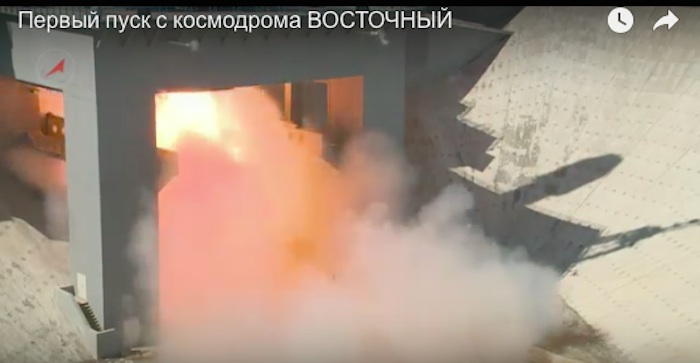 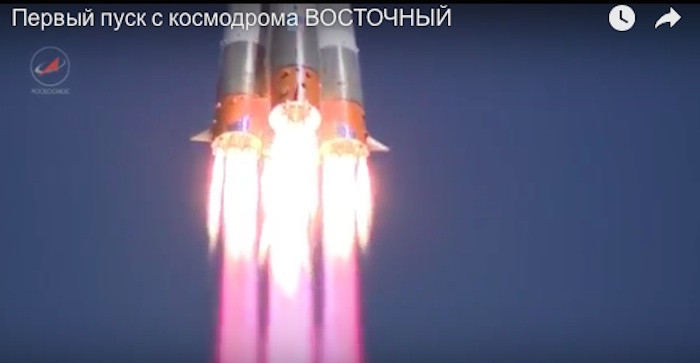 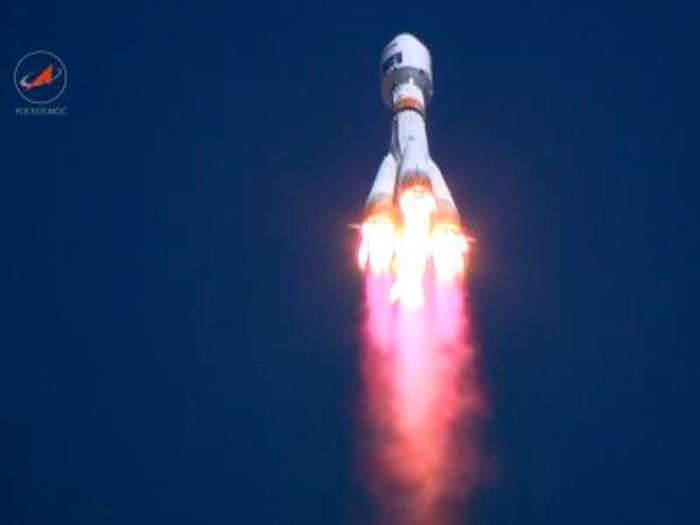 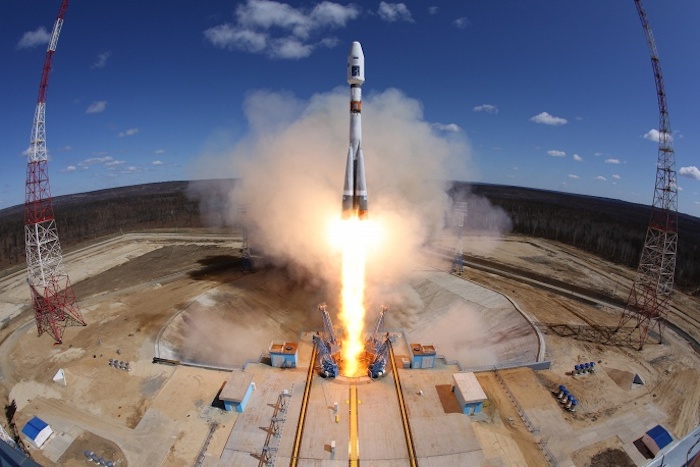 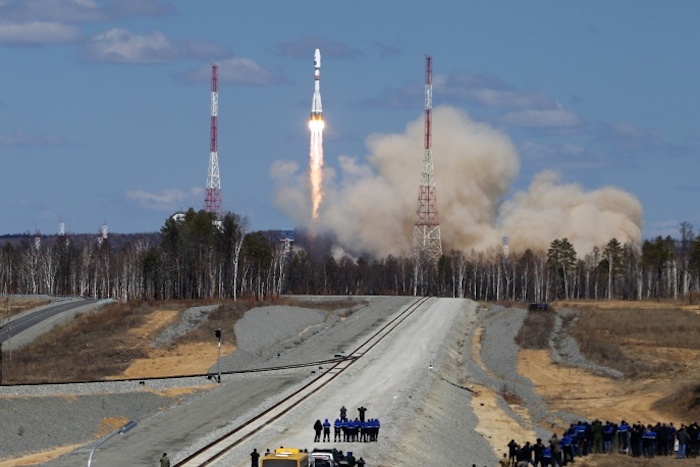 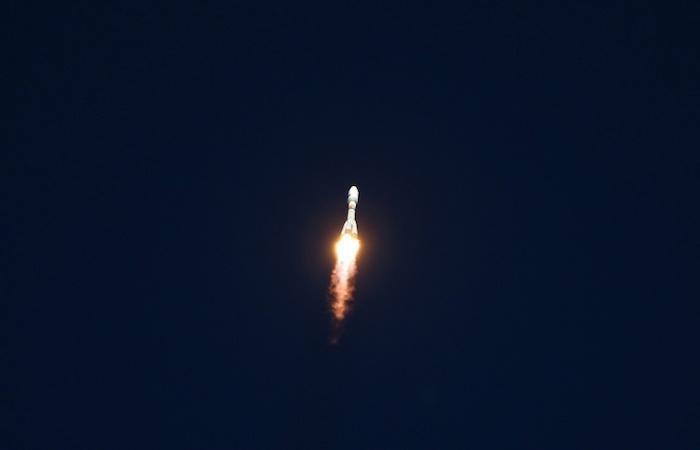 VOSTOCHNY SPACEPORT /Amur Region/,Russian President Vladimir Putin has congratulated Russia’s Roscosmos space corporation and the builders of the Far Eastern Vostochny spaceport on the successful launch of the first carrier rocket on Thursday.
"I would like to congratulate you. You have what to be proud of. Yesterday, the automatics somewhat overplayed. The rocket could have been launched yesterday but the automatics overreacted and halted the blastoff. It is a normal thing," Putin, who watched the launch, said.
"The most important thing is that the spaceport is working," he said, adding that a lot of work is yet to be done to prepare for the launch of a heavy rocket. "But this is obviously a very serious, significant step in the development of Russian space science," Putin stressed.
The Russian president arrived at the Vostochny observation deck some 15 minutes before the launch of the Soyuz-2.1a carrier rocket at 5:01 a.m. Moscow time (02:01GMT) on Thursday. Putin met with the builders who took part in the construction of the cosmodrome.
"We will look at the results of your work. I think there will be no problems with the infrastructure and the rocket system as well, but we will see," the president said. After the launch was successfully carried out and the first stage of the rocket separated, Roscosmos head Igor Komarov told Putin: "The infrastructure on the ground worked as normal."
High quality of automatic control systems of Soyuz-2.1a proved
According to the president, the fact that automatic control systems aborted the first launch of the Soyuz-2.1a carrier rocket on April 27 was a safety measure that confirmed the high quality of the whole system.
"The automatic control system reinsured yesterday, decided to hold preparations one more time. It did not make it worse, on the contrary, everything was done qualitatively, at the highest level. In fact, if you know, they say that you need to eat the pudding to confirm its quality. So, in order to confirm the cosmodrome’s readiness for work, the first launch should be made. You have done this, congratulations," Putin said addressing constructors and employees of the Roscosmos space agency.
He reminded that the presidential decree on the construction of the Vostochny spaceport was signed in 2007. "This is the first part of enormous work. Everything that needed to be done has been done at the highest level," Putin said.
Kremlin chief of staff Sergey Ivanov also congratulated Roscosmos with the successful launch. The president later put his signature on the builders’ hard hats according to tradition.
Quelle: TASS
Raumfahrt
« Zum vorherigen Eintrag Zum nächsten Eintrag »
2982 Views
Created with page4