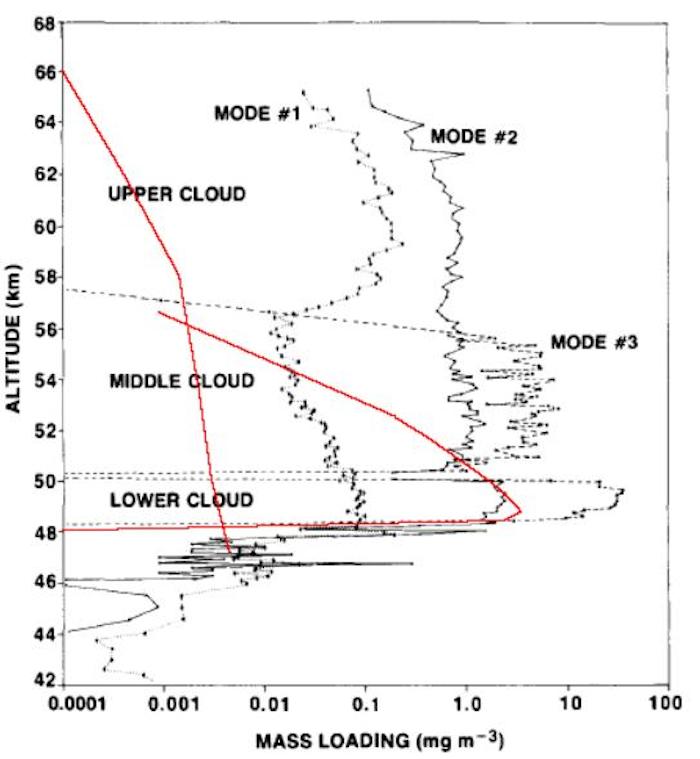 IMAGE: AEROSOL (HIGHLIGHTED IN RED) WITH THE STRUCTURE OF VENUSIAN CLOUDS, OBTAINED FROM DATA OF THE PIONEER VENUS MISSION (MODES 1, 2, AND 3 SIGNIFY THE CONCENTRATION VERSUS ALTITUDE FOR PARTICLES

The beautiful dark stripes on ultraviolet images of Venus's disc are in no way connected with the crystalline sulfur particles in its atmosphere - the ultraviolet is absorbed by another substance. This has been proven by data obtained from the first ever model of the distribution of sulfur in Venus's gaseous envelope which has been developed by the head of MIPT's Laboratory of High Resolution Infrared Spectroscopy of Planetary Atmospheres, Prof. Vladimir Krasnopolsky.
The results of the study have been published in the scientific journal Icarus.
If we look at Venus in a normal optical telescope, we see only a dull yellowish-white sphere without any other distinguishing features. However, if we capture an image in the ultraviolet range, the picture changes drastically - dark and light areas appear on the disc, reflecting the dynamics of the atmosphere.
"These areas mean that somewhere in the upper cloud layer there is a substance that is absorbing UV radiation. Over the past 30 years there have been a wide range of hypotheses as to what this substance could be. Many scientists believed that sulfur particles were responsible for the absorption. But now we will have to abandon this hypothesis," says Krasnopolsky.
He already questioned the "sulfur hypothesis" in 1986 by demonstrating that the amount of the aerosol was not enough to explain the effect of UV absorption. In the new paper, Krasnopolsky presents the first photochemical model of the formation of sulfur particles in Venus's clouds. In particular, the model included certain processes of the breakdown of sulfur compounds under the influence of light that had not been studied in previous models. As a result, a profile was compiled of the concentration of sulfur aerosol at various altitudes.
The model showed that sulfur aerosol is predominantly found in the lower cloud layer. Its mass constitutes approximately one tenth of the layer and it is not externally visible. However, observations in the near UV radiation range obtained from the Soviet interplanetary station Venera 14 indicate that absorption in this range occurs in the upper cloud layer at the altitude of approximately 60 km.
"This means that sulfur aerosol cannot be the cause of absorption of Venus's atmosphere in the near UV range," concludes Krasnopolsky.
In his opinion, the main absorber and "artist" drawing the stripes on Venus's disc could be ferric chloride (FeCl3), which was discovered in the planet's atmosphere by the X-ray fluorescence spectrometer on board Venera 12.
The cloud layer of Venus is mainly composed of liquid droplets of sulfuric acid (H2SO4). In 1981, the Space Research Institute of the RAS conducted laboratory tests of the reflection coefficient in the near UV range for a 1% solution of ferric chloride in sulfuric acid, and their results are fully consistent with the observations of the present study.
"We can therefore consider this mixture of sulfuric acid and ferric chloride to be the most likely substance causing this very mysterious UV absorption," says Krasnopolsky.
Quelle: AAAS, MOSCOW INSTITUTE OF PHYSICS AND TECHNOLOGY
Astronomie
« Zum vorherigen Eintrag Zum nächsten Eintrag »
2246 Views
Created with page4