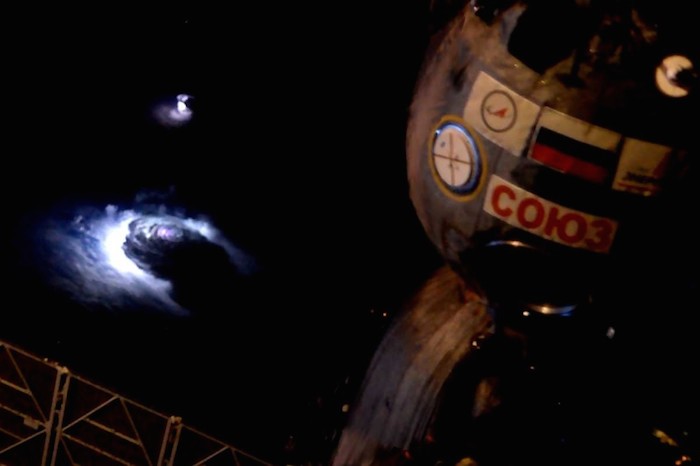 It’s the ultimate light show that happens above clouds during thunderstorms.
Weird lights up to a dozen kilometres long called blue jets, mysterious blue blobs called glimpses and upward slithers of red light called C-sprites have all been recorded from the International Space Station.
Danish astronaut Andreas Mogensen captured the footage and photos, which  were presented at the European Geosciences Union meeting in Vienna last week.
“We wanted to see what happens above a thunderstorm,” says Olivier Chanrion of the Danish National Space Institute in Lyngby,  who co-founded the THOR project to observe the effects from the space station. “What we see is that at the top of the cloud in what we call the ‘turrets’, there is incredible activity.”
Dancing on the clouds
Blue jets – projections that fan out and upward as far as 12 kilometres – have been seen before, as have the sprites, but the blue blobs were a real surprise. Each was a few kilometres across then petered out rapidly (see video below).
.
Video-Fram: 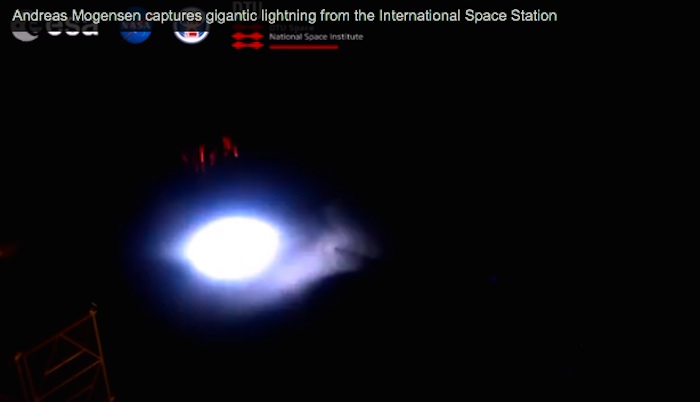 “They were dancing over the top of the cloud, and we called them glimpses,” says Chanrion. “We sometimes saw around 100 glimpses per minute, and we think they’re integrated between the top and bottom layers of the cloud. But it’s only a first step and we need to find out more.”
In all, Mogensen took 160 stills and four videos from the cupola window of the ISS. The violent storms he shot were over Mexico, Eastern India, Thailand and Costa Rica.
“We used forecasts to decide which storms would be of interest and sent him messages telling him where to point his camera,” says Chanrion.
Striking upwards
At the same meeting, Torsten Neubert, also of the Danish National Space Institute, presented images of upside-down lighting, taken in India by Rajesh Singh of the KSK Geomagnetic Research Laboratory in Allahabad, India. Singh took the shots from the ground in the east of the country.
In the images, gigantic upwards jets of lightning in fern-like arrangements sprout from the middle of violent monsoon thunderclouds. The bolts reached upwards for anything from 14 to 18 kilometres, shorting out and disappearing at the boundary with the ionosphere, at altitudes of 80 kilometres.
. 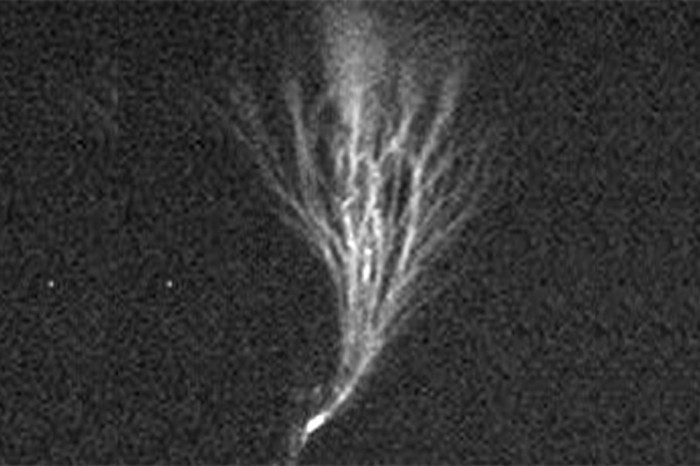 Which way’s up?
Indian Institute of Geomagnetism
“They only last around 20 to 40 milliseconds,” says Neubert, who likens a thunderstorm to a battery wedged between two conductors – Earth and the ionosphere. Mostly, the battery shorts out by striking Earth, but it can also short out by striking upwards.
Neubert says the phenomena are worth studying because so little is known about lightning, how it behaves and forms within clouds.
Quelle: NewScientist
Raumfahrt
« Zum vorherigen Eintrag Zum nächsten Eintrag »
2314 Views
Created with page4