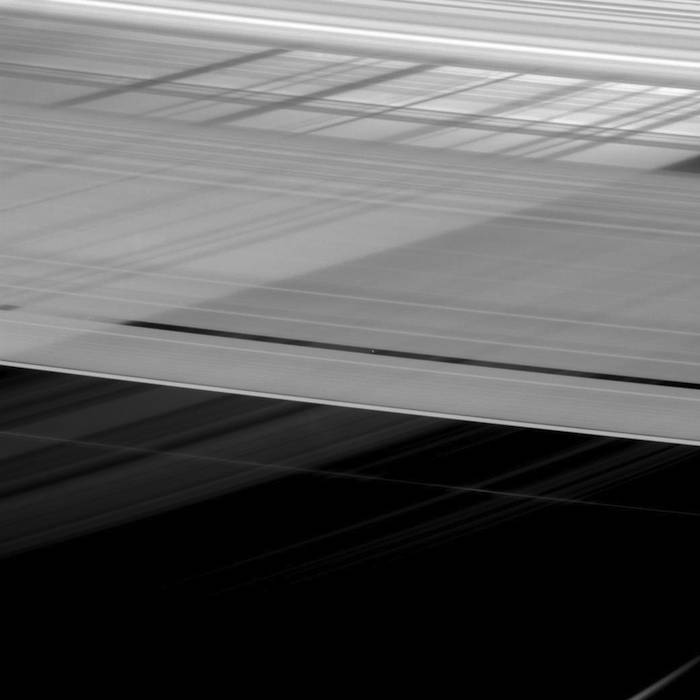 At first glance, Saturn's rings appear to be intersecting themselves in an impossible way. In actuality, this view from NASA's Cassini spacecraft shows the rings in front of the planet, upon which the shadow of the rings is cast. And because rings like the A ring and Cassini Division, which appear in the foreground, are not entirely opaque, the disk of Saturn and those ring shadows can be seen directly through the rings themselves.
Saturn's rings have complex and detailed structures, many of which can be seen here. In some cases, the reasons for the gaps and ringlets are known; for example, Pan (17 miles or 28 kilometers across) -- seen here near image center -- keeps open the Encke gap. But in other cases, the origins and natures of gaps and ringlets are still poorly understood.
This view looks toward the sunlit side of the rings from about 14 degrees above the ring plane. The image was taken in visible light with the Cassini spacecraft narrow-angle camera on Feb. 11, 2016.
The view was acquired at a distance of approximately 1.2 million miles (1.9 million kilometers) from Pan and at a Sun-Pan-spacecraft, or phase, angle of 85 degrees. Image scale is 6 miles (10 kilometers) per pixel.
The Cassini mission is a cooperative project of NASA, ESA (the European Space Agency) and the Italian Space Agency. The Jet Propulsion Laboratory, a division of the California Institute of Technology in Pasadena, manages the mission for NASA's Science Mission Directorate, Washington. The Cassini orbiter and its two onboard cameras were designed, developed and assembled at JPL. The imaging operations center is based at the Space Science Institute in Boulder, Colorado.
Quelle: NASA
Astronomie
« Zum vorherigen Eintrag Zum nächsten Eintrag »
2200 Views
Created with page4