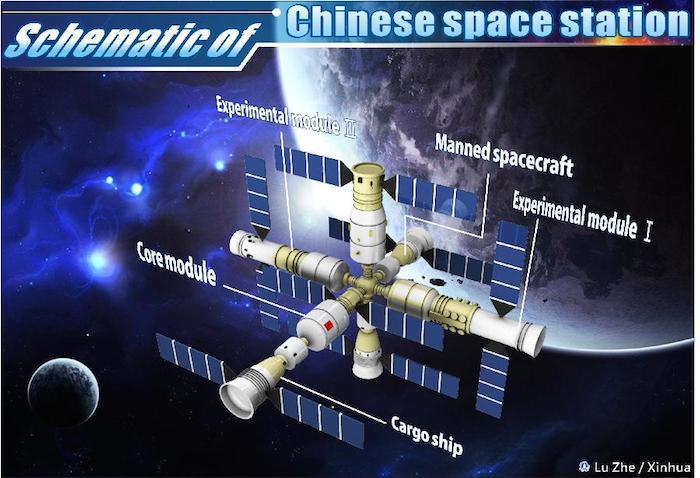 The graphic shows the schematic image of Chinese space station. (Xinhua/Lu Zhe)
-
BEIJING, China is open to space cooperation with all nations including the United States, the heavyweights of China's space program said on Sunday, the anniversary of China's first satellite launch 46 years ago.
"China will not rule out cooperating with any country, and that includes the United States," said Yang Liwei, China's first astronaut.
Payload has been reserved in the Chinese space station, due to enter service around 2022, for international projects and foreign astronauts, said Yang on the occasion of the first China Space Day, an annual celebration newly designated by the government.
Upon request, China will also train astronauts for other countries, and jointly train astronauts with the European space station, Yang said.
"The future of space exploration lies in international cooperation. It's true for us, and for the United States too," according to the senior astronaut.
His words were echoed by Zhou Jianping, chief engineer of China's manned space program. Zhou said, "It is well understood that the United States is a global leader in space technology. But China is no less ambitious in contributing to human development."
"Cooperation between major space players will be conducive to the development of all mankind," Zhou added.
Citing security reasons, the U.S. Congress passed a law in 2011 to prohibit NASA from hosting Chinese visitors at its facilities and working with researchers affiliated to any Chinese government entity or enterprise.
The ban remains in effect.
The U.S.-dominated International Space Station, which unsurprisingly blocks China, is scheduled to end its service in 2024. China's space station could be the only operational one in outer space, at least for a while.
Commenting on Sino-U.S. space relations earlier this week, Xu Dazhe, the head of China's National Space Administration, cites Hollywood sci-fi blockbuster "The Martian," in which a U.S. astronaut gets stranded on Mars and is eventually brought back to Earth by NASA, with help from China.
Xu Dazhe noted that China and the United States established a special dialogue mechanism last year and talks would continue this year.
For chief engineer Zhou, the movie simply reflects what most people want. "Many American astronauts and scientists that I have met said they would like to work with us, if given the freedom of choice."
The China Space Day was designated to mark the launch of China's first satellite on April 24, 1970.
Quelle: Xinhua
Raumfahrt
« Zum vorherigen Eintrag Zum nächsten Eintrag »
2395 Views
Created with page4