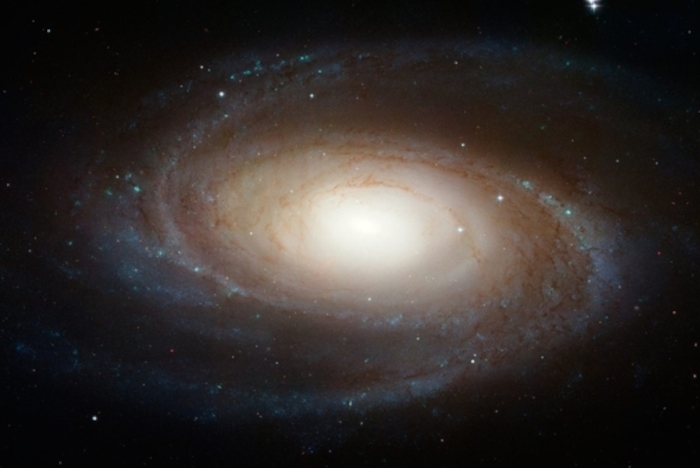 Ultradiffuse galaxies seem to be the same size as giant galaxies, like the magnificent spiral galaxy M81 pictured here. But unlike giant galaxies, which can contain hundred of billions or even trillions of stars, ultradiffuse ones harbor only tens to hundreds of millions. The origins of the ghostly galaxies remain mysterious. Credit: NASA/ESA/STScI/AURA
-
Astronomers have long recognized that galaxies come in a variety of forms, and that any galaxy’s size and shape offer a glimpse of its history. A fast-spinning giant galaxy whips up a beautiful spiral pattern like that of our familiar Milky Way; if two giant spiral galaxies collide, they may become an even bigger star swarm called an elliptical galaxy. Around all these mighty giants, diminutive “dwarf” galaxies dance by the dozens—these may be leftovers from the giants’ formation. Recently, however, observers have uncovered enormous numbers of galaxies in an odd new form that is not so easily explained.
In 2014 astronomers led by Pieter van Dokkum of Yale University pointed a sensitive array of small telescopes at a galaxy cluster in the constellation Coma Berenices and were astonished to discover 47 “smudges” all over the resulting images. The smudges were not somebody's fingerprints; they were ghostly galaxies that appeared to be bizarre hybrids of giants and dwarfs. Like giants, they were as large as the Milky Way; like dwarfs, they were dim, emitting roughly a thousandth as much light. The two opposing traits account for their strange appearance: They look dim and ghostly because their relatively few stars are spread out over a huge volume of space.
Moreover, these “ultradiffuse” galaxies proved to be surprisingly common. When astronomers looked more closely at the Coma cluster using the 8.3-meter Subaru Telescope, they spotted more than 800 additional examples, and searches through archival data revealed that the first few members of the class appeared in observations from the 1980s. Faced with so many oddities, theorists are now crafting new models to explain how this profusion of galactic phantoms arose.
. 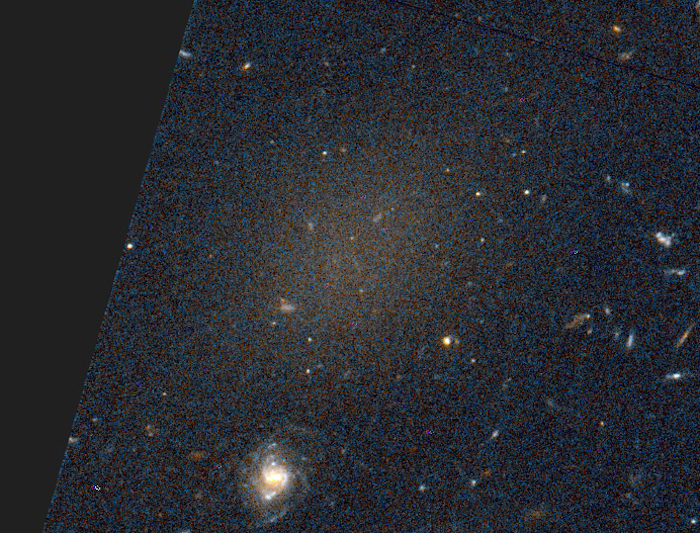 Pale and ghostly, ultradiffuse galaxies, such as this one in the Coma Cluster, abound in large numbers, but no one knows exactly how they arose.
Credit: Hubble Space Telescope. NASA, ESA and Pieter van Dokkum (Yale University) et al
-
Van Dokkum’s favored scenario is that ultradiffuse galaxies are failed giants. In this model galaxies as massive as the Milky Way failed to light up because they had the misfortune to fall into a galaxy cluster, which stripped them of their gas. Without large amounts of gas, such galaxies could not spawn new stars, so these giants faded into their present dim, diffuse state.
Now, however, Nicola Amorisco and Avi Loeb of the Harvard–Smithsonian Center for Astrophysics have proposed a different idea to explain ultradiffuse galaxies. “They are dwarf galaxies,” Amorisco says. “This is what allows them to be so numerous.”
The key to the new proposal is spin. Different dwarf galaxies are born spinning at different speeds. As a large object—galaxy, star or planet—contracts under the force of gravity, the conservation of angular momentum magnifies any slight initial rotation into a significant, measurable spin. If a dwarf happens to be born spinning slowly, gas plunges toward the galaxy's center, forming stars over a compact region. But if a dwarf is born spinning fast, infalling gas instead keeps its distance from the galaxy’s center, forming stars over a much larger volume. In the new proposal, which Amorisco and Loeb recently published in Monthly Notices of the Royal Astronomical Society, ultradiffuse galaxies are the dwarfs born spinning so fast they formed their stars over a truly vast expanse. “I like the idea, because it’s testable,” van Dokkum says. “I kind of hope it’s not true, because to me it’s a less interesting option” than the failed-giant scenario.
The new theory makes a simple prediction about ultradiffuse galaxies: If they are dwarfs, “they should be everywhere,” Amorisco says. In contrast, if the galaxies are failed giants that owe their existence to the gas-stripping influence of galaxy clusters, then galaxy clusters should be the only cosmic homes for ultradiffuse galaxies. Galaxy clusters have so much gravitational pull that they are hard to escape—once a galaxy falls in, it cannot climb back out. So far, nearly all known ultradiffuse galaxies have turned up in clusters rather than in more modest galactic gatherings known as groups, but others may pop up elsewhere as astronomers begin to search for them more thoroughly.
Another way to distinguish between failed giants and fast-spinning dwarfs is to measure the mass of an ultradiffuse galaxy—something that Michael Beasley of the Institute of Astrophysics of the Canary Islands and his colleagues recently accomplished. Beasley’s galaxy lies in the Virgo Cluster of galaxies and is about 8 percent as massive as the Milky Way. According to Loeb, this supports the idea that the galaxy formed as a fast-spinning dwarf, but van Dokkum says the galaxy is anomalously dim even by ultradiffuse standards, making it an unsuitable outlier from which to make major extrapolations about the class as a whole. “It’s fascinating that people cite the same galaxy to support such different ideas,” van Dokkum says.
Normally, such a ghostly galaxy would be too difficult for observers to weigh but Beasley's team circumvented that problem by measuring how fast seven bright globular star clusters are orbiting the galaxy. Van Dokkum says the very prescence of globular clusters supports his view that ultradiffuse galaxies are giants, because most dwarf galaxies don't have any. But Amorisco counters that Beasley’s galaxy has far fewer globular clusters than giant galaxies typically do.
Van Dokkum hopes to have an answer soon. During January, March and April of this year, he and his collaborators stared at three ultradiffuse galaxies in the Coma Cluster with the mammoth Keck Telescope for a lengthy 34 hours. “That's what it takes,” he says. After analyzing the data, he should know how fast the stars of those galaxies move, and thus how massive their hosts are—revealing whether or not this newly recognized breed of galaxies are fast-spinning dwarfs or instead a race of giants that failed to shine. Stay tuned.
Quelle: SCIENTIFIC AMERICAN
Astronomie
2220 Views
Created with page4